TPP-11 on track to take effect in mid-January TOKYO -- The 11-country Trans-Pacific Partnership is expected to go into force in mid-January, with signatories topping the required six by November, creating a multilateral free trade bloc covering 15% of global trade.

New Zealand, Australia, Vietnam and Canada are on track to complete the ratification process by November, joining Japan, Mexico and Singapore, which have already done so. The pact kicks in 60 days after six or more members ratify it.

The formation of a free trade zone spanning the Asia-Pacific comes at a time when the Trump administration seeks to gain America-friendly trade deals through a mixture of bilateral negotiations and the threat of tariffs.

Japan, which is about to enter bilateral trade talks with Washington, has been leading TPP negotiations after the U.S. dropped out in early 2017. Toshimitsu Motegi, the economic revitalization minister in charge of the negotiations, has confirmed the estimated timeline and notified Prime Minister Shinzo Abe of the progress on Monday.

New Zealand Trade and Export Growth Minister David Parker told Parliament last week that the government hopes to ratify the TPP-11 "in the coming weeks." Motegi will speak with Parker on Tuesday to confirm the nation's plan. 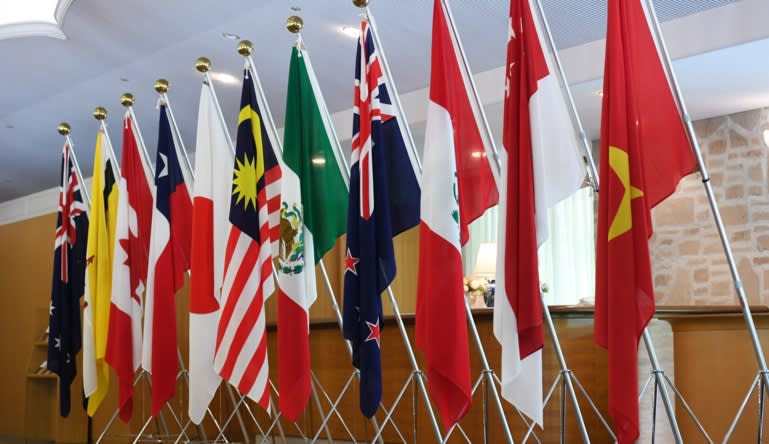 The 11-country version of the Trans-Pacific Partnership is on schedule to go into force this coming January and may welcome more members in mid-2019. (Photo by Tsuyoshi Tamehiro)

Vietnam begins its parliamentary deliberations on Monday. "Vietnam is striving to be one of the first six country members to ratify" the pact, Prime Minister Nguyen Xuan Phuc said on a visit to Japan earlier this month. Legislative approval is expected by Nov. 12.

Canada is scheduled to conclude parliamentary discussions this week, with plans to complete the process in mid-November.

The 11-member TPP -- formally renamed the Comprehensive and Progressive Agreement for Trans-Pacific Partnership, or CPTPP -- will cover 13% of global gross domestic product. Eventually, 99.9% of Japan's industrial exports and 98.5% of farm exports will enjoy tariff-free market access. For automobiles, Canada's 6.1% tariff will be lifted in five years, and Vietnam's 70%-plus tariff on large vehicles will be dropped in 10 years.

After the agreement takes effect, ministers of member countries will meet to discuss inviting nations that have expressed interest in joining, such as Thailand and the U.K. Expansion is targeted for mid-2019 at the earliest.

Japan is eager to see the pact take effect early next year. With talks with Washington on a bilateral trade agreement kicking off as early as Jan. 16, having the TPP-11 in effect by then would enable Japan to use it as a baseline in negotiating duties on agricultural goods.