Taiwanese President Tsai Ing-wen and Chinese President Xi Jinping. Taiwan and China are in a period of a notably adversarial relationship, and this tension is driving their diplomacy towards each other and the rest of the world. (Source photo by AFP/Jiji and AP)
CHRIS HORTON, Contributing writer, and LAULY LI and CHENG TING-FANG, Nikkei staff writersApril 23, 2020 14:47 JST | Taiwan
CopyCopied

TAIPEI -- Elvin Huang never imagined he'd be a general on the front lines of the global battle against the coronavirus pandemic, but that's exactly what he is now. As general manager of the medical product company Taiwan Stanch, he's supplying Taiwan and other countries with an invaluable weapon in this war: surgical masks.

But the masks are dual-use. Not only do they help prevent the spread of the virus in Taiwan, they are helping spread the message that Taiwan can help other countries deal with the pandemic -- if the world chooses to engage it without worrying about upsetting China.

Two million face masks arrived in Japan from Taiwan this week to equip medical workers in their fight against the coronavirus pandemic. In a diplomatic sense, the donor was as invisible as the virus itself.

China's ruling Communist Party claims Taiwan as its territory, despite having never ruled it. Over the past 70 years, Beijing has used its growing political and economic power to gradually isolate Taiwan. But with Taiwan arguably flattening the infection curve better than anywhere else on the planet, countries around the world are increasingly looking to it for help. One of the most visible symbols of that has been surgical masks.

"We really feel like we are fighting a prolonged war... it's very exhausting," Huang told the Nikkei Asian Review. "All of my employees are working more than 12 hours a day, but we feel very honored that we are actually helping our own people to get enough masks, and now we are helping our country with mask diplomacy."

Inside Taiwan Stanch's mask factory in New Taipei City, the company works with the government and the military. Dozens of employees wearing cleanroom suits work in shifts to turn out up to 1 million masks daily. Some 25 soldiers assist with packaging, and an official from the Ministry of Economic Affairs liaises with mask equipment suppliers and materials suppliers when needed. Postal vehicles arrive twice daily to pick up the masks, all under police supervision. 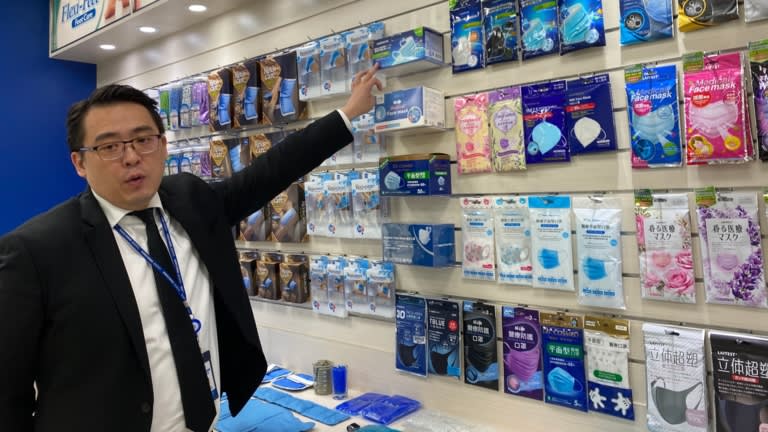 Elvin Huang, general manager of the medical product maker Taiwan Stanch, shows off his company's range of masks at a factory in New Taipei City. (Photo by Lauly Li)

In late January, Taiwan's total mask production capacity was less than 1.9 million units per day. Now that number is 15 million and it is projected to reach 20 million soon -- a result of direct coordination between the government, mask manufacturers and machine-tool makers. Taiwan has already donated millions of masks to the U.S., Europe, Japan and elsewhere in the Asia-Pacific region.

"Taiwan's competence has thwarted Beijing's attempts to isolate and erase it," said Natasha Kassam, a former Australian diplomat in Beijing who is now a research fellow at the Sydney-based Lowy Institute.

"Taiwan is maximizing this opportunity, demonstrating itself to be a responsible and capable country in the international community at a time of crisis," she said. "At a time when the United States, China and the World Health Organization have not stepped up to the plate, Taiwan stands out and cannot be ignored."

Taiwan's performance comes not despite but because of its exclusion from the World Health Organization at China's behest.

Taiwan's suspicion of both after it was hit hard by sudden acute respiratory syndrome in 2003, has proven to be what saved it -- along with its universal health care system. Taipei established a National Health Command Center in the wake of SARS to coordinate epidemic responses. On Jan. 21, both Taiwan and the U.S. confirmed their first coronavirus cases. The following day, Taiwan activated the NHCC, putting itself firmly on the offensive in the fight against the virus. 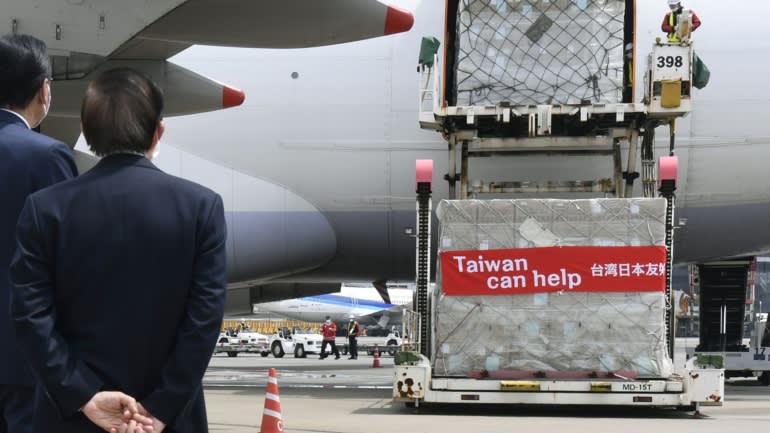 Packages of face masks from Taiwan are unloaded from a cargo plane at Narita Airport near Tokyo on April 21.   © Kyodo

Taiwan's success -- as of Wednesday, it had recorded a total of 426 infections and six deaths -- has spurred Japanese Prime Minister Shinzo Abe, Canadian Prime Minister Justin Trudeau and U.S. Secretary of State Mike Pompeo to call for greater Taiwanese inclusion at the WHO. A secretive 2005 memorandum of understanding between Beijing and the U.N. body, however, effectively gives China the authority to decide whether Taiwan is allowed even observer status.

"Greater international pressure on the WHO may help Taiwan become able to send experts to more technical meetings," said Bonnie Glaser, director of the China Power Project at the Center for Strategic and International Studies, a Washington think tank.

But China has huge influence in most U.N.-affiliated bodies and is strongly opposed to allowing Taiwan to enhance its status as long as it refuses to accept Beijing's "One China" principle, which posits that Taiwan is part of China.

Despite Beijing's efforts to isolate Taiwan, the island has raised its profile significantly in Europe. European Union officials and diplomats from member states have recently taken to Twitter to thank Taiwan for its mask donations.

"The pandemic has definitely put Taiwan in the spotlight in a positive way," said one Taipei-based diplomat from an EU member state. In his home country, he said, "there are many 100% positive articles about Taiwan's performance during the pandemic, both from the media and think tanks." Commentary on China, he said, has been more of a mix of negative and positive. 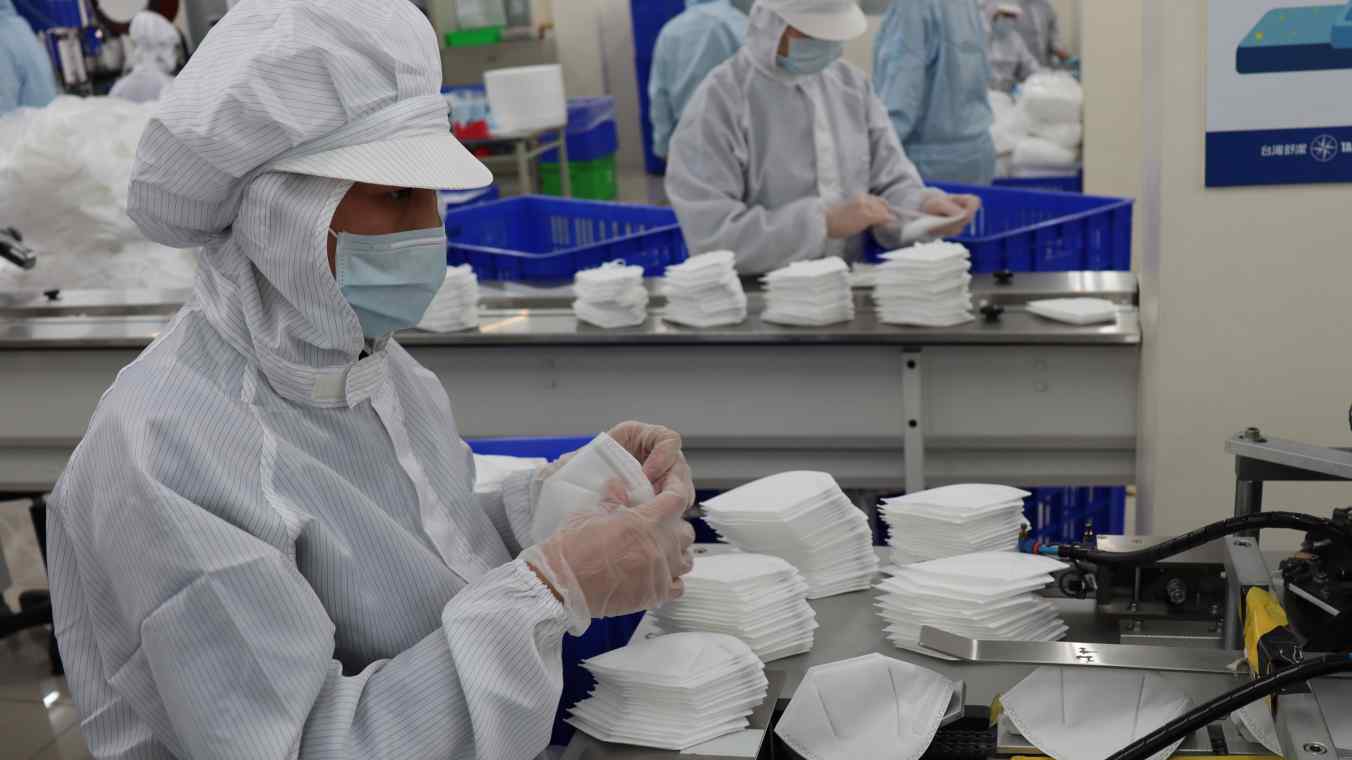 "The uptick in international attention on Taiwan is because it provides a point of comparison to China," she said. "Taiwan has defeated the first wave of the virus, apparently so has China. But Taiwan's success has taken place with limited shutdowns, transparent and democratic government and without WHO support."

Beijing has sought to rewrite its part in the pandemic from being the government that covered up the initial outbreak to a more savior-like role. This comes as Chinese diplomats have adopted a more strident tone.

China has donated or sold defective medical products to multiple European countries while it ham-handedly tries to demand gratitude from the world. A combative new tone from its Foreign Ministry, including spokespeople spreading conspiracy theories that the U.S. military released the coronavirus in Wuhan last year, contrasts starkly with Taiwan's more relatable politicians.

"China's current diplomatic style is distinctly belligerent, and this has been the case for a number of years now," said Mark Harrison, a senior lecturer in Chinese studies at the University of Tasmania in Australia.

"China's diplomacy was also so in the Mao period, especially when radicals took control of the Ministry of Foreign Affairs during the Cultural Revolution, and their language reflected those politics," Harrison said. "The rhetoric today is more nationalist, but China is also a global superpower, so its international actions have a greater impact." Workers on the production line at Taiwan Stanch. (Photo by Lauly Li)

Taiwan appears to have reversed decades of isolation in just a matter of weeks, but where does it go from here?

Membership in the U.N. or other international organizations appears unlikely, as does the prospect of countries switching recognition from Beijing to Taipei. Taiwan's best bet will likely be to expand its unofficial relationships with capitals around the world as much as possible in order to solidify its gains.

This moment harks back to the days when Taiwan's authoritarian government, Chiang Kai-shek's Republic of China, which was based in China until it lost to Mao's Communists in 1949, fought for recognition over which was the rightful government of China. Back then, the struggle was one of dollar diplomacy, with both Chiang's Kuomintang and Beijing's Chinese Communist Party seeking to buy friends and allies.

"In the '70s and '80s, Taiwan had a greater level of diplomatic recognition and the People's Republic of China was only just emerging from its Maoist isolation," Harrison said. "Taiwan at that time more closely resembled China today in its belligerent diplomatic style and influence-seeking, and indeed the CCP learned much from the Kuomintang about this style of politics over many decades."

Now that Taiwan is a democracy whose ruling party identifies as Taiwanese rather than Chinese, its domestic political situation is vastly different from four decades ago. Yet, as Mark Twain famously noted, history doesn't repeat itself, but it does rhyme.

"Although the viewpoints and the politics have changed, Taiwan and China are in a period of a notably adversarial relationship," Harrison said. "This tension is driving their diplomacy towards each other, and more broadly with the rest of the world."