Taiwan in US-Japan statement: show of resolve or diplomatic calculus? 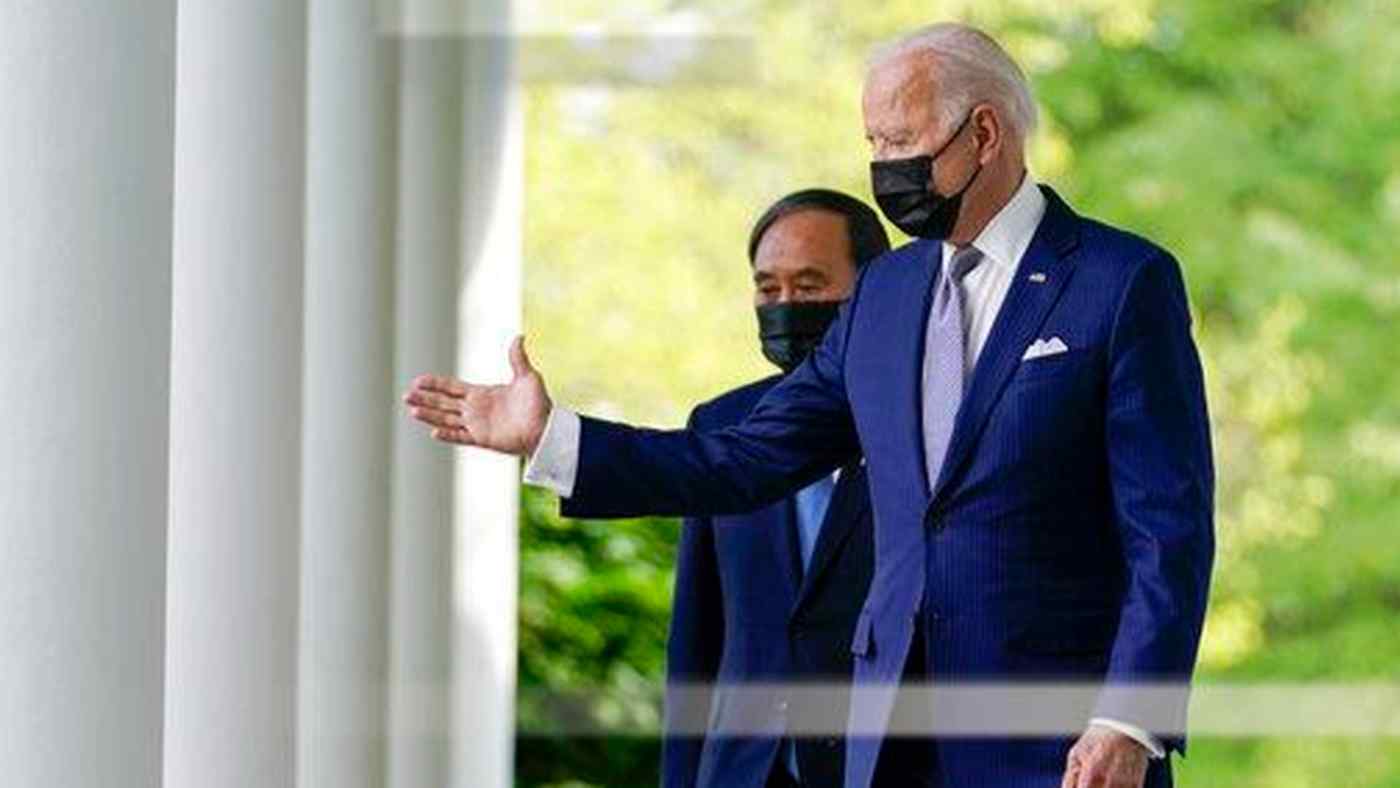 WASHINGTON/TOKYO -- The highly anticipated mention of Taiwan in a joint statement by U.S. President Joe Biden and Japanese Prime Minister Yoshihide Suga has left much to interpretation.

"We underscore the importance of peace and stability across the Taiwan Strait and encourage the peaceful resolution of cross-strait issues," the statement reads. The document was issued after the leaders met for the first time face-to-face on Friday.

This was the first time since 1969 that the island was mentioned in a post-summit document by the leaders of the two nations. At the same time, it is a bland, vanilla collection of nonemotional words calling for peace and stability in the Taiwan Strait.

It was likely the culmination of the back-and-forth between the two countries, with Biden wanting to take a stand on China and Suga not wanting to burn all bridges with Beijing.

The Biden administration is increasingly focusing on protecting the democratic, self-ruled island and is leaning on allies to toe the line. China is stepping up pressure on Taiwan with its bomber jets making frequent incursions into the island's airspace. Allowing Beijing to change the "status quo" by force would shatter global confidence in the U.S. It was imperative for Washington to demonstrate a strong resolve to deter Chinese threats.

But the Japanese side had its own diplomatic calculations to consider. It wants to avoid provoking China, a neighbor whose economy is tightly intertwined with its own. Loath to see a military conflict unfold in the region, Japanese negotiators succeeded in tempering the statement by including the wording "encourage the peaceful resolution of cross-strait issues."

Some in the Japanese government even said there was no need to bring up Taiwan given that the issue was stipulated in a statement issued by the two nations' diplomacy and defense chiefs after their two-plus-two meetings in Tokyo.

Kazuhiro Maeshima, a professor at Sophia University, noted that the document used bland language devoid of "adjectives and adverbs."

Yasuhiro Matsuda, a professor at University of Tokyo, had a different take, saying the wording seemed slightly stronger than that of the two-plus-two statement.

"In addition to the importance of peace and stability in the Taiwan Strait mentioned in the two-plus-two document, the statement also encouraged 'the peaceful resolution of cross-strait issues,'" he said. "This is as if to imply that China, not Taiwan, is responsible for impeding peace." The document also touched on lessening both nations' dependence on China. It promised cooperation "on sensitive supply chains, including on semiconductors, promoting and protecting the critical technologies that are essential to our security and prosperity."

But Mari Iwashita, chief market economist at Daiwa Securities, warns of a possible response from China that could dry up key supply chains.

"Depending on China's response, the issue of peace and stability in the Taiwan Strait could affect the Japanese economy," Iwashita said.

Noting that China accounts for roughly 20% of Japanese exports, Iwashita said, "If China resorts to import restrictions from Japan, supply chains dependent on imports, such as those for chipmaking equipment and auto parts will suffer. Some companies will be forced reconfigure their supply-chain networks."

In 1969, President Richard Nixon and Prime Minister Eisaku Sato were worried about the Soviet Union extending its sphere of influence to the entire Korean Peninsula and Taiwan, and felt compelled to mention the island in their statement.

After both the U.S. and Japan normalized diplomatic relations with Beijing, their post-summit documents stopped mentioning Taiwan, which Beijing regards as a province of the People's Republic of China. As their economies become more connected to China, both countries chose to avoid provoking Beijing. Meanwhile, China's economic growth also propelled military expansion, with frequent maritime incursions in the East and South China seas. Calls for reunification with Taiwan have grown in a more affluent and confident China.

As its military became more assertive, China has increased its defense capabilities by installing missiles along the coast, making it difficult for U.S. forces to approach the mainland.

As Washington sees it, failing to defend countries and regions that share its democratic values would shake the U.S.-led world order. China has already begun to limit democracy in Hong Kong.

For its part, Japan promised "to bolster its own national defense capabilities to further strengthen the alliance and regional security."

The statement also brings up host nation support, "resolving to conclude in a timely manner a meaningful multiyear Host Nation Support agreement to ensure the stable and sustainable stationing of the U.S. forces in Japan."