Taiwan lifts ban on foreign students, but keeps Chinese out TAIPEI -- Taiwan lifted an entry ban on returning international university students earlier this month, in yet another signal of its successful response to the COVID-19 pandemic.

But when deputy education minister Lio Mon-chi told reporters on Aug. 4 that Chinese students would be allowed to enter Taiwan, he was whisked away from the podium by advisers only to return with a clarification: The reopening would not apply to most Chinese students, he said, due to "cross-strait related considerations."

The abrupt decision, which bars Chinese students from entering Taiwan apart from those graduating in the current academic year, has left around 5,000 Chinese students in limbo. It has also infuriated academics and student leaders, who feel a rare cross-strait success story has been ended by a policy they call "discriminatory."

"Students have a right to study," said Huang Ling-hsuan, a student at National Taiwan University and co-founder of the advocacy group Taiwan Student Rights Front. "No countries should put restrictions on it, especially Taiwan, which emphasizes democracy, freedom and human rights."

Taiwan's Mainland Affairs Council, which oversees relations with China and its territories, has accused the Chinese government of blocking students from returning after Beijing said in April it would not allow new students to study in Taiwan, but would allow existing students to return and finish their degrees.

But the council has not removed the entry ban against non-graduating Chinese students, leaving them unable to return to Taiwan even without Chinese government intervention.

On Aug. 5, the council blamed that decision on political hurdles imposed by Beijing, such as a requirement that the word "national" be removed from Taiwanese student IDs given to Chinese students.

Government agencies had for months released various statements on Taiwan's plans to welcome back Chinese students. Kuo Li-hsin, dean of the college of communication at National Chengchi University, said this "continuously postponed and swaying policy" has left Chinese students "disappointed and angry."

The council said in an email to the Nikkei Asian Review its policy stance has not changed since it said in July that it eventually planned to allow all international students -- including Chinese nationals -- to return for the fall semester, but is limiting the entry of all students due to health reasons.

The education ministry, which said last week it is discussing a reconsideration of the ban, declined to comment.

To student leaders and academics, the government has vacillated between ascribing the entry ban to politics and to the pandemic. Several universities, including NTU, have argued that they have sufficient facilities for all returning international students to self-quarantine for 14 days.

"If it's for health reasons, I think they [wouldn't] only remove the Chinese students," said Ho Yuan-kai, another co-founder of Taiwan Student Rights Front and a graduate student at NCCU.

"For them, it's really tragic," said Lala Lau of the Taiwan International Student Movement, which has organized protests opposing the entry ban. "They feel they are caught in between and have become a bargaining chip for the two governments, instead of being treated as human beings."

Many international students already missed the spring semester due to travel bans. One Chinese student at NTU, who asked to remain anonymous, said she had already delayed work on her thesis by several months, throwing her career plans into turmoil.

"I was really angry," she said, adding that some classmates had already dropped out or sought transfers to universities in other countries. "Everyone can see Taiwan is treating Chinese students differently." 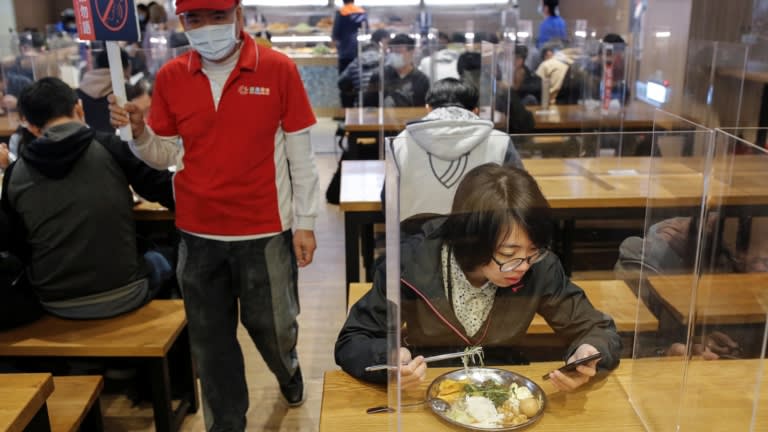 Students eat lunch between dividers to protect them from the coronavirus in the canteen of the National Taiwan University of Science and Technology in Taipei in April.   © Reuters

Students who are not graduating soon are now left with no idea when -- or if -- they will be allowed to reenter Taiwan.

"Their career plans are basically stopped," Lau said. "You wait every day at home, having no idea when things are going to change."

China began allowing students to pursue university degrees in Taiwan in 2011, part of a period of warmer Taiwan-China ties during the presidency of Beijing-friendly Ma Ying-jeou.

The program has given thousands of Chinese students an unprecedented view of Taiwan's democracy. Cai Boyi, a Chinese student at Taipei's National Tamkang University, even became a major figure in Taiwan's 2014 Sunflower Student Movement, which opposed a cross-strait trade deal due to fears it would erode Taiwan's sovereignty.

But the program has also stoked controversy, especially among those angered by Beijing's efforts to politically influence Taiwan.

Taiwan responded by saying it would deport students who destroy Lennon Walls, and President Tsai Ing-wen said on Facebook the country "would never allow such actions or tolerate them."

Beijing last year banned mainland Chinese tourists from visiting Taiwan before its April decision to bar new students from pursuing degrees in the country. Both moves were seen as direct strikes at the policies of Tsai, who has rejected Beijing's efforts to influence Taiwan's politics and has said Taiwan is "an independent country."

For Taiwan's vast network of private universities, many of which rely heavily on tuition from Chinese students, the entry ban has created "considerable financial problems, if not a crisis," said NCCU dean Kuo.

Taiwan's academic environment could lose "competitive force from Chinese students" along with "mutual understanding" between Taiwan and China, Kuo said, factors he said amount to "a significant and useful strength for cross-strait security and peace."

The entry ban, however, has left students "feeling extremely bitter and hurt by this place called Taiwan, which they once appreciated and loved so much," he said.

Students who went home during the winter with plans to return in the spring, Lau said, left behind their lives: apartments, pets, belongings, friends and partners. "Their lives are based in Taiwan," she said.

And as Taiwan seeks space on the international stage as a sovereign country independent from Chinese Communist Party rule, Lau believes its response to affected Chinese students could define how Taiwanese society views people living across the Taiwan Strait.

"We're asking ourselves, how should we recognize [Chinese] students in Taiwan under these cross-strait politics, whether they are enemies or whether they are friends," she said. "This is a political debate now."