Taiwan's Tsai doubles down on US ties to boost reelection bid

With eye on January poll, president lands in New York TAIPEI/NEW YORK -- Taiwanese President Tsai Ing-wen embarked on a Caribbean tour Thursday, first stopping over in New York, as she leans into the island's relationship with the U.S. in hopes of bolstering her reelection bid.

"Our hard-won democracy is now facing threats from and infiltration by external forces," Tsai said before boarding the plane for her 12-day trip to visit four Caribbean countries. "We will engage in mutual cooperation with like-minded countries to ensure the stability of democratic systems."

Anti-Beijing sentiment has grown in Taiwan as the self-ruled island's residents worry they could face increased pressure from the mainland similar to recent events in Hong Kong. Tsai hopes to set herself apart from the mainland-leaning opposition, but it is unclear how successful her strategy will be especially with the U.S. dealing with its own grievances with China.

Five countries have cut diplomatic ties with Taiwan since Tsai took office in 2016. She intends to bolster ties with its remaining friends with the trip, but some observers say her true target is the U.S.

Tsai landed in New York on Thursday afternoon en route to the Caribbean.

While in New York, Tsai attended a reception. Although reporters were not permitted in, the president spoke after the event. When asked the lessons she learned from the recent protests in Hong Kong, she said: "What the people of Hong Kong took to the street to express was their hopes for freedom and democracy. The Hong Kong government must respond to these hopes and their appeal to ensure the stability of its society."

She also expressed gratitude to the U.S. for arms sales to Taiwan.

Before Tsai's arrival, a few dozen Taiwan supporters had turned up in the rain at the 42nd Street entrance of the Grand Hyatt Hotel, where she is staying, waving "Taiwan Independence" and "Defend Taiwan's Democracy" signs and shouting "Down with the Communist Party!"

Many of these supporters have mainland Chinese roots. Among them was Cai Guihua, who participated in the 1989 pro-democracy demonstrations in Shanghai and was at one point imprisoned before emigrating to the U.S. in 2000. Supporters of Taiwan's President Tsai Ing-wen await her arrival at a New York hotel on July 11. (Photo by Alex Fang)

"We, as mainland dissidents, have to go all out and give strong support for President Tsai Ing-wen, so that Taiwan does not become another Hong Kong," Cai said.

Li Yifan, a new college graduate originally from mainland China, took a trip from out of state to New York show his support for Tsai and Taiwan.

But the pro-Taiwan protesters were outnumbered by at least a hundred pro-China protesters, who were ushered by police to the other side of the street across from the hotel, where they chanted "Begone, Tsai Ing-wen!" from under their umbrellas or in disposable ponchos.

A pro-China protest banner warned Tsai that "the pursuit of independence will only lead to war."

Tsai later arrived at the hotel in a black sport utility vehicle on the mezzanine level, above the commotion of the protests, where she was greeted by a delegation from local Taiwanese associations.

Delegation members peppered Tsai with comments like "Thank you, president" and "The people of Taiwan have to unite." 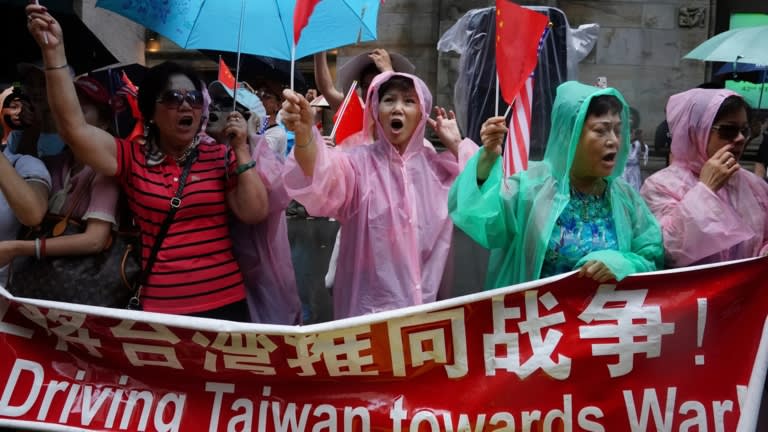 Pro-China protesters stand outside the Grand Hyatt Hotel in New York, warning that efforts to push for Taiwan independence will only lead to war.   © Reuters

Tsai will stop in Denver on the way home. Taiwanese media report that she could meet with Republican Sen. Cory Gardner in Denver.

This is not the first time Tsai has used a stopover to meet with American officials. She met with Republican Senator Marco Rubio in Miami in 2016, and with Maj. Gen. Arthur Logan in Hawaii this March.

Despite agreeing to a truce on trade with China last month, the administration of U.S. President Donald Trump announced Monday that it plans to sell $2.2 billion of arms to Taiwan. Tsai hopes to highlight to Taiwan's relationship with the U.S. as Washington ramps up security pressures on Beijing.

China has repeatedly expressed displeasure over both the arms sale and Tsai's stop in the U.S. "China always opposes official interactions between the U.S. and Taiwan," Foreign Ministry spokesperson Geng Shuang said on July 1, while the state-run Xinhua News Agency warned against outside influence on Taiwan, a "core interest" for the mainland, in a Thursday report.

Economic woes had weighed on Tsai's approval rating until the beginning of this year, when Chinese President Xi Jinping suggested the mainland's unification with Taiwan under the "one country, two systems" model -- like the one in place in Hong Kong and Macao.

The comment fueled fears for Taiwan's autonomy, which in turn boosted support for independence-leaning Tsai. Recent large-scale protests in Hong Kong, triggered by a controversial bill allowing extraditions to the mainland, have further turned the public against Beijing. Tsai is likely hoping to build even more momentum with overtures to the U.S. as she vies for reelection in January.

Tsai's approval rating rose to 47.7% in June, topping disapproval for the first time in 20 months, according to a survey by the Taiwanese Public Opinion Foundation.

Kuomintang, the Beijing-leaning opposition, is keeping a close eye on the situation. "We wouldn't have had a chance if the Hong Kong protests had happened right before the election," one party lawmaker said. "There's half a year before the vote, so anti-Beijing sentiment will probably settle by then."

Kaohsiung Mayor Han Kuo-yu and Foxconn founder Terry Gou are currently neck and neck in the race for the Kuomintang's nomination. The results of the party primary will be revealed as early as Monday.

Tsai's strategy is not without risk. The Kuomintang says the U.S. is just using Taiwan as a pawn to exert pressure on China -- an argument that would only gain credence if the U.S. later distances itself from Taiwan in hopes of resolving its trade war with Beijing.

The U.S. is weighing the sale of F-16 fighter jets to Taiwan. Whether this happens could shed light on Washington's stance on the island.

The Taiwan presidential race could have implications for the U.S.-China rivalry in East Asia, given the island's strategic location in relation to the mainland. A victory by the Kuomintang would give a boost to China. But the U.S. is hoping for Taiwan's cooperation on the "free and open Indo-Pacific" initiative, designed to counter China's Belt and Road, and likely does not want the island to lean closer to Beijing.