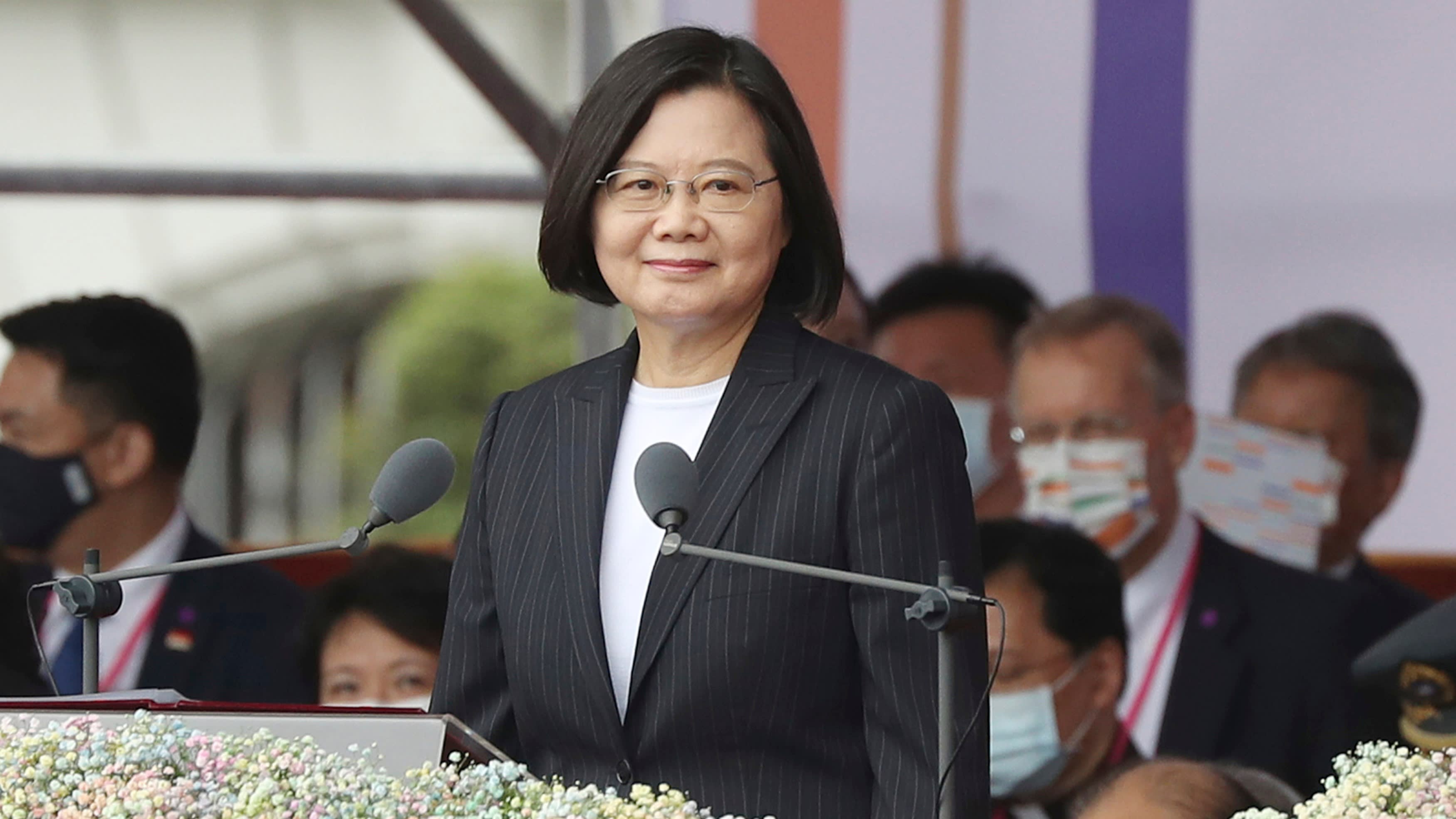 TAIPEI -- Taiwanese President Tsai Ing-wen painted Beijing as an aggressor in disputes from the South China Sea to the China-India border, while at the same time saying she was willing to hold cross-strait talks.

Being careful not to directly name China, Tsai said in a National Day speech on Saturday in front of the Presidential Office in Taipei that "for some time we have all been paying close attention to changes in regional security."

"From sovereignty disputes in the South and East China seas and the China-India border conflict, to developments in the Taiwan Strait, as well as the 'Hong Kong version of the National Security Law' that has garnered international concern, it is clear that democracy, peace and prosperity in the Indo-Pacific are currently facing serious challenges," she said.

Sean King, a scholar at the University of Notre Dame Liu Institute for Asia and Asian Affairs, said Tsai "clearly sees a regional role for Taiwan, putting its potential and plight in the context of other hot spots."

Tsai also used her speech to stress that the democratic-ruled island will continue to boost its defense capabilities as cross-strait tensions mount.

"At this stage, the most pressing cross-strait issue is to discuss how we can live in peace and coexist based on mutual respect, goodwill and understanding," said Tsai, who was reelected in a landslide victory in January,

"As long as the Beijing authorities are willing to resolve antagonisms and improve cross-strait relations, while parity and dignity are maintained, we are willing to work together to facilitate meaningful dialogue," Tsai said. "We are committed to upholding cross-strait stability, but this is not something Taiwan can shoulder alone; it is the joint responsibility of both sides."

The president said Taiwan will keep enhancing its defense and vigilance, stressing that "adequate preparation and reliance on the determination and strength of solid national defense capabilities is the only way to guarantee Taiwan's security and maintain regional peace."

She added, "We are aware that showing weakness and making concessions will not bring peace." National Day marks the 109th anniversary of the Wuchang uprising, which led to the overthrow of China's Qing dynasty and the 1911 formation of the Republic of China -- Taiwan's formal name.

China has always considered self-ruled Taiwan as a part of its territory and continues to say it can use force to take control of the democratically governed island. The last military engagement across the Taiwan Strait was in 1958, but China has been ratcheting up tensions over the past year or so.

One reason for this is that Washington and Beijing are increasingly locking their horns in a multifaceted battle for global supremacy. The conflict has been fought over trade, tech and national security. The U.S. hopes to draw democratic Taiwan, home to many globally important chipmakers, to join its battle against China's burgeoning tech empire.

People's Liberation Army aircraft have breached the median line between Taiwan and China nearly 50 times so far this year, the highest count since 1990, a sign that Beijing seeks to discard the de facto Taiwan Strait buffer zone.

"Over the last year, we have watched with concern as the Chinese Communist Party has broken its promises and utilized military coercion and intimidation to pressure and undermine the freedom and interests of peoples across the Indo-Pacific," said David Helvey, U.S. principal deputy assistant secretary of defense for Asian and Pacific security affairs, speaking Tuesday at the U.S.-Taiwan Business Council Defense Industry Conference.

He said the discussion of the "existential threat" Taiwan faces from China could not be more timely or important this year.

The U.S. has steadily increased contact with Taiwan, at the same time as Washington-Beijing ties have deteriorated under the watch of President Donald Trump.

U.S. Secretary of State Mike Pompeo told Nikkei Asia in an interview this week that the U.S. is committed to reducing cross-strait tensions. "We look to bring peace, not conflict," he said. But he insisted that "appeasement's not the answer."

"If one bends the knee each time the Chinese Communist Party takes action around the world, one will find themselves having to bend the knee with great frequency. So we have pushed back in a serious way with my diplomatic counterparts."

Since Tsai was first elected as Taiwanese president in 2016, the U.S. has approved more than $13 billion of arms sales to the self-ruled, democratic island. Taipei purchased MK-48 torpedoes in May and Patriot Advanced Capacity-3 (PAC-3) air defense missiles in July.

"As US ties are warming up with the Quad partners of Australia, India and Japan, the increasingly assertive China continues to send military aircrafts over the meridian line of the Taiwan Strait," Patrick Mendis, a visiting professor of global affairs at the National Chengchi University and a former American diplomat, told Nikkei Asia.

"It seems that China is still holding onto its history, repeating the revenge of the past," Mendis said, adding that Beijing needs to rethink its militaristic policies in dealing with issues such as Taiwan, the Indian border, the Senkaku Islands, and the Paracel archipelagoes in the South China Sea.

Taiwanese people, many of whose ancestors came from China, are increasingly dubious of Beijing.