TOKYO -- Washington's defense treaty with Tokyo applies to the Japan-administered Senkaku Islands, the new U.S. national security adviser confirmed Thursday, in an early show of support for an ally regarding a source of regional tension.

In a 30-minute phone call that marked the first official contact between high-level officials from the two countries since U.S. President Joe Biden took office Wednesday, Jake Sullivan and Japanese counterpart Shigeru Kitamura reaffirmed the importance of the alliance.

Sullivan said the U.S. opposes any unilateral actions intended to harm Japan's administration of the Senkakus -- which are claimed by China as the Diaoyu -- and is committed to its obligations under the treaty, according to the Japanese government's readout. The call was requested by Tokyo.

Both sides said they will work together toward a "free and open Indo-Pacific," and to cooperate closely with like-minded countries through such avenues as the Quad security grouping with Australia and India.

The officials agreed to collaborate on tackling global challenges such as economic security and the coronavirus pandemic. They exchanged views on the regional situation, including China and North Korea, as well as past abductions of Japanese nationals by Pyongyang, a long-standing issue for Tokyo. The U.S. first confirmed that the security treaty applies to the Senkakus in 2014, during a visit here by then-President Barack Obama. This was reaffirmed by his successor Donald Trump in a February 2017 summit with then-Prime Minister Shinzo Abe.

The call is part of a push by Tokyo to ensure the Biden administration is on the same page on key issues for the alliance.

Article 5 of the Japan-U.S. Security Treaty stipulates that: "Each Party recognizes that an armed attack against either party in the territories under the administration of Japan would be dangerous to its own peace and safety and declares that it would act to meet the common danger in accordance with its constitutional provisions and processes."

That is widely interpreted to mean that the U.S. side would treat any attack on the Senkakus equivalent to an attack on American soil.

Some in Tokyo expect little change in America's hawkish stance toward China. The hope is that the Biden administration will continue supporting the free and open Indo-Pacific concept that Tokyo and Washington have advocated over the past few years.

In a possible signal of the new administration's approach, Kurt Campbell, who was named to the newly established post of coordinator for Indo-Pacific affairs on the National Security Council, discussed the possibility of expanding the Quad for military deterrence  in an article for the magazine Foreign Affairs.

Campbell underscored the need for "serious U.S. reengagement: an end to shaking down allies, skipping regional summits, avoiding economic engagement, and shunning transnational cooperation. This new posture will give the United States a greater regional role and empower Indo-Pacific states in the face of China's growing clout." 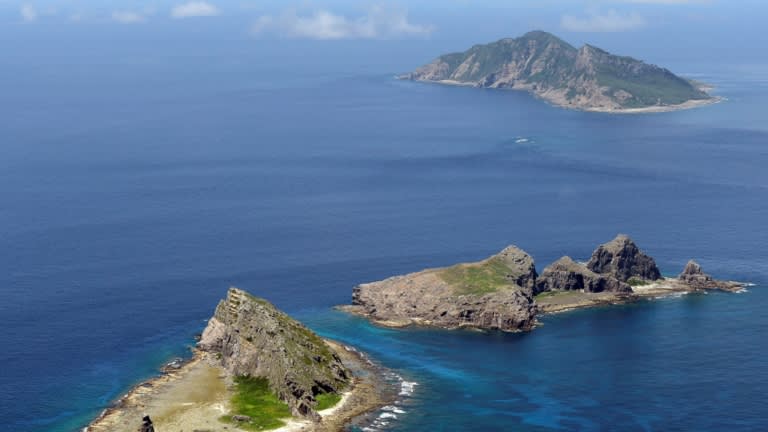 The Senkaku Islands have been a source of tension between Japan and China, which claims the Tokyo-administered islands as the Diaoyu.   © Reuters

Another focal point is climate change, which the new administration is positioning as a much higher priority. Tokyo is calling for top-level and cabinet-level talks with Washington about teaming up in this area.

In a congratulatory statement to Biden, Prime Minister Yoshihide Suga included climate change on the list of issues on which he hopes to work together with the new president. Both leaders aim to achieve net zero greenhouse gas emissions in their respective countries by 2050.

The U.S. side could send former Secretary of State John Kerry, who has been named to the new post of special presidential envoy for climate.

In an interview with Nikkei, Koizumi expressed interest in discussions with Kerry. "I would like to start with sharing that Japan's current climate change policy is totally different from what it was when Kerry served as secretary of state in the Obama administration," he said.

Former Michigan Gov. Jennifer Granholm, Biden's nominee for energy secretary, and Michael Regan, who has been tapped to lead the Environmental Protection Agency, may participate as well.

After Biden signed an executive order to have the U.S. rejoin the Paris climate accord, Japanese Foreign Minister Toshimitsu Motegi issued a statement Thursday welcoming the move.

"In cooperation with the United States, including in the field of advanced technology, Japan will continue to lead the international community in order to realize a decarbonized society that the Paris Agreement aims for," he said.