KARACHI -- The Financial Action Task Force (FATF), an inter-governmental, anti-money laundering watchdog, is keeping Pakistan on its grey list, and experts say this is a major encumbrance on the country's struggling economy.

FATF announced last week that Pakistan would retain its grey status until June when it will be reviewed at an extraordinary plenary session.

The grey list is made up of countries that are subject to close monitoring but cooperating with FATF to address systemic deficiencies so that money laundering, terrorism funding and proliferation financing can be countered.

Pakistan is reported to have largely complied with 24 of 27 action points recommended by FATF, including clamping down on illegal money transfer services.

The country was first placed on the list in 2008, but removed the following year. It went back on in 2012, and was removed in 2015 when anti-money laundering legislation was passed. Because of allegations of terrorism funding, Pakistan was grey listed for the third time in 2018, and remains there.

FATF President Marcus Pleyer told reporters last week that Pakistan is still being closely monitored. "While Islamabad had made significant progress, there remained some serious deficiencies in mechanisms to plug terrorism financing," he said. 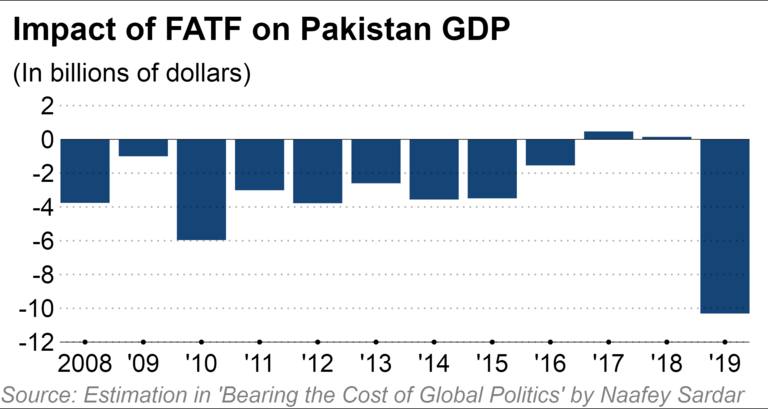 Hammad Azhar, Pakistan's industry minister and chair of the FATF Coordination Committee, told local media that the grey listing is approaching an end. "A lot of work has been done on the three points in which we are partially compliant," he said. "We are close to being largely compliant in these areas."

The three outstanding issues include "effective implementation of targeted financial sanctions against all designated terrorists."

A research paper titled 'Bearing the cost of global politics -- the impact of FATF grey-listing on Pakistan's economy' estimates a national economic loss of $38 billion since 2008 due to FATF. The report was authored by Naafey Sardar and published in February by Tabadlab, an Islamabad think tank.

Pakistan's economy was severely affected by the grey listing in 2018 when the South Asian country sustained an economic loss of $10.16 billion, Sardar told Nikkei Asia. The economist, who works as a senior research associate at Texas A&M University, said the report only goes up to 2019: "It was not possible to calculate the GDP losses for 2020 since the World Bank has yet to release data on the macroeconomic variables used for our estimations."

Experts believe that it is self evident that the FATF grey listing has impeded Pakistan's economic recovery and growth.

Sardar said his research established a causal relationship between FATF intervention and Pakistan's poor economic performance. "Pakistan's removal from the grey list has at times led to the revival of the economy, as was evident in an increase in GDP for the years 2017 and 2018," he said.

Prior to the latest FATF plenary session, there were fears Pakistan might be t blacklisted for failing to comply with all recommendations for over two years.

A government official, who requested anonymity, told Nikkei that blacklisting was possible given the lobbying by India -- Pakistan's arch-rival -- and the hardline stance adopted by France against Pakistan. The official credited the avoidance of FATF blacklisting as a win for Pakistani diplomacy.

"Blacklisting would have been catastrophic for Pakistan's economic recovery, but that threat is over," Hasaan Khawar, an Islamabad public policy analyst, told Nikkei. He said the FATF action plan remains high on the International Monetary Fund agenda, but Pakistan's evident progress means IMF programs are unlikely to be affected. Islamabad is currently renegotiating with the IMF for the return of an extended fund facility that was suspended in 2020 due to the COVID-19 pandemic. 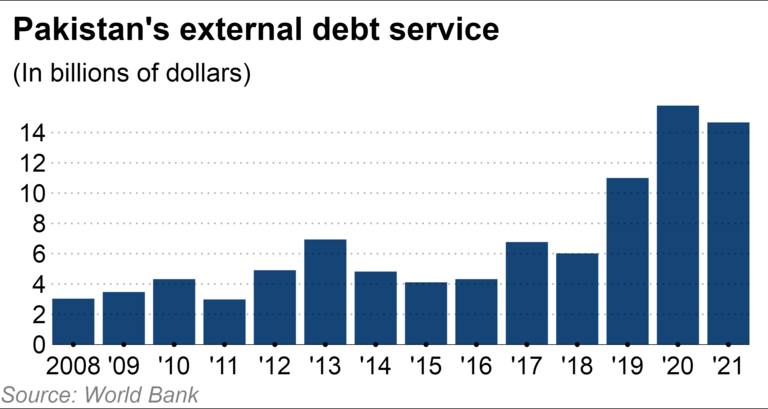 One line of thinking in Islamabad is that FATF listings are designed to pressure Pakistan into aiding the U.S.-led coalition in the Afghan peace process. They argue that makes FATF's involvement more political than technical in nature, which makes removal from the grey list harder to achieve no matter the other compliance successes.

Khawar sees FATF as a mixture of both political and technical issues. He said Pakistan still has serious deficiencies in its anti-money laundering regime -- a clearcut technical issue. "The fact that the world is not ready to accept those deficiencies anymore is a political issue at the global level," he told Nikkei.

He said now that Pakistan has addressed successfully 24 agenda points, the remaining three must be satisfied to demonstrate Pakistan's commitment to curbing terrorism funding. "Pakistan needs both domestic political will and technical work to get off the grey list," he said.