A white rhino is strapped down for dehorning near Klerksdorp, South Africa. (Photo by Laurine Croes)

BRISTOL, U.K. -- Despite dwindling populations of wild tigers in the world, Chinese traders are managing big businesses in tiger farms. This is set to grow after Beijing made a controversial announcement late last month permitting the sale of farmed rhino horns and tiger bones for the development and practice of traditional Chinese medicine for the first time in 25 years, shocking nations worldwide.

Thousands of tigers are kept and raised in often cruel conditions to supply bone and other body parts for the traditional Chinese medicine industry. Across the world in South Africa, rhino farmers are lobbying governments and environmental organizations to make legal the international sale of rhino parts to satisfy Asian demand.

Many Chinese believe that the protein and calcium in tiger bones have anti-inflammatory effects and that the keratin in rhino horn can cure anything from cancer to a hangover. Some believe that tiger penises are aphrodisiacs and practitioners of traditional Chinese medicine claim that even tiger teeth, skin and eyelashes have their use in treating ailments or improving health.

Such claims have consistently been rejected by the scientific community but these beliefs are deeply rooted in Chinese culture. By making the sale of these animal parts legal, Beijing is implicitly backing the traditional Chinese medicine industry and stimulating demand as a result.

This is a great cause for concern for these species. "The worst-case scenario is that the tigers in the wild disappear," said Gabriel Fava of the Born Free foundation, a leading charity working against animal exploitation.

The demand for these products far outweighs supply within China, which is not a native habitat for rhinos and where as few as 50 tigers remain in the wild. The pressure on the last remaining wild tiger population is "too great a gamble for China to take," said WWF Wildlife Practice Leader Margaret Kinnaird.

Since late August, rhino horn has been on sale legally in South Africa, after a court lifted a domestic trade ban in April. Many expect much of the horn to find its way to East Asia, even though South Africa remains committed to a worldwide ban on international trading.

Illegal trafficking of animal parts into China is common. A tiger bone can fetch as much as $2,000, while a rhino horn can cost up to $60,000 per kilogram. 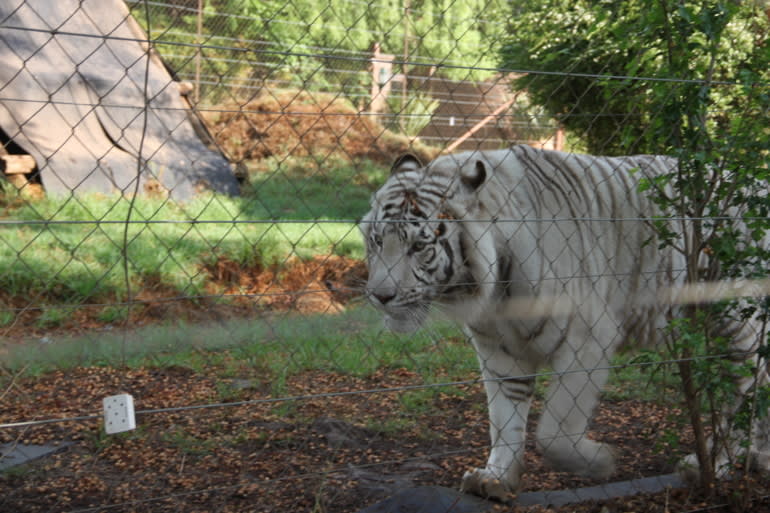 A white tiger in an enclosure in Johannesburg, South Africa (Photo by Laurine Croes)

Tigers could now suffer the same fate as the pangolin. Even though China allows sourcing within the country of roughly 25 tonnes of pangolin parts annually, equivalent to over 25,000 animals, demand far exceeds this. Today, the pangolin is the world's most trafficked animal.

Although a ban on the use of rhino horn and tiger bone from wild animals has been in place in China since 1993, the use of these products from captive sources has seen a slow and steady growth in its shadows.

She pointed to an EIA investigation in 2012 that showed that the government allowed the pilot use of bred tiger bone for medicinal purposes from 2005. The EIA warned such a move would "encourage the growth of the captive-breeding of tigers to supply a quietly expanding legal domestic trade."

China has a questionable reputation when it comes to conservation policies, but its recent decision was still unexpected, especially after it banned the domestic sale of ivory at the start of the year. Banks said the announcement "runs completely counter to the commitments under the London Conference on Illegal Wildlife Trade [held in October] to eradicate markets, and to China's commitments under the Convention on International Trade in Endangered Species."

In South Africa, where the trade ban in rhino horn was lifted, a lack of local demand has resulted in a collapse of private businesses. As international trade remains illegal, stockpiles of legal horns stay unsold in safe houses as poaching for the Asian black market continues.

The EIA estimates that 7,000 tigers are kept in captivity across China, Southeast Asia and South Africa, almost double the number of wild tigers worldwide.