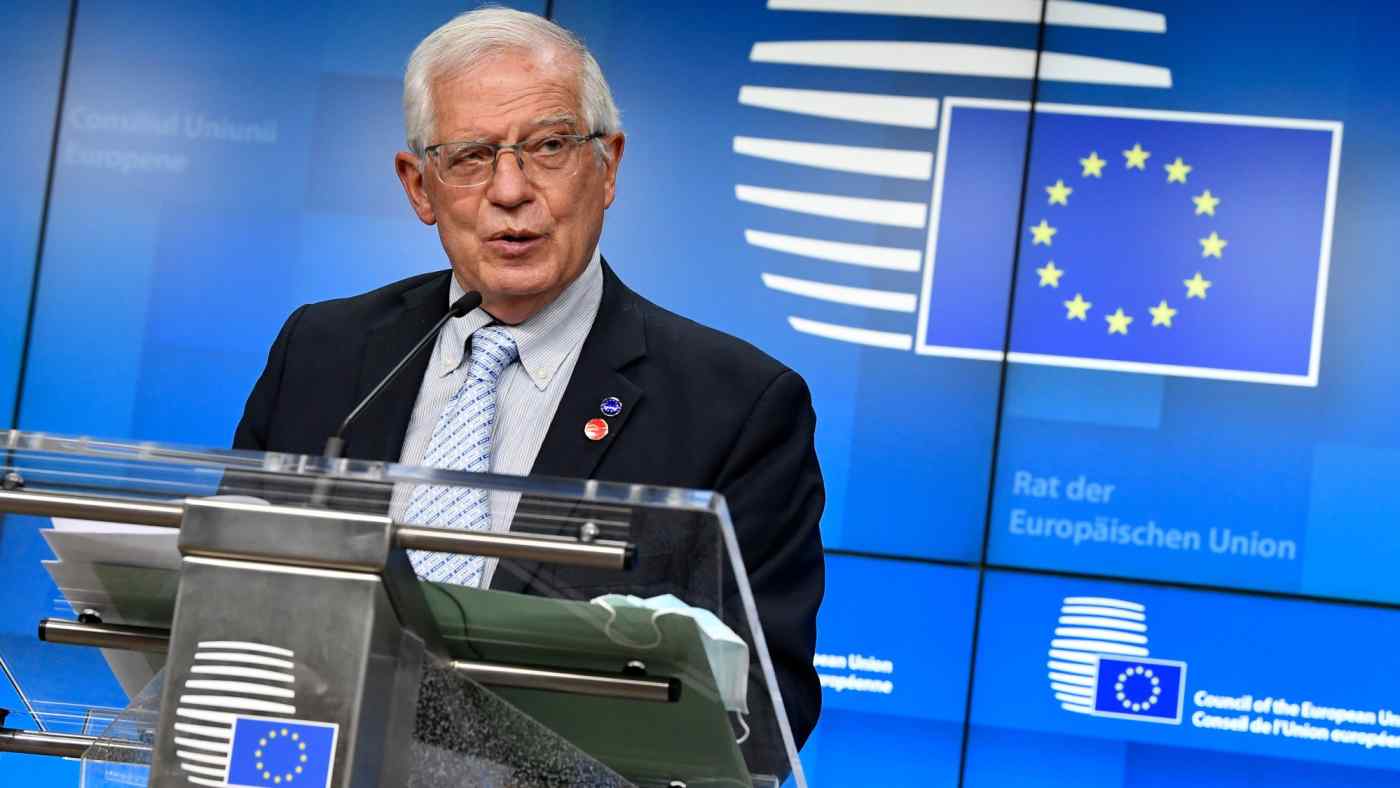 BRUSSELS -- The European Union declared a more expansive approach toward the Indo-Pacific with its strategy upgrade unveiled in April, pursuing stronger economic and security ties with "like-minded" partners such as Japan and India while China's influence in the region grows.

Josep Borrell, the EU's high representative for foreign affairs and security policy, told Nikkei in a recent interview that the bloc will be "standing firm" with China on principles such as human rights without forming any "alliance" against Beijing.

Here are edited excerpts of the interview:

Q: What does the European Union aim to achieve with its new Indo-Pacific strategy? How will this strategy influence the EU's engagement in the region from an economic perspective as well as a security and diplomatic perspective?

A: The Strategy for Cooperation in the Indo-Pacific is a strong political signal of the EU's renewed and significantly upgraded commitment to the region. At a time when intensifying geopolitical rivalry is creating greater unpredictability, the EU wants to contribute to the stability and prosperity of the region in a more comprehensive and effective way.

We have been engaged in the region for a long time, as the top investor and development assistance provider as well as one of the biggest trading partners. Our strategy covers many policy areas, from trade and investment to fighting climate change, health and technological cooperation between like-minded partners.

On the security side, EU member states have acknowledged for the first time the importance of a meaningful naval presence in the Indo-Pacific. We will also step up our cooperation against cyberthreats, and we will organize more joint naval exercises and port calls with our Asian partners.

Q: The European Council concludes that partnerships with like-minded countries are critical. How do you expect to cooperate with those countries, especially Japan, in the Indo-Pacific context?

A: Let me give you a concrete example: We will hold our virtual EU-India summit May 8 and will announce a connectivity partnership. It is the second since the Partnership on Sustainable Connectivity and Quality Infrastructure signed with Japan in 2019.

We also recognize the security implications of connectivity -- including digital, transport and dual use infrastructure -- and this is why we wish to work with like-minded partners such as Japan, India and [the Association of Southeast Asian Nations and the U.S.]. This is a signal of our strategic intent.

Q: Japanese Foreign Minister Toshimitsu Motegi attended the EU Foreign Affairs Council's virtual meeting in January. In which fields would you like to reinforce cooperation with Japan?

A: The EU and Japan can help lead a strong and sustainable recovery from the COVID-19 pandemic that benefits everyone, by supporting the efforts and reform of the World Health Organization, by promoting fair and open trade within a revitalized World Trade Organization and by using the opportunities offered by the green and digital transitions.

Joint ambitious action on climate change under the Paris Agreement and encouraging global standards and regulatory approaches for digital technologies and data flows are part of the picture. These are just a few ways in which the EU and Japan can help strengthen the rules-based international order and contribute to global and regional stability, security and prosperity.

Q: The EU-China investment pact reached in December drew criticism from some member states and civil groups. Has the EU changed plans on proceeding with the ratification process?

A: The [Comprehensive Agreement on Investment] looks to rebalance our economic relationship on the basis of jointly agreed rules. It is part of the EU toolbox to address long-standing issues -- much demanded by EU businesses -- related to market access, a level playing field and sustainable development.

While that CAI does commit China to make continued and sustained efforts to ratify the [International Labor Organization's] fundamental conventions on forced labor, it is not a human rights agreement. That said, economic interests will not prevent us from continuing to stand up for universal and EU values and principles, as we do in every conversation with our Chinese counterparts, and -- when the situation merits it -- through imposing sanctions.

Prospects for ratification of the CAI will clearly depend on how EU-China relations evolve. Ratification will not take place in a political vacuum, but our view is that for the purposes that it was designed, it is a good deal for Europe.

Q: Western camps see many problems to be solved in the areas of democracy, human and labor rights as well as respect for international law. How do you put pressure on China to deal with these issues?

A: It is no secret that the EU and China are systemic rivals when it comes to governance, adherence to international law and human rights commitments. Over the past years, the EU has redefined its strategy with China, focusing on our interests, which include standing firm on our values.

We will continue to push back with Chinese counterparts in cases of fundamental disagreement and take restrictive measures when necessary. We will continue expressing our positions publicly, including in multilateral forums, and coordinate actions with like-minded partners.

Q: The EU stance toward China seems to mix pursuing economic benefits while saying tough things. Is it possible to do both at the same time?

A: I would not agree that we only "say tough things." The EU acts through all of its available means to pursue its interests. This includes imposing restrictions on those responsible for human rights abuses, strengthening our response to cyberattacks, imposing stricter controls on dual use technologies and ensuring due diligence in supply chains.

The economic relationship with China is one of our most important. Bilateral trade amounts to 1.5 billion euros ($1.8 billion) per day.

But there is much more to our relationship with China than purely economic ties: How can we effectively tackle climate change without having China play its part? Look at the coronavirus pandemic and global health more broadly, or foreign policy priorities like the Iran nuclear deal or Myanmar. Our relationship is complex, which is why we approach it in a realistic way, always pursuing EU interests and defending our values.

Q: President Joe Biden's administration takes a hard stance on China. Is there room for the EU to cooperate with the U.S. regarding fundamental values, security or technological confrontation?

A: The return of the U.S. to global leadership and reengagement with like-minded partners including the EU opens prospects for stronger trans-Atlantic cooperation, also to address common challenges raised by China. Earlier this year, I relaunched the EU-US dialogue on China, which will enable us to coordinate our positions on issues such as reciprocity -- including economic issues -- resilience, human rights, security, multilateralism and areas for constructive engagement with China, such as climate change.

It's not about an "alliance" or "war" against China. It's about promoting and defending EU interests, including our values, together with others that share them.

Q: What are the goals of the EU-India summit on May 8, and why hold the meeting at this time?

A: Our converging interests and shared commitment to multilateralism and democracy have the potential to make our cooperation more meaningful. The EU-India summit in 2020 confirmed our strong mutual interest to develop ties further, so the EU-India leaders meeting on May 8 -- bringing together leaders of all EU member states and institutions and of India -- builds on the progress achieved since.

We aim for a comprehensive summit statement focusing on global health in the context of COVID-19, climate change and green growth ambitions, commitments on trade, connectivity and technology, and cooperation on foreign and security policy interests. We also hope to launch the EU-India connectivity partnership and a business roundtable in the margins of the leaders meeting to bolster business-to-business interaction.

Q: Could we see progress on the long-suspended free trade agreement negotiations and cooperation in infrastructure projects?

A: While the absence of an FTA has not stopped the intensification of EU-India trade, which represented 65 billion euros in 2020, there remains a great deal of untapped potential. The EU is fully committed to working toward balanced, ambitious and mutually beneficial trade and investment agreements, and we will certainly discuss this at the leaders meeting.