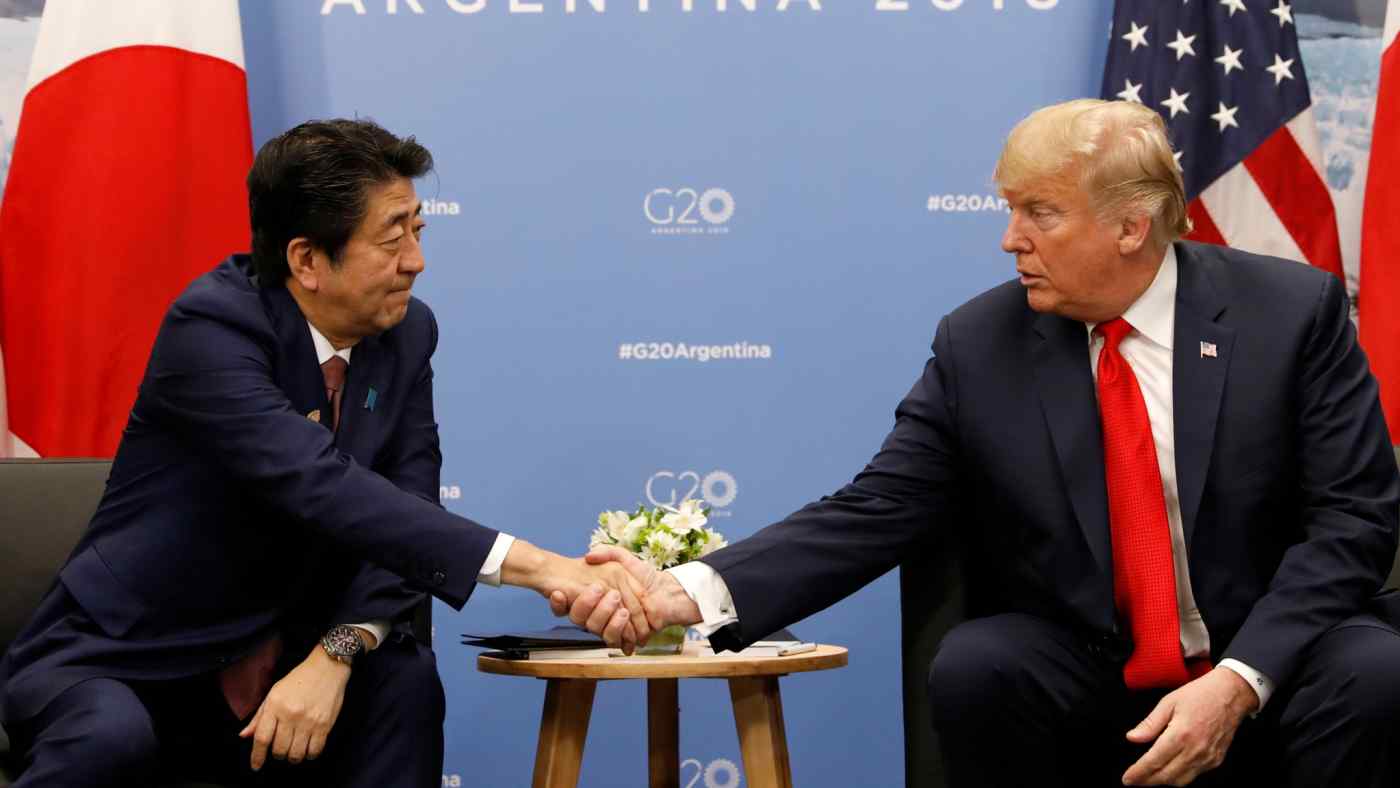 "It's a massive deficit between ... Japan and the United States, and it's coming down," Trump told reporters ahead of their meeting. "[T]hey are really working with me on trying to balance our deficit, because we do have a deficit that is pretty substantial with Japan. We hope that we're going to be balancing it very quickly."

"Japan is buying large amounts of our fighter jets, our F-35s and others, and we appreciate it very much," said Trump.

Abe, at Trump's side, noted that, "the Japan-U.S. alliance has become more robust than ever."

"I want to exchange opinions on North Korea, trade and the economic relationship between Japan and the U.S.," he added.

The two leaders discussed coming trade talks and the global economy in light of tensions with China. Trump called for cooperation on security issues and North Korea.

This is the ninth meeting for Trump and Abe. At their last summit in New York in September, they agreed to negotiations for a trade agreement on goods, which could begin as early as January. They are expected to confirm imminent talks through Toshimitsu Motegi, Japanese minister of state for economic and fiscal policy, and U.S. Trade Representative Robert Lighthizer.

But concession on issues like opening up Japan's agricultural market will be difficult for Abe with upper house elections looming next summer. The prime minister hopes to placate Trump with more purchases of military equipment and cooperation on reducing their trade deficit instead. Japan is already considering buying up to 100 F-35s for more than 1 trillion yen ($8.8 billion).

Abe also warned Trump that intensifying trade tensions with China risks derailing the global economy and urged a solution through dialogue. They exchanged opinions on expanding trade and investment before starting negotiations as well.

The leaders reaffirmed their close cooperation on several issues. Abe called on Trump to strengthen the U.S.-Japan partnership on infrastructure projects in the Indo-Pacific region. They also committed to coordinating closely with each other and with South Korea on holding North Korea to its promise to give up its nuclear weapons.

The Japanese and American leaders also joined Indian Prime Minister Narendra Modi for a trilateral session, where they confirmed deeper cooperation on economic and security issues in the Indo-Pacific. This was the first summit between the leaders of these three democracies.

"Cooperation among our three countries, which share universal values and strategic interests, to realize a free and open Indo-Pacific will make this region prosperous and peaceful," Abe said at the meeting.