US president says 'very, very major' trade deal is in the works 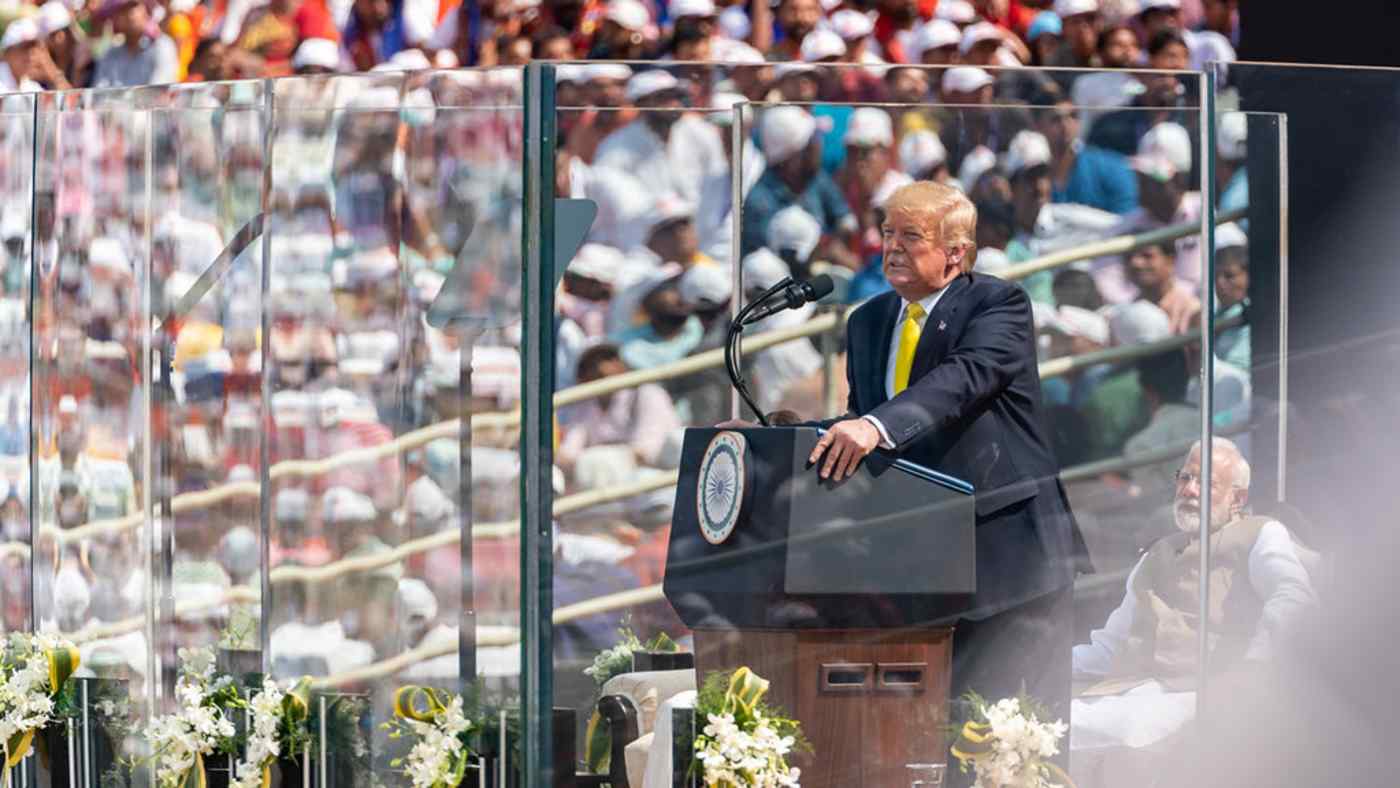 NEW DELHI/NEW YORK -- Even for crowd-loving U.S. President Donald Trump, drawing more than 100,000 people to an event is rare.

In his first trip to India since taking office, the president got a rush of this Monday as he stepped on a stage at the new Sardar Patel Stadium, the world's largest cricket stadium, alongside Indian Prime Minister Narendra Modi.

The enthusiastic crowd that Modi had promised had made it worthwhile to take a break from an intense election season back home. It came as Sen. Bernie Sanders emerges as the front-runner in the race for the Democratic Party's nomination, supported by an army of millennial backers.

Thousands showed up inside and outside the stadium, wearing white hats reading "Namaste Trump," the rally's title. Although Trump stumbled on many local words, rendering "chaiwala" (tea seller) as "cheewala" and mispronouncing the name of famed cricket player Sachin Tendulkar, the crowd still cheered.

The event took place in Ahmedabad, the largest city in Modi's home state of Gujarat. Trump will meet with Modi on Tuesday before departing for the U.S. that night.

Trump spent much of the 27-minute speech praising his hosts. "In just 70 years, India has become an economic giant, the largest democracy ever to exist and one of the most amazing nations anywhere in the world," he said.

Trump did not mention China, despite its being the biggest geopolitical reason why the two countries are drawing closer.

"There is all the difference in the world between a nation that seeks power through coercion, intimidation and aggression and a nation that rises by setting its people free and unleashing them to chase their dreams," Trump said. "And that is India."

Many of the rally attendees in Ahmedabad were mobilized by the prime minister, via channels including his Bharatiya Janata Party, in a bid to showcase the close U.S.-India relationship to both foreign and domestic audiences.

The rally was Modi's "way to feed Trump's ego" and "keep him on their side," said Devesh Kapur, professor of South Asian studies and director of Asia programs at the Johns Hopkins University School of Advanced International Studies.

"After all the attention from the impeachment, now [Trump] wants to convey a signal of being very, very presidential," as U.S. foreign policy remains a presidential prerogative, Kapur said.

"The reception Trump got in Europe, which has been the traditional allies of the U.S., has been less than warm," he said. "He's been treated with protests and all sorts of things."

The president noted the "4 million Indian Americans living in the United States," giving a nod to an influential voting bloc ahead of the presidential election in November.

The "Namaste Trump" title echoed "Howdy, Modi," a rally attended by both leaders and drawing more than 50,000 people of Indian origin last September in Houston, Texas. The Trump campaign later claimed that Modi had endorsed him at the Houston event, but India's external affairs minister denied it.

But Kapur said the sway of the Trump's being cozy with Modi on Indian American voters would "overall will be fairly marginal."

The growing community of Indians accounted for more than 1% of the U.S. population as of 2015, Census Bureau data shows. Many lean Democratic, and in the 2016 general election 84% of Indian American voters supported Trump's rival Hillary Clinton, according to polling by the Asian American Legal Defense and Education Fund.

Indian Americans make up a small part of the population, "but certainly in terms of funding, fundraising and have their constituents support you, they play a role," said Anubhav Gupta, associate director with the Asia Society Policy Institute in New York.

The Indian community in the U.S. is one of the most educated and wealthy and has produced top leaders in both the public and private sectors.

The Trump administration's moves to cut down on legal immigration to the U.S. have made the president unpopular with an Indian diaspora there reliant on work visas.

Trump tried to soften this perception while justifying his government's tougher screening measures. The U.S. has "made clear that while our country will always welcome newcomers who share our values and love our people, our borders will always be closed to terrorists," he said.

He also declared that "since my inauguration, commerce between our two nations has increased by more than 40%." Goods trade rose about 36% from 2016 to 2019, U.S. statistics show.

Although a previously hoped-for trade deal did not materialize before his trip, the American leader trumpeted a $3 billion arms deal and the start of negotiations toward "very, very major" trade agreements.

"We are in the early stages of discussion for an incredible trade agreement to reduce barriers of investment," he said.

Trump said he and Modi will "discuss our efforts to expand the economic ties between our two countries."

India had an average applied tariff rate of 17.1% in 2018, according to the World Trade Organization -- far above the European Union's 5.2% and Japan's 4.4%. The U.S. ended preferential trade treatment for India last year to pressure New Delhi to open up what a senior White House official called an unfairly closed market.

India has moved in the opposite direction this year, announcing higher tariffs this month on a range of goods including toys and smartphone components.

The $3 billion-plus arms deal, which includes such equipment as military helicopters, comes as Washington has strengthened its strategic relationship with New Delhi, which it sees as a keystone of its plans to contain Beijing. Trump touted the two countries' first-ever joint land, air and sea military exercises last year as "something to behold."

Trump has given Modi a free pass on the BJP's Hindu nationalist policies, including the Kashmir lockdown and a new citizenship law criticized for discriminating against Muslims.

"Trump doesn't ever want to talk about democracy," said Alyssa Ayres, senior fellow for India, Pakistan and South Asia at the Council on Foreign Relations.

"I don't think it crosses his mind to talk about issues that are at the heart of the quality, function and health of democracy," Ayres said. "Other parts of his administration are, thankfully, but he doesn't appear to be."

Just hours before Trump arrived in New Delhi, thousands demonstrating over the citizenship law clashed on the streets, leaving one police officer and two civilians dead and dozens injured, according to media reports.

Tear gas and smoke grenades were used by police to disperse the crowds less than 20 km from where Trump and Modi will meet Tuesday.