Abe's hopes for leading Trump back to the Trans-Pacific Partnership trade pact were quickly brushed off as the president made clear his preference for bilateral negotiations to secure U.S.-friendly deals in cars and beef.

Both leaders are apparently unable to make large-scale concessions ahead of key elections -- the midterm elections for Trump and Abe's bid to extend his leadership of Japan's ruling party. The two sides seem eager to seek quick fixes to the $70 billion trade deficit the U.S. has toward Japan through big arms sales.

The U.S. "supports Japan's efforts to improve its defense capabilities, and we're exploring ways to expedite the sale of American military equipment to Japan," Trump told a joint news conference with Abe on Wednesday. Abe had told Trump during their meeting that introducing high-performance equipment, including American materiel, was necessary to bolster Japan's capacity for defense.

Trump's primary goal with this sales push appears to be reducing the U.S. trade deficit with Japan, which is America's third-largest deficit with any trade partner, coming in behind those with China and Mexico. 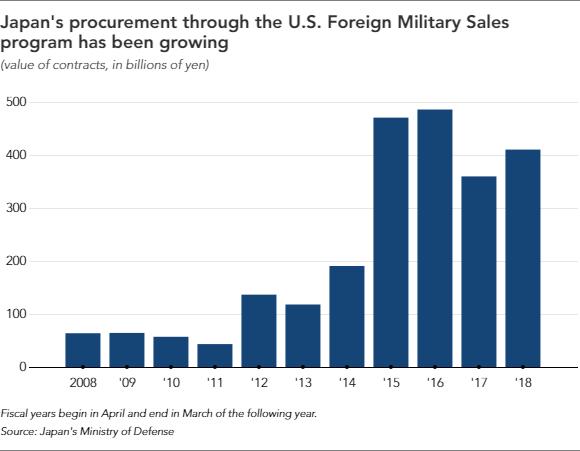 Japan has resisted Trump's urging that it increase imports of American autos and farm products. But both countries stand to benefit from more weapons sales, and military equipment is far pricier on a piece-by-piece basis than ordinary goods: One F-35A stealth fighter costs Japan around $140 million. The country already plans to purchase 42 of the advanced aircraft, and Trump seems to expect it will buy even more, helping bring trade into balance. Japan also plans to install two Aegis Ashore missile defense systems costing around $1 billion each.

In concrete terms, Trump aims to overhaul the Foreign Military Sales program the U.S. uses to sell sensitive or secret equipment to allies. At present, buyers such as Japan must pay for their equipment up front, and are given no clear timeline for delivery. Tokyo has previously called for improvements in the process.

"It would be, in some cases, years before orders would take place," Trump said, blaming "bureaucracy" in various government agencies for problems with the FMS scheme. In fact, a shortage of staff on the American side is partly responsible for delays in delivery, according to a Japanese government source. Each F-35A stealth fighter Japan buys from the U.S. is expected to cost around $140 million.   © Kyodo

On the trade front, Trump made clear his preference for bilateral negotiations over a multinational framework such as the TPP.

The launch of new trade talks between U.S. Trade Representative Robert Lighthizer and Toshimitsu Motegi, Japan's minister of state for economic and fiscal policy and TPP point man, was part of Tokyo's strategy to start bilateral talks with the Trump administration but ultimately bring Washington back into the TPP.

The game plan stumbled out of the gate as Trump made his stance clear at the press conference on Wednesday. "I don't want to go back into TPP. ... I like bilateral better," he said.

Lighthizer has said the agricultural sector will be his top goal as he negotiates better access for American products. On beef, for example, TPP nation Australia will see its tariffs fall to just 9% over time, while levies on American beef will stay at 38.5%. In bilateral negotiations, the U.S. may ask for lower tariffs than Australian beef.

For Japanese automobiles entering the U.S., Washington had initially agreed in TPP talks to scrap levies over the course of 25 years. Autos make up 30% of American imports from Japan and are a major source of the trade deficit. In bilateral talks, Washington could seek to extend the phaseout period to protect American automakers.

U.S. automakers could also pressure the Trump administration to ink an agreement with Japan to avoid measures that would weaken the yen, in fear of an influx of cheap Japanese vehicles. That, in turn, could handcuff the Bank of Japan's monetary policy, which currently centers on massive monetary easing.

"We will absolutely not enter negotiations over a free trade agreement," said a Japanese official who attended Abe and Trump's meeting. The Japanese leader, who must run for re-election as his party's chief this fall, told Trump on Wednesday that Japan cannot concede any more on agriculture than it has in the TPP.

Wendy Cutler, vice president of the Asia Society and a former TPP negotiator, said Trump's rebuff of multilateral free trade agreements in favor of bilateral deals has so far seen little success. "The other countries [of the TPP] just aren't interested," she told the Nikkei Asian Review. "The administration favoring bilateral deals yet having no partners to show for it, I think, should lead them to really reconsider their approach."

As Washington embarks on trade negotiations with a reluctant Tokyo, a Japan-European Union economic partnership agreement works its way toward ratification. Under the Japan-EU pact, Japanese cars will be able to enter the EU tariff-free in eight years, while American cars will retain their 10% levy.

Trump looks to make a show of strength ahead of the midterms in November. He rebuffed Abe's request on Wednesday that Japan be exempt from U.S. tariffs on steel and aluminum, and said he wants results in the next several weeks from the Motegi-Lighthizer talks. This rushed approach paid off in recent talks with South Korea, which agreed to cap steel exports to the U.S. at 70% of recent levels.