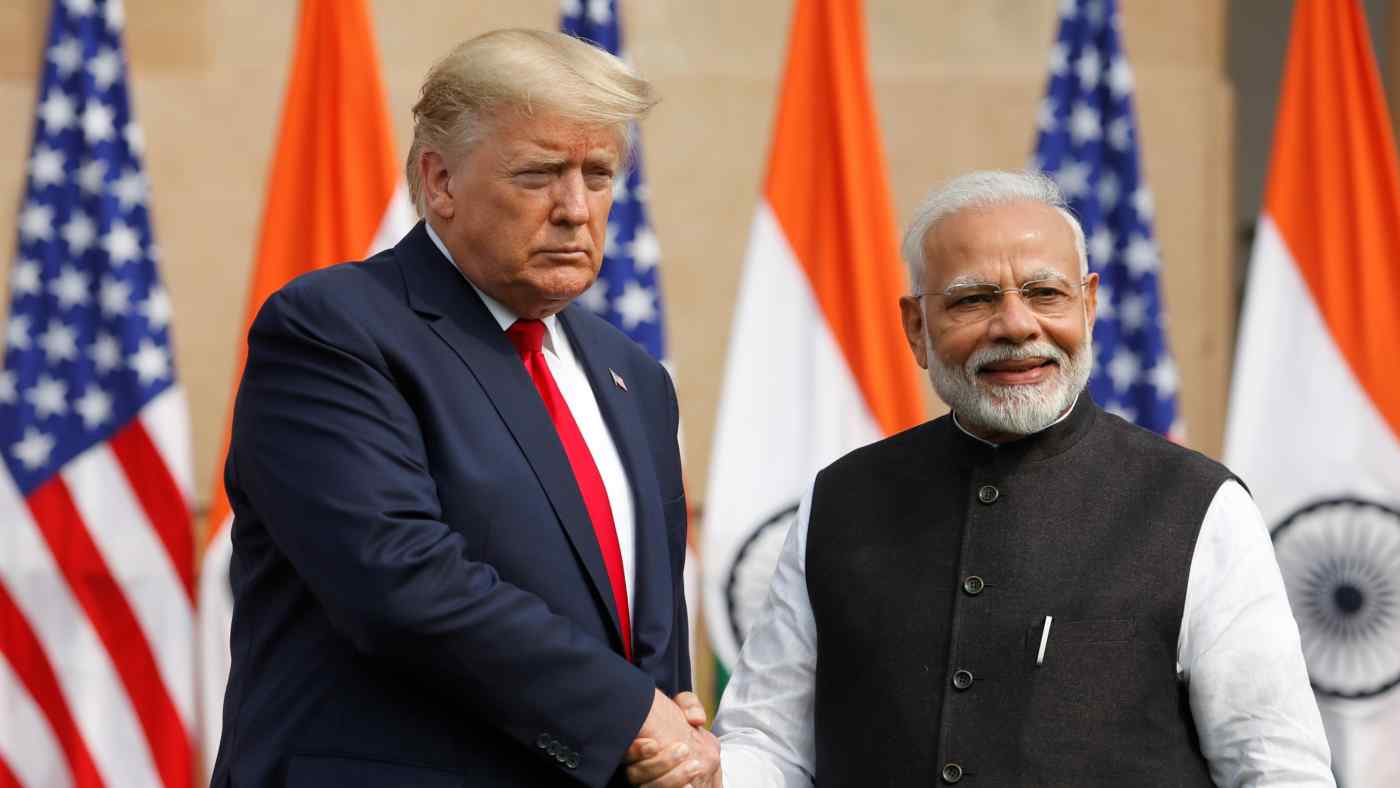 NEW DELHI -- India and the U.S. on Tuesday finalized huge defense deals under which New Delhi will buy advanced American military equipment, including Apache and MH60 Romeo helicopters, worth over $3 billion.

These items are "the finest in the world," U.S. President Donald Trump said in a joint statement with Indian Prime Minister Narendra Modi after talks at the end of his two-day visit. "These deals will enhance our joint defense capabilities as our militaries continue to train and operate side by side."

The purchases are expected to bolster India's defense capabilities against Pakistan and narrow the gap with China, the two neighbors with which New Delhi has had long-standing border disputes.

The deal came as both leaders hailed progress toward negotiating a trade agreement, a priority for Trump, who has in the past denounced India's tariffs on U.S. goods.

He said he discussed with Modi about the expansion of the so-called Quad cooperation to ensure a free and open Indo-Pacific, the "importance of a secure 5G wireless network," and an economic relationship that is "fair and reciprocal." A man rides his cycle past a hoarding with the images of Modi, Trump and first lady Melania Trump ahead of the U.S. president's visit to India on Feb. 22.   © Reuters

The Quad is the economic and security dialogue spanning Australia, India, Japan, and the U.S. that began in 2007 and was revived in 2017 after a 10-year hiatus.

"Together, the Prime Minister and I are revitalizing the Quad Initiative with the United States, India, Australia, and Japan," Trump said. "Since I took office, we have held the first Quad ministerial meeting ... and expanded cooperation on counterterrorism, cybersecurity, and maritime security to ensure a free and open Indo-Pacific."

Trump received a warm welcome on arrival on Monday in Ahmedabad in Modi's home state of Gujarat where he addressed a rally of more than 100,000 in the world's largest cricket stadium.

In Ahmedabad, Trump said the U.S. was looking forward to providing India with some of the best and most feared military equipment on the planet. "We make the greatest weapons ever made: airplanes, missiles, rockets, ships," he said.

"And we're dealing now with India," he said. On Tuesday, he said teams from both sides have made "tremendous progress on a comprehensive trade agreement" and that he was optimistic the two countries can reach a deal that will be of great importance.

At a news conference, Trump said if a trade deal happens with India it will be toward the end of the year.

"Previous administrations had no clue, they didn't know the problems," the president said. "We are being charged large amounts of tariffs."

To further strengthen bilateral economic ties, he added the U.S. International Development Finance Corp., a government-backed lender, will be setting up a permanent presence in India.

"We are at a point where our relationship is so special with India. It has never been so good than it is right now," Trump said.

Modi said after talks with Trump that they have "agreed to start negotiations on a big trade deal."

Trade tensions between India and the U.S. have been on the rise since Trump took office in 2017. Trump labeled India the "tariff king," in particularly for its treatment of Harley-Davidson motorcycles, which the president mentioned again Tuesday. New Delhi took umbrage at Trump's additional levies on Indian steel and aluminum imports.

But the visit appears to have helped changed the relationship. Modi said Tuesday that the India-U.S. relationship will be upgraded to a "comprehensive global strategic partnership," adding that ties between the two are "people-driven and people-centric."

"I don't want to discuss that," the president said in response to a question on the law. "I want to leave that to India, and hopefully they are going to make the right decision for the people. That's really up to India."

Trump, however, said he and Modi did talk about religious freedom, and that the prime minister told him India has worked "very hard" for that. He said he and Modi had not discussed Monday's violent protests in Delhi over the citizenship law.

Local media reports said the death toll in Monday's violence had climbed to at least 11.