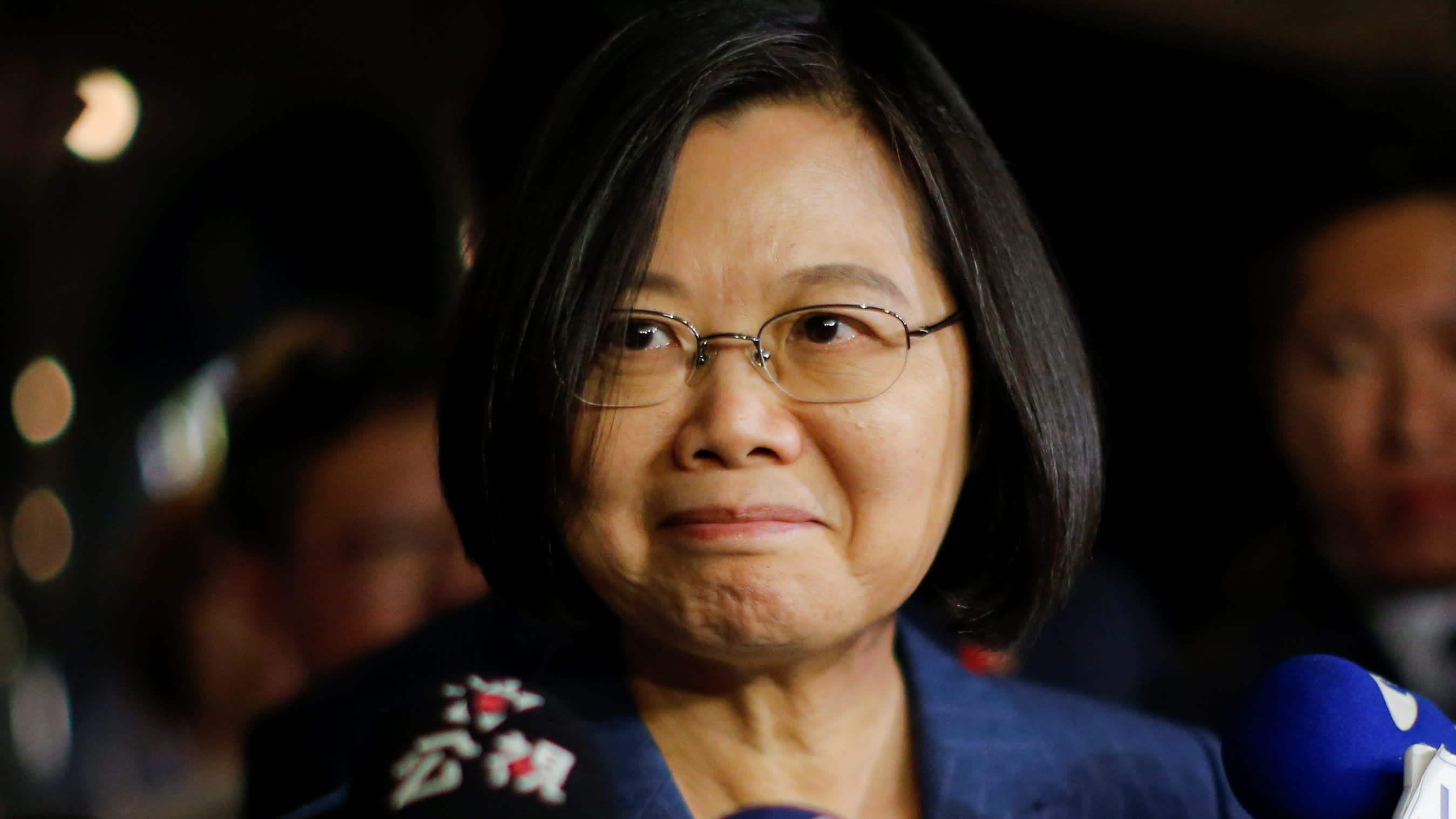 TAIPEI -- Taiwan President Tsai Ing-wen flew out of New York on Saturday, after her highest-profile "transit" in the U.S. since taking office in 2016.

She met members of the Taiwanese diaspora, and spoke at Columbia University -- a rare honor for a visiting Taiwanese president. In her speech, she framed the existential threat that China poses to Taiwan as the front line of the global struggle between authoritarianism and democracy.

"Taiwan's survival is about more than just cross-strait relations," Tsai said. "We are a vital bastion of democracy in the Indo-Pacific, and the entire world is closely watching the precedent we will set for the future of democracy."

For most of the past 20 years, American administrations from both parties have kept the U.S.-Taiwan relationship in the background of their Asia policy. Since Tsai's congratulatory phone call to President-elect Donald Trump in late 2016, however, the relationship between Washington and Taipei has steadily warmed -- and become much more open.

Tsai's stop in New York en route to visit Taiwan's diplomatic allies in the Caribbean was the culmination of years of slow but consistent developments -- including legislation, arms sales and diplomatic moves. All of this has arguably made U.S.-Taiwan ties tighter than at any point since Washington cut formal relations to recognize Beijing in 1979, or certainly in decades.

With both Tsai and Trump facing reelection next year, the warming trend is likely to continue for the foreseeable future. A growing number of Taiwan's strongest supporters in Congress -- such as Sen. Cory Gardner of Colorado, where Tsai will stop in Denver on her way home -- are pushing for her to visit Washington.

This could elicit a strong response from China's Communist Party, which claims Taiwan as its territory despite having never controlled it. 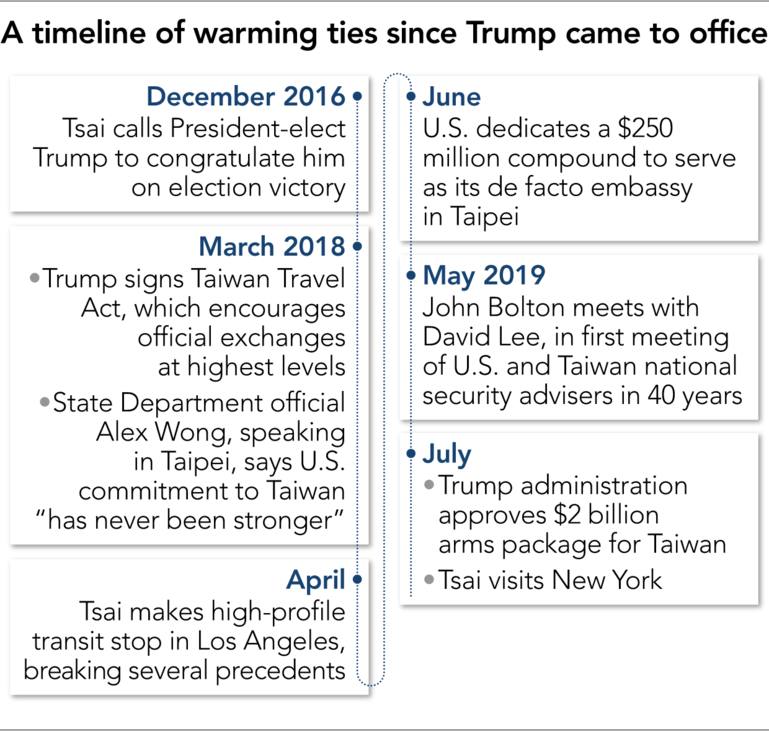 In some respects at least, the relationship still falls short of where it was in the mid-1990s, according to Kharis Templeman, an adviser to the Taiwan Democracy and Security Project at Stanford University. In 1995, the U.S. approved a visa for then-President Lee Teng-hui to give a public speech at Cornell University, which was a step up from a transit stop like Tsai's New York visit, Templeman noted.

"The optics of Taiwan's transition to democracy compared to China's post-Tiananmen crackdown generated tremendous sympathy in Washington for Taiwan in the trilateral relationship, and a disinclination to adhere to self-imposed restrictions on America's interactions with Taiwanese counterparts," Templeman said of that period. "There's a similar dynamic driving the deepening of U.S.-Taiwan official interaction right now, but it still hasn't gone quite as far as it did in the late George H.W. Bush era."

Transit stops in the U.S. offer a chance for Taiwan's top leader to meet with American politicians -- typically members of Congress -- as well as members of the Taiwanese-American community. All told, they do not have much practical impact on the relationship, but they are a way to signal support for Taiwan.

They can also be a way to indicate displeasure with Taiwan's leadership. Former President Chen Shui-bian, for example, was so disliked by the administration of George W. Bush that by the end of his second term the U.S. only granted him a stopover in Anchorage, Alaska, at the height of winter. 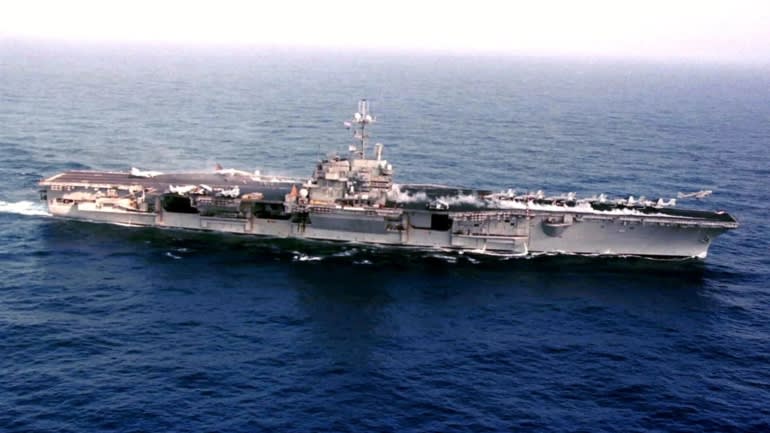 Several precedents were broken last year when Tsai transited through Los Angeles. Though she only stayed one night, compared with two in New York this week, she visited Taiwan's de facto consulate in LA, held a news conference, gave a public speech at the Ronald Reagan Presidential Library, and received a police escort resembling what would be provided a head of state of a country with which the U.S. had formal diplomatic ties.

"This [New York] transit, and the eased restrictions on the president's activities, reflects the Trump administration's trust in Tsai's government and desire to provide reassurance as Taiwan faces growing pressure from China," said Bonnie Glaser, director of the China Power Project at the Center for Strategic and International Studies in Washington.

While Beijing may have been fuming at Tsai's New York visit, many Taiwanese-Americans were celebrating. Among them was Borcheng Hsu, a community organizer involved with the activist coalition Keep Taiwan Free.

While Tsai's trip shows that relations between the U.S. and Taiwan are at their strongest in decades, it also prompted China's ambassador to Washington to hit out at Taipei.

Cui Tiankai wrote on Twitter: "#Taiwan is part of #China. No attempts to split China will ever succeed. Those who play with fire will only get themselves burned. Period."

Taiwan's foreign ministry blasted back on the social media platform: "Liberty rules OK in the land of the free & home of the brave. But @AmbCuiTiankai doesn't get it. Chinese people should first be allowed the freedom to tweet."