'Turkic world' wants a voice in the new global order ISTANBUL -- Leaders of six Turkic states -- spanning Central Asia, the Caucasus and Asia Minor -- plus Hungary gathered in a tightly secured island in Istanbul on Friday, agreeing to explore further cooperation and integration amid fears that the instability in Afghanistan could spill over into the region in forms of radicalism, terrorism and migration.

Heads of state from the Turkic-speaking countries of Turkey, Azerbaijan, Kazakhstan, Uzbekistan, and Kyrgyzstan gathered for the eighth summit of the Turkic Council, officially known as Cooperation Council of Turkic Speaking States. Hungary has observer status with the group.

The council also welcomed Turkmenistan as a new observer, bringing together the full Turkic family. Turkmenistan embraces a "permanent neutrality" policy, and has avoided becoming a full member to such groupings.

The leaders agreed to change the council's name to "Organization of Turkic States," and to set further rules on becoming an observer or the new status of "partner."

The rebranding of the group comes at a time when powers such as China and Russia gear up to fill in the void after the U.S. pulled out of Afghanistan.

Perhaps reflecting the ambitions of host and leader, Turkish President Recep Tayyip Erdogan, the heads of state were greeted on Democracy and Freedom Island in the Marmara Sea by an Ottoman military band performing one of the imperial anthems with the lyrics "long live the Turkic state." 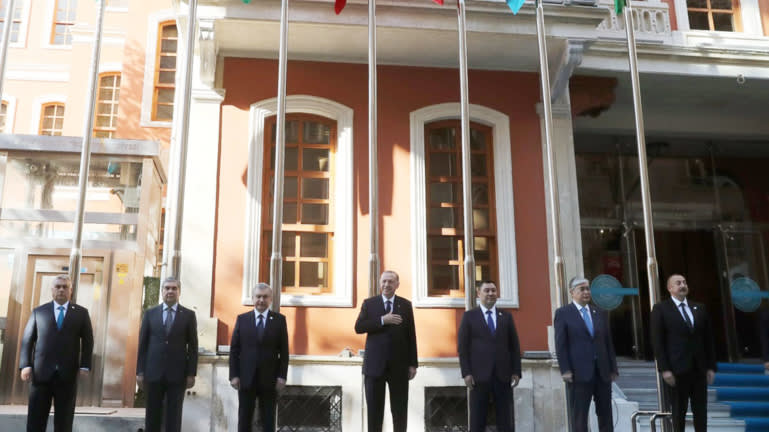 "We strive for a Turkic world that lives in security and prosperity, which contributes to peace and stability within and with its surroundings, while playing a leading role to solutions of global matters," Erdogan told a news conference after the meeting.

The group's six Turkic countries have a cumulative gross domestic product above $1 trillion, with a combined population of about 160 million.

Visiting Kazakhstani Minister of National Economy Aset Irgaliyev told Nikkei Asia that with the new organization, member and observer countries will boost collaboration in fields such as manufacturing, trade, transport and logistics and tourism, while utilizing the group's first joint financial instrument, the Turkic Investment Fund, "which is expected to be adopted in the second half of next year."

The organization's Deputy Secretary-General Gismat Gozalov, of Azerbaijan, suggested there are about 15 countries showing interest in an observer or partner status.

Ukraine, which is home to a Turkic Crimean Tatar minority, has voiced intention to become an observer state. The Turkic grouping could offer the country one more organization to lean on, as it faces pressure from Russia, which seized and annexed the Crimea Peninsula in 2014.

Erdogan said, "As permanent and observer members, we are taking steps to strengthen our institutional structure and the vision of the organization."

"We adopted the Istanbul Declaration, confirming our determination to further enhance political solidarity, economic cooperation, strengthening commercial and cultural contacts as well as relations between our societies," he told the news conference.

Erdogan pointed to a September meeting of Turkic foreign ministers regarding Afghanistan as "the first occasion to show our resolve to take the initiative in the face of regional developments" as an organization.

The summit declaration called for a sustained effort to provide urgent humanitarian assistance to Afghanistan and called for international support to alleviate the country's troubled economy. 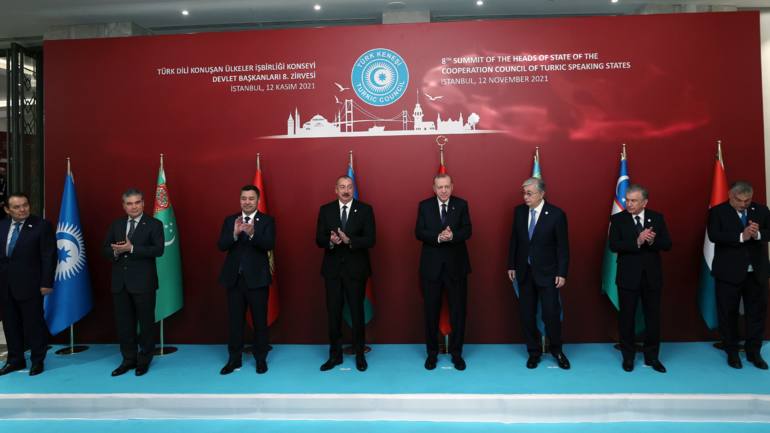 Leaders of the Cooperation Council of Turkic Speaking States meet in Istanbul on Nov 12. (Photo courtesy of the Turkish presidency)

"No one should feel disturbed from the increasing influence of Turkic states and should work to become a part of this voluntary structure which rises on the foundations of ancient historical, humanitarian relations," Erdogan stressed, in a possible nod to Moscow, Beijing and Tehran.

During the opening speeches at the summit, Azerbaijani President Ilham Aliyev said, "We are facing new threats and challenges almost every month but unfortunately, leading countries of the world are not taking appropriate measures for tackling these difficulties. I am sure, as the Organization of Turkic States, we will do our best for our countries' rights as this is a sincere partnership."

Seeking to boost its international presence, the organization will donate 2.5 million doses of COVID-19 vaccines to African countries, of which 2 million will come from Turkey.

The Turkic grouping is especially important to Turkey, the new rotating president and the host country of the headquarters, which sees the organization as an instrument to thrust itself further into Central Asia, where regional powers Russia, China, India and Iran vie for influence.

Turkey began its courtship of the Central Asian Turkic states, with which it shares ethnic, religious, cultural and linguistic roots, after the collapse of Soviet Union. It was the first country to recognize the countries after their independence in the 1990s, opening embassies and connecting direct flights, according to Turkey's Deputy Foreign Minister Yavuz Selim Kiran.

But despite the high ambitions to project influence into the region in the post-Soviet era, Turkey did not have the economic or military muscle to fully engage with the newly independent Turkic states at the time. 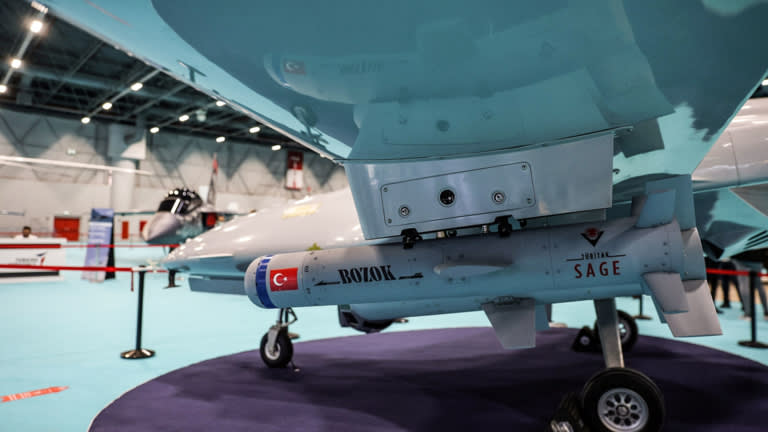 TB2 drone of Turkish drone-maker Baykar is seen at the SAHA EXPO Defense & Aerospace Exhibition in Istanbul on Nov. 10.   © Reuters

That has gradually changed. In the mid-2000s, Turkey managed to provide an export route for Azerbaijani oil and gas via Georgia, all by-passing Russia, with help from Western countries.

That success in Azerbaijan was carefully watched by Central Asian Turkic states.

Ankara Haci Bayram University professor Firat Purtas said, "As Turkic states want to diversify their relations from regional heavyweights like Russia or China to avoid overdependence, enhanced relations with Turkey are providing a partial hedge or cushioning role against pressures from big powers."

Professor Mehmet Seyfettin Erol, head of think tank Ankara Center for Crisis and Policy Studies, said, "The organization can be seen as a cultural-economic integration movement for Turkic states, as they target a prosperous future, trying to draw their own road-map with their own free-will."

It will serve "as a balancing party in Asia, as powers like Russia or China historically want to dominate the region with hard and soft power elements," he said.