SINGAPORE -- The U.S. and Taiwan are in the final stages of preparation for a strategic bilateral dialogue between security officials, three people with knowledge of the matter told Nikkei.

The dialogue, scheduled to take place by the end of this month in the U.S., is expected to focus on specific measures for weapons provision and military drills.

Officials from the two sides will discuss details of security cooperation under a regular framework known as the "Monterey talks" -- last held in autumn 2021 in the U.S., according to Taiwanese media. As a general rule, neither plans for the talks nor details are publicly disclosed.

One of the sources said the key theme for the upcoming dialogue would be weapons support from the U.S., with Washington aiming to prioritize the sale of weapons that would be effective in blocking potential Chinese landing operations on the island.

The U.S. Congress is considering a plan to provide several billion dollars of financial support to Taiwan so the island can procure weapons, Nikkei reported last month, citing three sources connected to the legislature. 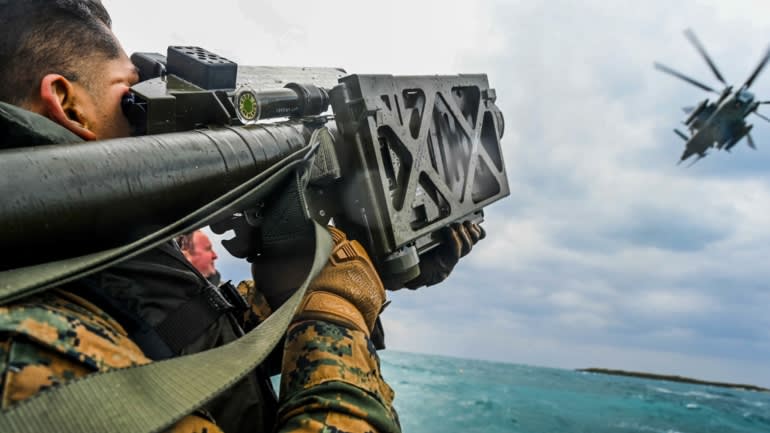 The Biden administration intends to prioritize the sale of weapons with what it calls "asymmetric capabilities" -- those that are agile, inexpensive and effective in dealing with Chinese amphibious operations. Specifically, they cover anti-ship missiles and air defense systems, as well as systems for gathering intelligence needed to identify enemy movements and for initiating early warnings.

But F-16 fighter jets, which the U.S. government has already decided to sell to Taiwan, might not fall under this category. This implies that the bar for additional fighter jet sales may be set higher in the future.

By prioritizing asymmetric weapons, the U.S. intends to quicken reinforcement of capabilities in preventing the Chinese military from landing operations on Taiwan. It also aims to encourage Taiwan to allocate its budget more efficiently on the defense front.

It appears that the U.S. has prepared a list of weapons and systems it recommends Taiwan to purchase, and selected about 20 specific weapons and other items as preferred subjects of sale.

Taiwan was a hot theme at the weekend's Shangri-La Dialogue security summit in Singapore.

"Now, as a part of our One China policy, we will continue to fulfill our commitments under the Taiwan Relations Act," U.S. Defense Secretary Lloyd Austin said on Saturday. "And that includes assisting Taiwan in maintaining a sufficient self-defense capability."

Austin also warned of "growing coercion" from Beijing on Taiwan, pointing to "a steady increase in provocative and destabilizing military activity near Taiwan."

Chinese Defense Minister Wei Fenghe on Sunday hit out at the U.S. for its Indo-Pacific strategy and perceived "threats against China," while saying the notion of Taiwan independence was a "delusion."

"Let me make this clear -- if anyone dares to secede Taiwan from China, we will not hesitate to fight," Wei said. "We will fight at all costs and we will fight to the very end. This is the only choice for China."

Wei added that China would "definitely realize its reunification" with Taiwan.