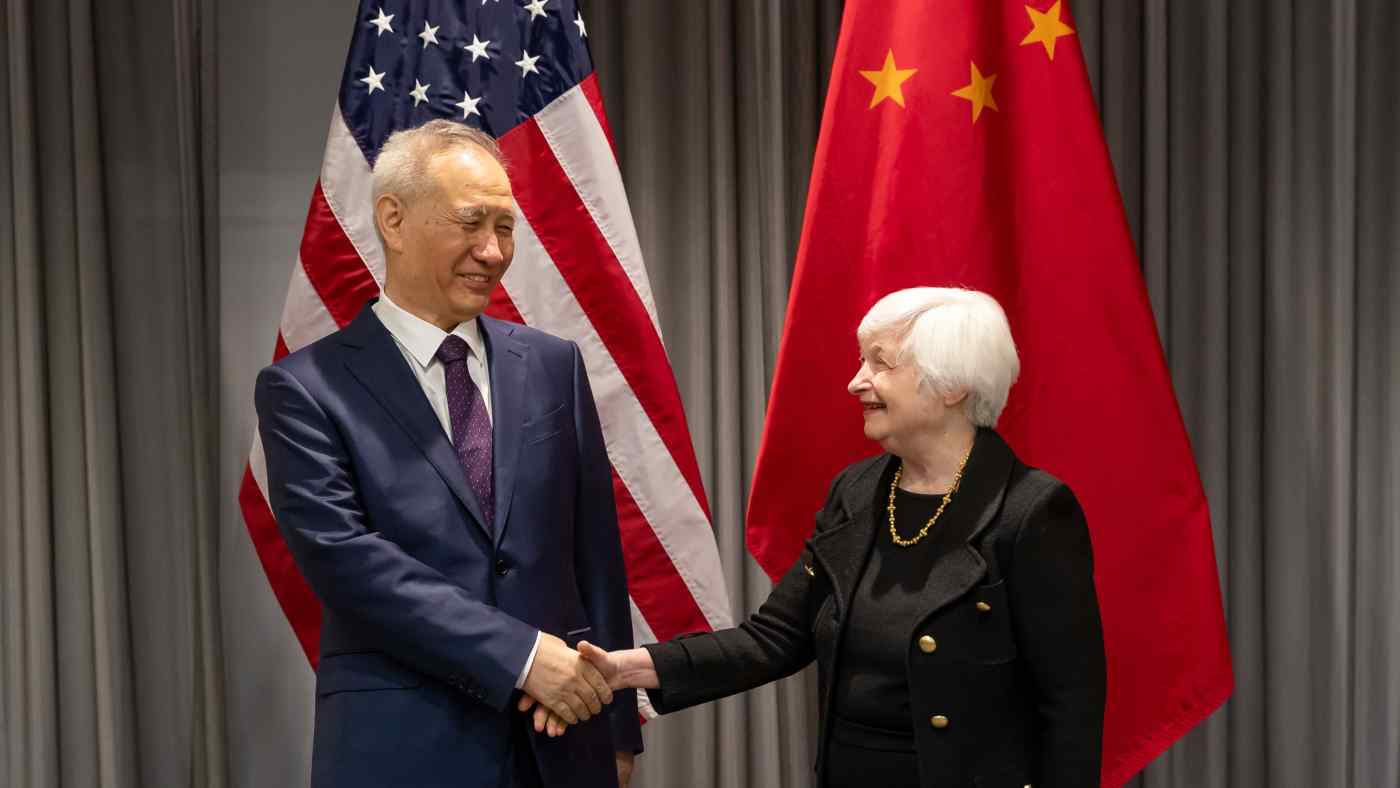 ZURICH (AP) -- U.S. Treasury Secretary Janet Yellen met Wednesday with her Chinese counterpart and pledged an effort to manage differences and "prevent competition from becoming anything ever near conflict" as the two nations try to thaw relations.

Yellen's first face-to-face meeting with Vice Premier Liu He in Zurich is the highest-ranking contact between the two countries since their presidents agreed last November to look for areas of potential cooperation.

Liu, for his part, said he was ready to work together to seek common ground between China and the U.S.

"No matter how circumstances change, we should always maintain dialogue and exchanges," he said.

A U.S. Treasury readout of their meeting says the two agreed that the U.S. and China would cooperate more on climate finance issues and would both work to support "developing countries in their clean energy transitions." The readout also indicates that Yellen plans to travel to China and welcomes her counterparts to the U.S. in the near future.

The meeting comes as the U.S. and Chinese economies grapple with differing, but intertwined challenges on trade, technology and more.

Yellen, in opening remarks in front of reporters, told Liu: "While we have areas of disagreement, and we will convey them directly, we should not allow misunderstandings, particularly those stemming from a lack of communication, to unnecessarily worsen our bilateral economic and financial relationship."

She said the two countries "have a responsibility to manage our differences and prevent competition from becoming anything even near conflict."

Both economies have their challenges.

The Chinese economy is reopening after a COVID-19 resurgence killed tens of thousands of people and shuttered countless businesses. The U.S. is slowly recovering from 40-year-high inflation and is on track to hit its statutory debt ceiling, setting up an expected political showdown between congressional Democrats and Republicans. The debt issue is of keen interest to Asia, as China is the second-largest holder of U.S. debt.

There is also the Russian invasion of Ukraine, which hinders global economic growth -- and has prompted the U.S. and its allies to agree on an oil price cap on Russia in retaliation, putting China in a difficult spot as a friend and economic ally of Russia.

"A wrong policy move or a reversal in the positive data and we could see the global economy head into a recession in 2023," said Josh Lipsky, senior director of the Atlantic Council's GeoEconomics Center. "Both countries have a shared interest in avoiding that scenario."

The World Bank reported last week that the global economy will come " perilously close " to a recession this year, led by weaker growth in all the world's top economies -- including the U.S. and China. Low-income countries are expected to suffer from any economic downturns of superpowers, the report said.

"High on the list is debt restructuring," Lipsky said of Wednesday's talks. Several low-income countries are at risk of debt default in 2023 and many of them owe large sums to China.

"Leaders have been trying for two years to get some agreement and avoid a wave of defaults but there's been little success and one reason is China's hesitancy. I expect Yellen to press Liu He on this in the meeting," Lipsky said.

Liu laid out an optimistic vision for the world's second-largest economy in an address Tuesday at the World Economic Forum in Davos, Switzerland.

"If we work hard enough, we are confident that in 2023, China's growth will most likely return to its normal trend. The Chinese economy will see a significant improvement," he said.

After her stop in Switzerland, Yellen will travel to Zambia, Senegal and South Africa this week in what will be the first in a string of visits by Biden administration officials to sub-Saharan Africa during the year.

Zambia is renegotiating its nearly $6 billion debt with China, its biggest creditor. During a closed-door meeting at the Africa Leaders Summit in Washington in December, Yellen and Zambian President Hakainde Hichilema discussed "the need to address debt sustainability and the imperative to conclude a debt treatment for Zambia," according to Yellen.

The Zurich talks are a follow-up to the November meeting between President Joe Biden and China's Xi Jinping on the sidelines of the Group of 20 summit in Bali, Indonesia. The two world leaders agreed to empower key senior officials to work on areas of potential cooperation, including tackling climate change and maintaining global financial, health and food stability. Beijing had cut off such contacts with the U.S. in protest of then-House Speaker Nancy Pelosi's trip to Taiwan in August.

"We're going to compete vigorously. But I'm not looking for conflict," Biden said at the time.

U.S. Secretary of State Antony Blinken will be traveling to China in early February.

Among economic sticking points, the Biden administration blocked the sale of advanced computer chips to China and is considering a ban on investment in some Chinese tech companies, possibly undermining a key economic goal that Xi set for his country. Statements by the Democratic president that the U.S. would defend Taiwan against a Chinese invasion also have increased tensions.

And while the U.S. Congress is divided on many issues, members of the House agreed last week to further scrutinize Chinese investments.

New House Speaker Kevin McCarthy of California has identified the Communist Party of China as one of two "long-term challenges" for the House, along with the national debt.

"There is bipartisan consensus that the era of trusting Communist China is over," McCarthy said from the House floor last week when the House voted 365 to 65 -- with 146 Democrats joining Republicans -- to establish the House Select Committee on China.

Last year, the U.S. Commerce Department added dozens of Chinese high-tech companies, including makers of aviation equipment, chemicals and computer chips, to an export controls blacklist, citing concerns over national security, U.S. interests and human rights. That move prompted the Chinese to file a lawsuit with the World Trade Organization.

Yellen has been critical of China's trade practices and its relationship with Russia, as the two countries have deepened their economic ties since the start of the war in Ukraine. On a July call with Liu, Yellen talked "frankly" about the impact of the Russia's invasion of Ukraine on the global economy and "unfair, nonmarket" economic practices, according to a U.S. recap of the call.