BANGKOK -- Myanmar is facing fresh pressure from the international community to resolve the plight of Rohingya refugees who fled the country.

United Nations Secretary-General Antonio Guterres on Sunday said he is "deeply concerned" about the refugees' situation. He was speaking at a summit with leaders from the Association of Southeast Asian Nations, including Myanmar's State Counselor Aung San Suu Kyi.

Guterres stressed that Myanmar has a responsibility to "ensure a conducive environment for the safe, voluntary, dignified and sustainable repatriation of refugees."

The refugees now make up one of the world's largest stateless populations.

The pressure on Suu Kyi's government is also growing within ASEAN. Indonesian President Joko Widodo tweeted on Saturday that the matter came up in his own talks with Guterres. "We discussed the issue of the humanitarian crises in Rakhine State and Palestine, while offering Indonesia's contribution to solving the difficult problems," the president wrote in Indonesian. 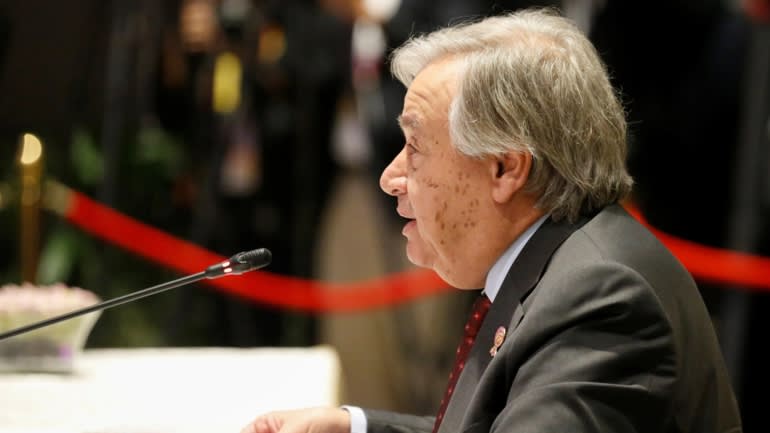 ASEAN members typically avoid interfering in each others' affairs and refrain from mentioning individual countries' problems in joint statements at summits or ministerial meetings. The Rohingya issue, however, is becoming an exception -- albeit a contentious one.

Last year, Indonesia and Malaysia, as Muslim-majority nations in the economic bloc, pushed participants in the ASEAN and East Asia summits to include the Rohingya issue in the chairman's statements. The U.S. also supported this.

A draft of the chairman's statement for this year's East Asia Summit, obtained by the Nikkei Asian Review, includes a paragraph mentioning Rakhine State as "a matter of concern." An earlier draft dated Oct. 11 did not have the paragraph.

The changing content suggests there has been a heated debate among the summit participants -- the 10 ASEAN states plus China, Japan, South Korea, Australia, New Zealand, India, Russia and the U.S.