From Indonesia, an 'America First' warning; from Singapore, a call for reflection 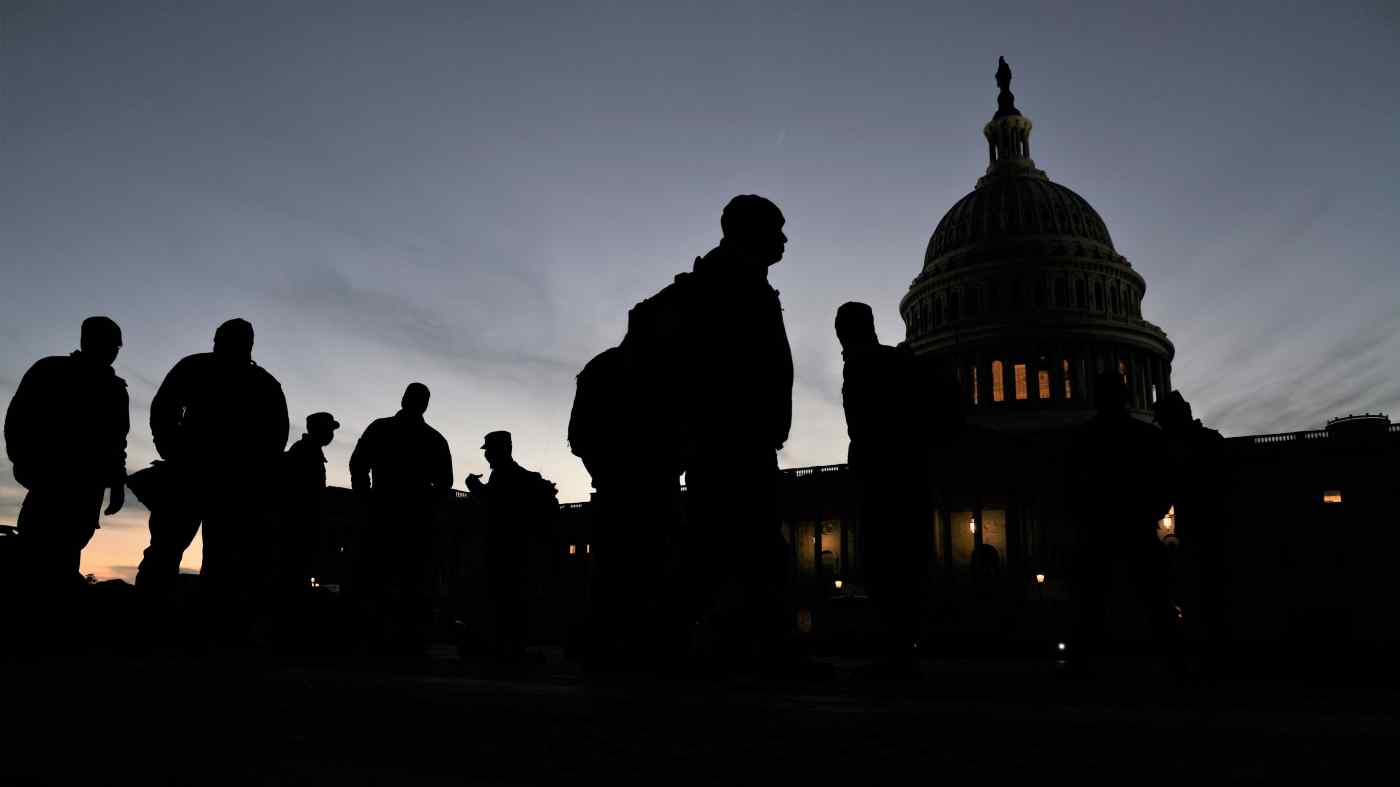 From Indonesia and India to China and Singapore, scenes of unrest at the U.S. Capitol have dimmed the world's image of America.   © Reuters
Nikkei staff writersJanuary 8, 2021 19:01 JSTUpdated on January 8, 2021 20:55 JST | North America
CopyCopied

JAKARTA/SINGAPORE -- U.S. President Donald Trump conceded the 2020 election a day after his supporters stormed the Capitol, but reactions from across Asia suggest the damage to America's global reputation may not be easily undone.

Some Asian leaders and diplomats spoke out against the violence, which delayed but did not stop Congress' certification of Joe Biden's victory. Others kept quiet. Yet, from Indonesia and India to China and Singapore, the scenes of protesters charging through the halls of American democracy clearly made an impression.

"U.S. President Donald Trump might have said he regretted what happened, but he cheered inside -- because he really wants to show that the American people are rejecting the election outcome where he's been declared [the loser]," Dino Patti Djalal, a former Indonesian ambassador to the U.S., said in a TV interview on Thursday.

The ex-diplomat thinks the "America First" attitude among Trump supporters will not fade anytime soon. "I don't trust President Trump at all. I see him as a person who has no conscience, no morals, no integrity. I think he will nominate himself as a president again in 2024, because he has an enormous ego."

Also in Southeast Asia, former Thai Prime Minister Abhisit Vejjajiva voiced disappointment. He told Nikkei Asia the incident was "the result of having a populist leader and supporters who received information only from one side."

Saying this should not have happened in a strong democracy, Abhisit cautioned, "It depends on the coming president, how he can bring trust back." 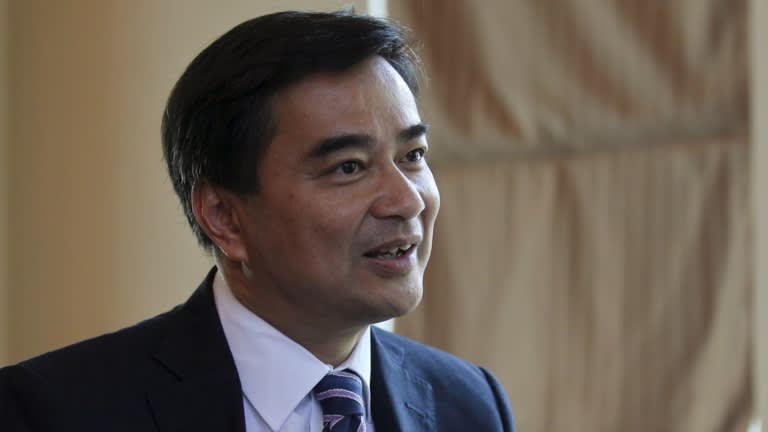 Thailand's former Prime Minister Abhisit Vejjajiva, seen in a file photo, says it will be up to Biden to restore trust in U.S. democracy.   © Reuters

Current Thai Prime Minister Prayuth Chan-ocha, who has faced months of youth protests against his government, has been silent. But some pro-establishment politicians used the U.S. example to negate the youth movements' demands.

"Here's the model of democracy they are trying to force upon people around the world to follow," Senator Somchai Sawangkarn posted on his Facebook page. Pareena Kraikupt, an MP from the ruling Palang Pracharat Party, wrote: "In the U.S., they use real bullets. In Thailand, it's just water-spraying."

Over in Singapore, Prime Minister Lee Hsien Loong appears to have refrained from commenting on the Capitol incident. But Speaker of Parliament Tan Chuan-Jin said on Facebook that the scenes were "unbelievable" and "very sad" to witness.

"There is always due process and the rule of law needs to be respected. When individuals and groups decide to take the law into their own hands, it will essentially be mob justice," Tan went on.

He suggested this is a time for reflection not only in America but among Asian countries as well: "We all need to reflect on how we wish to approach this discourse in our respective societies." 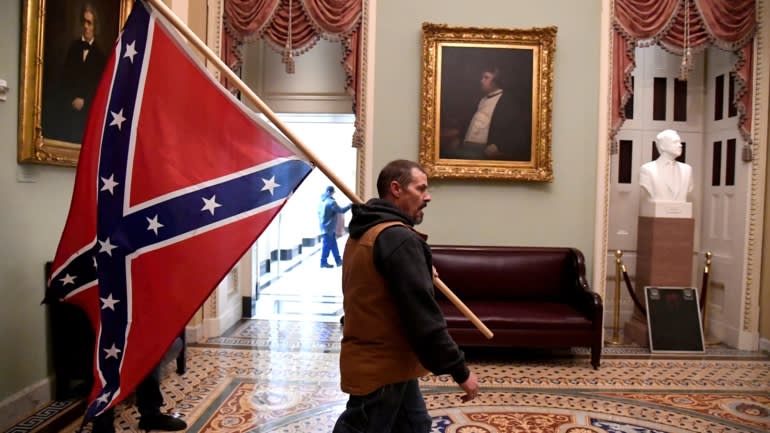 A Trump supporter carries a Confederate flag through the Capitol during the infiltration.   © Reuters

Like Lee, Japanese Prime Minister Yoshihide Suga has not weighed in on the unrest. On Friday, he told reporters that he "hopes U.S. citizens will unify under the next president, Joe Biden."

The chief cabinet secretary, Katsunobu Kato, also gave a reserved response when asked about it on Thursday, saying only that "the Japanese government is concerned and watching carefully."

Kato acknowledged that Japan, a close U.S. ally, is "hoping for a peaceful transfer of power" in Washington but stressed, "This is about U.S. domestic politics so the [Japanese] government will refrain from making a comment."

Indian Prime Minister Narendra Modi was more vocal, taking to Twitter on Thursday. "Distressed to see news about rioting and violence in Washington," he wrote, adding, "The democratic process cannot be allowed to be subverted through unlawful protests."

China, after years of wrangling with the Trump administration, quickly sought to seize the moment's political value.

The Global Times, a Communist Party tabloid, described the rioting as a sign of America's "internal collapse." Chinese Foreign Ministry spokeswoman Hua Chunying, for her part, echoed the Thai arguments against protesters and compared the Western reaction to the democracy movement in Hong Kong.

"If you still remember how some U.S. officials, lawmakers and media described what's happened in Hong Kong, you can compare that with the words they've used to describe the scenes in Capitol Hill," she said.

Trump's backers, she noted, have been called "extremists" and "thugs" who brought "disgrace." On the other hand, she said the Hong Kong demonstrations were described as "a beautiful sight."

"What's the reason for such a stark difference in the choice of words?" Hua said. "Everyone needs to seriously think about it and do some soul-searching."

Other U.S. adversaries, such as Iran and Russia, also took the opportunity to paint the American political system as fraying and inferior.

"What happened in America showed what a failure Western democracy is," Iranian President Hassan Rouhani said in a televised speech, according to Reuters. "A populist man damaged the reputation of his country."

Reuters quoted Russian Foreign Ministry spokeswoman Maria Zakharova as saying: "The electoral system in the United States is archaic, it does not meet modern democratic standards, creating opportunities for numerous violations, and the American media have become an instrument of political struggle."

America's allies, including Five Eyes security partners Australia and New Zealand, could only watch aghast and hope that this week's developments were not a sign of turmoil to come.

"Like so many others, I've been watching what's happening in the United States," New Zealand Prime Minister Jacinda Ardern tweeted. "I share the sentiment of friends in the US -- what is happening is wrong."

Her Australian counterpart Scott Morrison chimed in: "Very distressing scenes at the US Congress. We condemn these acts of violence and look forward to a peaceful transfer of government to the newly elected administration in the great American democratic tradition."