Focus of confrontation with Washington shifts from economy to national visions "China has Chinese-style democracy," Yang said, not mincing words in his first encounter with the U.S. President Joe Biden's team.

Yang's message was clear: The Communist Party rule led by President Xi Jinping succeeded in containing the coronavirus pandemic. Its system is superior to the U.S.-style democracy, which miserably fumbled its own pandemic response.

His confident declaration represented a fundamental shift in the U.S.-China dynamic, one that China has been patiently awaiting for the past 120 years. This collage comparing the signing of the unfair Boxer Protocol in 1901 to the U.S.-China meeting in Anchorage, Alaska, went viral on Chinese social media. (Photo taken from Weibo)

After the Anchorage meeting, the People's Daily posted a collage of two photos on the Chinese social media site Weibo that went viral. The image contrasts the signing of the Boxer Protocol between the Qing Dynasty and the eight-nation alliance in 1901 with the latest Anchorage meeting.

Being forced to pay massive reparations under the unfair treaty, Qing Dynasty was put on a path to its eventual demise. The signing of the Boxer Protocol brought in the most humiliating chapter in Chinese history.

Now, China, which allowed brutal exploitation by Western powers 120 years ago, has bounced back. Yang and Foreign Minister Wang Yi traveled 6,000 kilometers to American soil to demonstrate the historic comeback, and the theatrics were a perfect fit for the 100-year anniversary of the Communist Party's founding this year.

With a newly confident China facing Biden's new approach to foreign policy, the standoff between the two superpowers has now entered a new stage. It has evolved from an economic rivalry to one that encompasses broader world views.

Biden seeks to corner China by forming a united front with like-minded allies. The administration has spoken out against Beijing's persecution of the Uyghurs, its crackdown on the pro-democracy movement in Hong Kong and the pressure campaign against Taiwan.

The U.S. meticulously prepared for the meeting as well. First, it held an online Quad summit, bringing together the leaders of Japan, Australia and India for the first time.

Then, Blinken and Defense Secretary Lloyd Austin flew to East Asia for two-plus-two meetings with their counterparts in Japan and South Korea -- both vital allies in countering China's rise in the region. 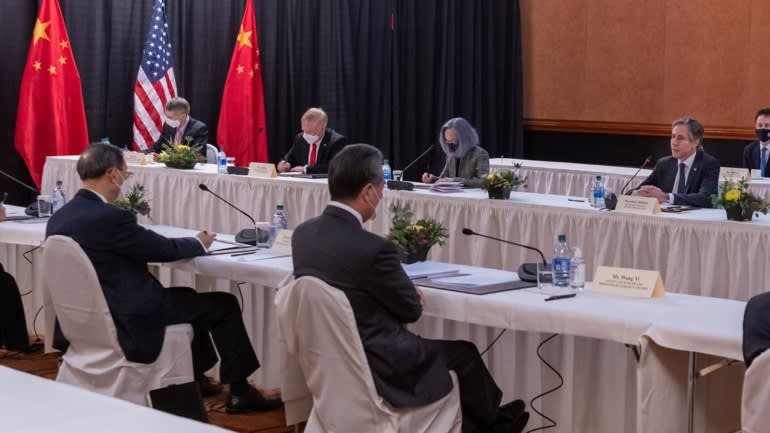 U.S. Secretary of State Antony Blinken speaks as China's Yang Jiechi and Wang Yi listen at their meeting in Anchorage, Alaska, on March 18. (Photo courtesy of the State Department)

Anchorage was chosen carefully for its location -- a midpoint between Washington and Beijing but is a U.S. state.

The revival of the East-West confrontation, which is far older than the Cold War between the U.S. and the former Soviet Union, poses a serious challenge for the world.

The rivalry could hamper cooperation in areas in which the two sides could work together for global benefit , such as defeating the coronavirus pandemic and reversing climate change.

Daniel Russel, a former assistant secretary of state for East Asian and Pacific Affairs, said the kind of selective cooperation between the two countries possible in past has become much more difficult.

"China is stronger. China is more confident," he said. "China's leader is a much more aggressive leader. And the United States is in a weaker position, today, than it was five years ago."

In a sign of that confidence, the Chinese delegation issued a statement after the meeting, warning Washington not to push too far.

"The governing status of the Communist Party of China and the security of China's socialist system should not be damaged, and that is a red line that should never be crossed," the document stated.

There was one Asian country among the eight nations that forced the lopsided Boxer Protocol on the Qing Dynasty -- Japan. China has not forgotten that either.

"Japan, driven by the selfish aim to check China's revitalization, willingly stoops to acting as a strategic vassal of the United States," said Zhao Lijian, Chinese Foreign Ministry spokesman at a news conference Wednesday. It was a warning to Japan not to join the West, like it did 120 years ago.

In a document issued after the two-plus-two meeting of U.S. and Japanese diplomatic and defense chiefs, the two countries expressed deep concerns toward China's rising threat. Beijing is certain to try to pressure Japan, whose economy is deeply dependent on China. Japan's diplomatic skills, too, will be tested.