CHONGQING -- When U.S. President Donald Trump invited lead Chinese trade negotiator Liu He to the Oval Office in January 2019, sitting across the Resolute Desk in the center of the room was U.S. Trade Representative Robert Lighthizer.

Secretary of State Mike Pompeo sat to the side of the room, looking on.

Today, a year and a half later, Pompeo has emerged as the administration's key figure in crafting China policy, leading a much tougher line on Beijing.

And Chinese American scholar Miles Yu, a member of the State Department's policy planning staff -- the department's internal think tank -- has drawn Beijing's ire for being seen as part of the brain trust behind the hawkish policy. When U.S. President Donald Trump invited Chinese trade negotiator Liu He to the Oval Office in January 2019, Secretary of State Mike Pompeo sat to the side. Today, Pompeo plays a more central role in China policy. (Photo courtesy of the White House)

Born in 1962, Yu grew up amid the Cultural Revolution and is considered an expert on the Communist Party's methods. Pompeo has described Yu as "a central part of my team," while David Stilwell, assistant secretary of state for East Asian and Pacific affairs, has called him a "national treasure."

Yu reportedly wrote the base of the speech Pompeo delivered in July that denounced the Communist Party's "designs for hegemony" and called Chinese President Xi Jinping a "true believer in a bankrupt totalitarian ideology."

In an interview published this June by The Washington Times, for which he used to write as a China columnist, Yu used similar language in calling Xi "a die-hard Communist who believes in the ideology."

At a State Department meeting in December, Yu characterized China as on a quest for global dominance, driven by nationalism fueled by past humiliation as well as Leninism.

Raised in a suburban district of Chongqing, Yu studied history at the prestigious Nankai University in Tianjin before moving to the U.S. in the 1980s and receiving his Ph.D. at the University of California, Berkeley. 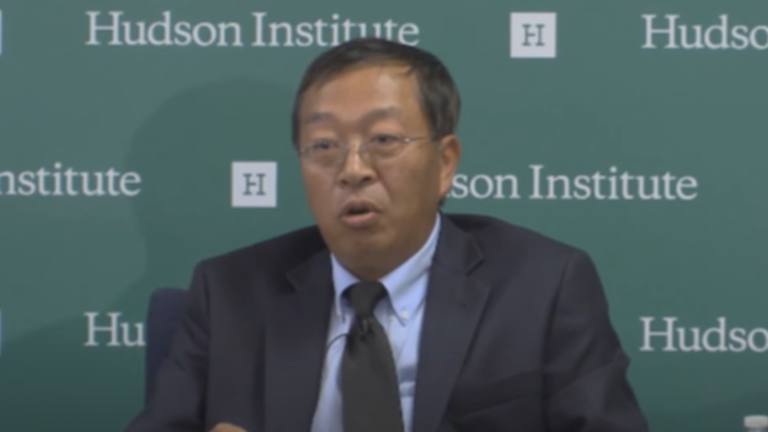 Miles Yu speaks at a Hudson Institute event in Washington.

Yu has been a history professor at the U.S. Naval Academy since 1994, covering China, East Asia, military and diplomatic history, and non-Western warfare. He is currently on detail at the State Department's policy planning staff, located on the same floor as Pompeo's office, where he is the sole member covering China.

But as he has risen in prominence, Yu has become a target of criticism from his country of birth.

After The Washington Times profiled Yu as an architect of Pompeo's China policy, Hu Xijin, editor-in-chief of the Communist Party newspaper Global Times, called Yu a "pseudoscholar" who was "misled by some extreme voices on the internet."

Hu said that Yu left China too early, when the country was "weak" and young people and intellectuals "revered the West."

Chinese media have since piled on Yu, using similar arguments in an attempt to discredit him. A Global Times piece dismissed Yu as an "academic fanatic" whose "knowledge of China is not fundamentally different from that of many U.S. scholars who rely on secondary sources."

In Yu's childhood home district of Yongchuan, 70 km west of central Chongqing, a monument featuring the names of each year's top performers on university entrance exams is hidden with a blue cover saying the stone is "under repair."

Looking through a gap in the cover shows Yu's name erased and the graffiti "traitor" and "American stooge" scrawled in Chinese. A school monument in Miles Yu's home district had his name erased and was vandalized with insults. (Photo by Shunsuke Tabeta)

When asked about this, a woman working at a nearby store said the stone had been abruptly covered one day, but she appeared unfamiliar with Yu.

"Secretary Pompeo is definitely playing a central role in the administration's policy-making on China over the past year," said Michael Hirson, practice head for China and Northeast Asia at New York-based consulting firm Eurasia Group. "With the phase-one deal not going well, partly due to COVID-19, it has given space for foreign policy officials to push their agenda."

That policy is driven by skepticism toward career staff at the State Department, Hirson said. "It is a feature of this administration," he said. "They came into office thinking that the career staff were too timid and too conventional in their approach to China."

On Yu's outsize role, Brookings Institution fellow Ryan Hass said: "It is odd for someone in Miles Yu's position to attract the amount of press attention he has attracted. The policy planning job typically is inward-facing, with a focus on providing quality advice and recommendations to the secretary of state."

"Then again," Hass said, "this administration doesn't seem too bound by convention."