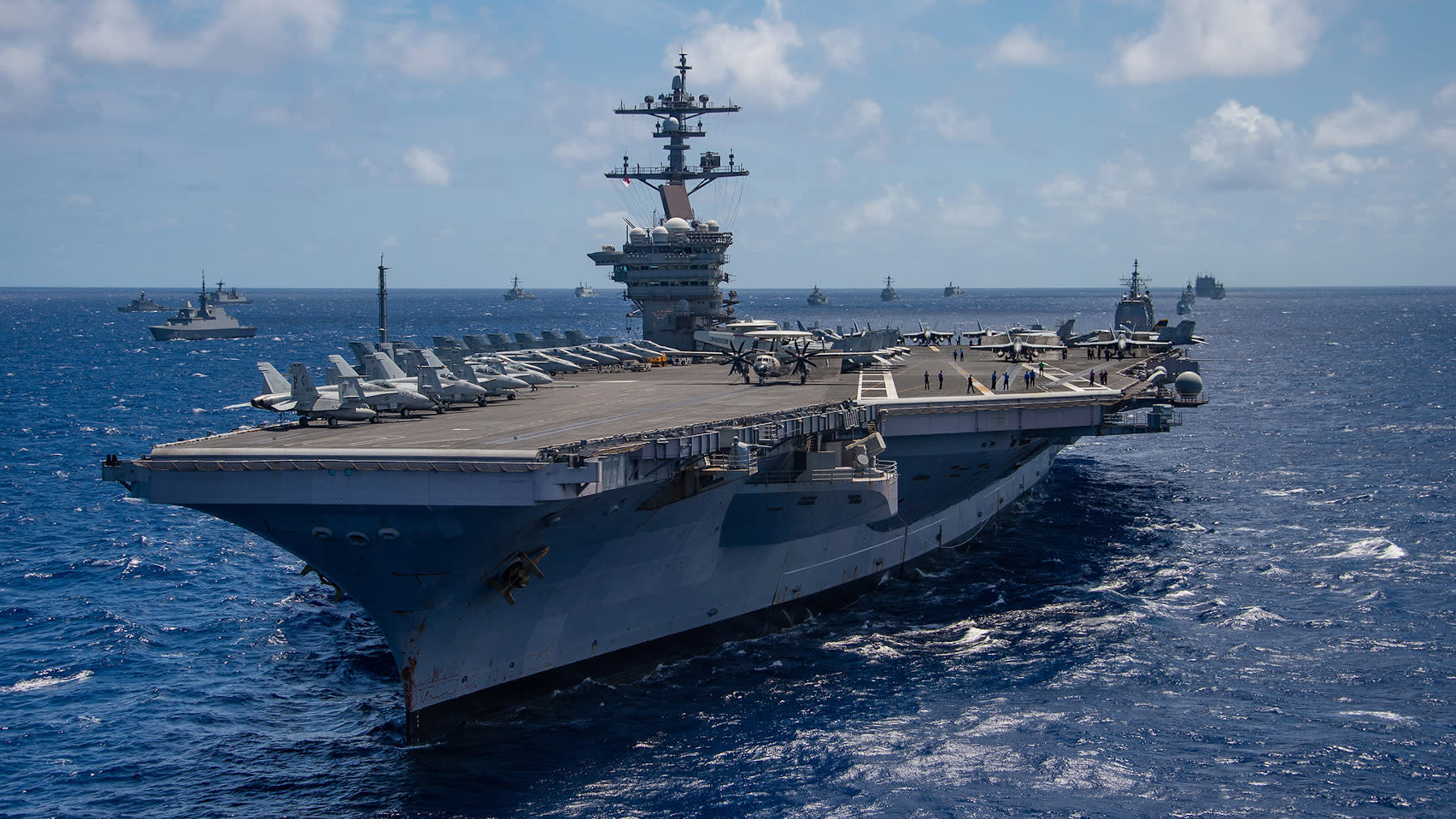 The USS Carl Vinson aircraft carrier participates in a group sail during the RIMPAC exercise off the coast of Hawaii in July 2018. (Photo courtesy of the U.S. Navy)
WAJAHAT KHAN and KEN MORIYASU, Nikkei staff writersAugust 18, 2020 08:50 JSTUpdated on August 18, 2020 10:56 JST | North America
CopyCopied

NEW YORK -- The U.S.-led Rim of the Pacific international maritime exercise, or RIMPAC 2020, kicked off Monday in a scaled-back form with China conspicuously absent from the guest list.

The biennial drill -- the biggest ocean exercise in the world -- runs to the end of August in the seas near Hawaii. With 10 countries, 22 ships, one submarine and 5,300 personnel participating in offshore-only activities this time, it is greatly reduced in size from the 2018 edition, where 25 countries took part.

This year's event "will focus solely on war fighting in the maritime domain," due to the coronavirus pandemic, 3rd Fleet Commander Vice Adm. Scott Conn said in a streamed press conference, and will include "anti-surface warfare, anti-submarine warfare and maritime interdiction operations as well as some robust live-fire events."

China joined RIMPAC for the first time with the 2014 edition and also participated in 2016. It was invited in 2018, only to then be disinvited that year over its Indo-Pacific military buildup. Not only has Beijing clearly been excluded again this year, but RIMPAC 2020 itself seems to be a stage for the Pacific navies to simulate their China scenarios.

"In spite of COVID-19, the world has not stopped," Conn said. "Nor have the demands for the free flow of commerce across the world's oceans. Our collective prosperity depends on this and we need to continue to safeguarding it."

The pandemic as well as strained ties between Washington and Beijing are responsible for the clearly different composition and dynamics of the 2020 drill, experts say.

"Washington is sending a clear message to Beijing that the U.S. will continue to punish China for its growing assertiveness in the South China Sea and elsewhere in the Indo-Pacific region," said Derek Grossman, senior defense analyst at the California-based RAND Corp.

"There were several in the U.S. who were not happy at the invitations extended in earlier editions," he said.

Shrikhande, who has served as a RIMPAC observer, said that "China would be very much on all participants' minds" and that its behavior is not "user-friendly by any reckoning."

RIMPAC, originally scheduled for earlier in the summer, comes in the wake of clear signals from Washington about Beijing in the South China Sea. U.S. Secretary of State Mike Pompeo's clear rejection in July of Chinese maritime claims there was backed by regional ally Australia. Brunei, Malaysia, the Philippines and Vietnam also contest China's claims, and Japan is engrossed in warding off ongoing Chinese incursions around the Senkaku Islands, which are administered by Japan and claimed by China as the Diaoyu.

"The Indo-Pacific is an increasingly contested space, for influence, dubious Chinese claims and grabs and for a level of tension perhaps not seen since the Korean War in the 1950s," Shrikhande said.

"The world needs to make more robust, better-coordinated stands, to create diplomatic, economic, informational and military pressure (DIME, in other words) on China," he said. "It might be the best thing to do to maintain a balance acceptable to several nations around China."

For some experts, the importance of defense diplomacy and American military clout do not stand diminished, despite the pandemic.

"Countries still see value in exercising with the United States, even during COVID-19," said research fellow Veerle Nouwens of the London-based Royal United Services Institute think tank. "Both practical value and also symbolic value are seen by naval partners around the world who are willing and able to participate in such exercises in such extraordinary times."

"Defense diplomacy does work if the aim is to build familiarity and trust," she said. "When you have navies conducting friendly exercises with one another this serves both a training and a diplomatic purpose."

"There are plenty of countries within Asia and beyond who see the value in these maritime exercises and strengthening these partnerships and interoperability with one another to ensure freedom of the seas and professional maritime conduct at sea," Nouwens said.