In speeches to UN, two leaders tout their visions for the world 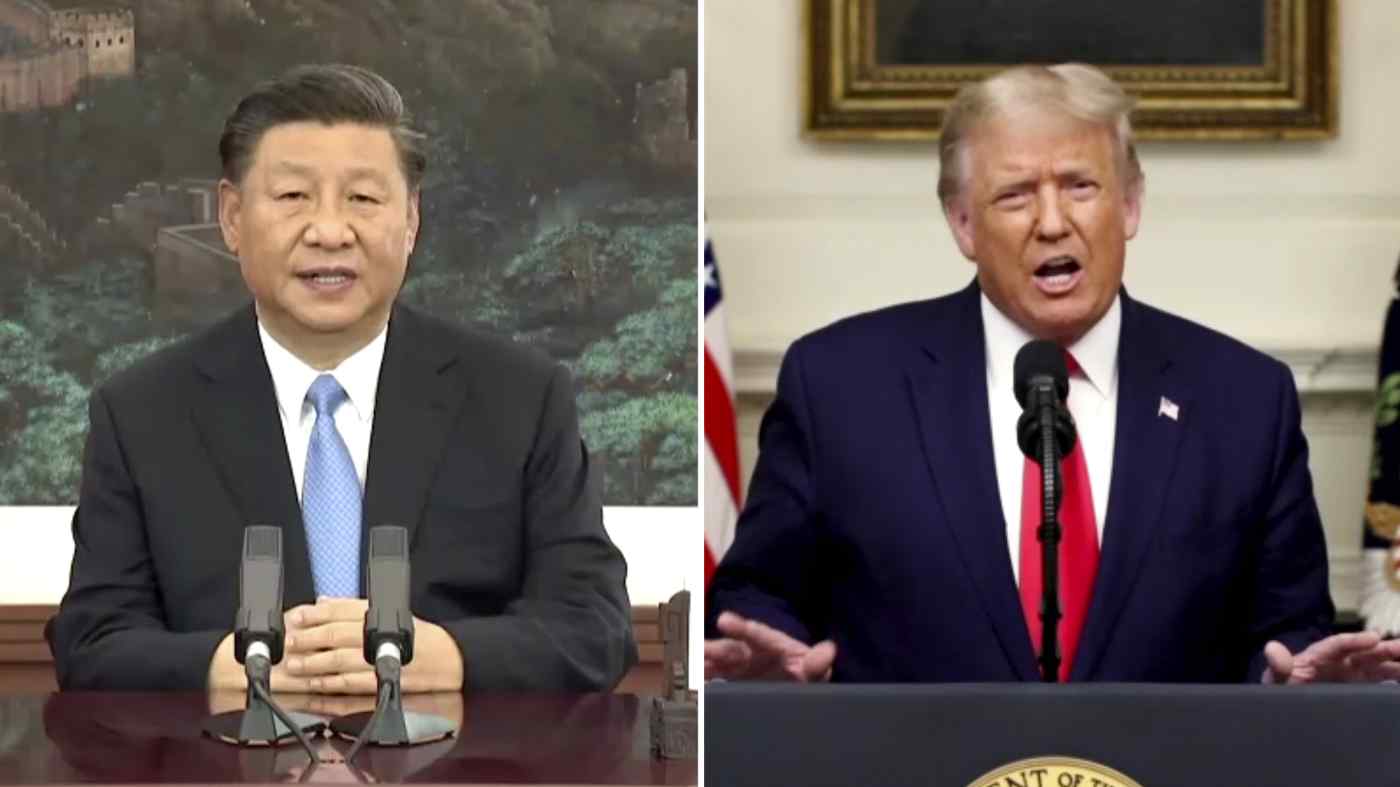 WASHINGTON/BEIJING -- U.S. President Donald Trump and Chinese President Xi Jinping exchanged virtual blows Tuesday at the U.N. General Assembly as each leader sought to convince the international community of the other side's flaws in a world looking toward post-pandemic times.

"The United Nations must hold China accountable for their actions," Trump said in a prerecorded speech from the White House.

The president ripped into China for not halting outbound flights at the outset of the coronavirus outbreak, saying it infected the world. He also blamed the country and the World Health Organization, which he said "is virtually controlled by China," for declaring that there was no evidence of human-to-human transmission.

Trump defended his stance of putting the U.S. first and said that "American prosperity is the bedrock of freedom and security all over the world."

"For decades, the same tired voices proposed the same failed solutions, pursuing global ambitions at the expense of their own people," he said. "But only when you take care of your own citizens will you find a true basis for cooperation. As president, I have rejected the failed approaches of the past, and I am proudly putting America first, just as you should be putting your countries first."

In his fourth speech to the U.N. General Assembly, Trump touted his success in brokering peace between Israel and the United Arab Emirates and Bahrain. "These groundbreaking peace deals are the dawn of the new Middle East," he said. "By taking a different approach, we have achieved different outcomes -- far superior outcomes."

Xi, who spoke via video two slots after Trump, said several COVID-19 vaccines are in third-phase clinical trials in China and will be made a global public good when development is completed. They "will be provided to other developing countries on a priority basis," he said.

Without referring to the source of the pandemic, Xi said that the people of the world are living in "an interconnected global village with a common stake" and that no country can gain from others' difficulties.

Then, in an apparent dig at Trump, the Chinese president said: "COVID-19 reminds us that economic globalization is an indisputable reality and a historical trend. Burying one's head in the sand like an ostrich in the face of economic globalization, or trying to fight it with Don Quixote's lance, goes against the trend of history."

"The world will never return to isolation," he said. "And no one can sever the ties between countries. We should not dodge the challenges of economic globalization. Instead, we must face up to such issues as the wealth gap and the development divide."

"We should stay true to multilateralism," he said, "and safeguard the international system with the U.N. at its core."

This marked Xi's first time addressing the General Assembly since 2015.

China's relations with the U.S. and Europe have deteriorated rapidly this year over its handling of the coronavirus outbreak, which originated in the Chinese city of Wuhan, as well as the controversial security law imposed on Hong Kong in June.

Still, Xi is eager to solidify China's status as a global power to rival the U.S., particularly in the post-pandemic world.

In a symbolic gesture to project his pro-U.N. stance, Xi also sent a message a day earlier to a meeting to commemorate the organization's 75th anniversary.

No country should "be allowed to do whatever it likes and be the hegemon, bully or boss of the world," he said.

International law should not "be distorted and used as a pretext to undermine other countries' legitimate rights and interests," he also said. Xi was likely hitting back at the U.S. for calling Beijing's activities in the South China Sea "completely unlawful."

The U.S. had a much lower-profile presence at the meeting. Cherith Norman Chalet, its acting deputy permanent representative to the U.N., said that "the United Nations has for too long been resistant to meaningful reform, too often lacking in transparency, and too vulnerable to the agenda of autocratic regimes and dictatorships."

The U.N. that day adopted a declaration for its 75th anniversary. "Multilateralism is not an option but a necessity as we build back better for a more equal, more resilient and more sustainable world," said the document, which urged greater coordination within the international community.