U.S. inflation: Will scrapping China tariffs be the cure? NEW YORK -- President Joe Biden's decision to review the legacy of U.S.-China trade war started by his predecessor is now under the spotlight for reasons other than still tense relations between Washington and Beijing: inflation at home.

The inflation rate hit a 40-year high in May as consumer prices surged 8.6%, the Department of Labor said on Friday. From gas to food, rising costs are putting severe pressure on American families.

As the U.S. president heads into crucial midterm elections in the fall with his Democratic Party possibly losing seats in Congress, he is confronted with a difficult choice: uphold the tariffs and face blame for keeping prices high, or roll them back and appear weak on China.

On Friday, Biden pointed the finger at Big Oil and Russia, saying spiking oil prices are a major inflationary factor while the war in Ukraine is the main cause.

"Make no mistake about it: I understand inflation is a real challenge to American families," Biden said in a statement. "My administration will continue to do everything we can to lower prices for the American people."

At a news conference in Los Angeles, the U.S. president called out large oil companies, such as Exxon Mobil, for failing to increasing production.

"Exxon made more money than God this year," said Biden. "One thing I want to say about the oil companies: They have 9,000 permits to drill, they're not drilling... because they make more money [by] not producing more oil, the price goes up."

Last month, Biden said his administration was considering waving tariffs that the Trump administration imposed on China in July 2018. Those measures were enacted under Section 301 of the Trade Act of 1974, which requires a "review of necessity" every four years.

Many economists and businesses have been urging Biden to cut trade tariffs to cool inflation in the U.S. -- brought about by severe factors including the post-COVID recovery, supply chain crisis and the Ukraine war.

"If the U.S. adjusts [the tariffs,] it will not be to help China, it will be to help the U.S.," said Shang-Jin Wei, an economist and professor of Chinese business and economy at Columbia University. "For every $100 the U.S. buys from China, roughly $40 are parts and components for U.S. companies and $60 are for households."

"Removing tariffs could help lower cost of production for U.S. firms and cost of living for households," Wei said. 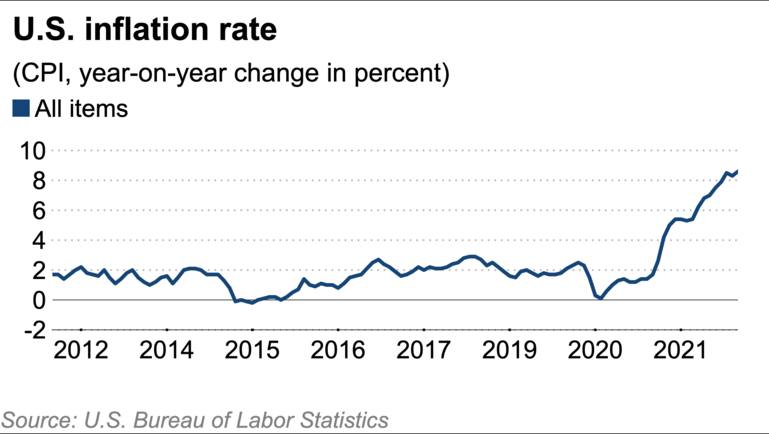 The Trump administration imposed up to 25% tariffs on Chinese goods during the trade war, which included hundreds of billions of dollars worth of Chinese consumer products. The issue of whether to keep tariffs is expected to become a political hot potato -- with backlash from some politicians and industry leaders accusing Biden of being soft on China if he was to reduce the tariffs.

Cutting tariffs on Chinese goods could lower prices in some areas, such as raw materials, but experts caution that it will not cool inflation to desired levels.

"I think some reductions may be warranted and could help to bring down the prices of things that people buy that are burdensome," Yellen said during a House Ways and Means Committee hearing. "I want to make it clear, I honestly don't think tariff policy is a panacea with respect to inflation."

But this does not mean that tariffs should stay in place as the policy has not been very effective in its initial objective, economists say.

"I don't think that imposing tariffs has changed China's behavior in any meaningful way," said David Sacks, a research fellow focusing on U.S.-China relations at the Council on Foreign Relations. "The debate has shifted, our core issues we're trying to address are the nonmarket practices by Chinese state-owned enterprises and other firms... I don't think tariffs are going to resolve our core structural issues with China."

"And we're not using [tariffs] for any leverage in ongoing debates," Sacks added.

Robert Handfield, a professor of supply chain management at the North Carolina State University, said the Biden administration will selectively reduce tariffs by industry. Solar projects will be prioritized because most solar panels come from Southeast Asia and China.

The Biden administration has already declared a two-year pause for tariffs on solar panel imports from four Southeast Asian nations and invoked the Defense Production Act to jump-start solar installations in the U.S.

Reducing tariffs "may not have material impact in the long run, but it may have a short-term impact and even then, it's not clear how much of an impact they'll have," said Handfield. "A lot of organizations have found ways around the tariffs in the interim to avoid them, it's not clear if taking them away will have an immediate impact on inflationary costs."

Some -- including groups that have influential sway in elections -- have opposed lifting the tariffs.

United Steelworkers, a labor union that claims 1.2 million members in North America and is itself a member of the Labor Advisory Committee on Trade Policy and Negotiations, an advisory group to the White House, sent a letter on June 6 to the Office of the U.S. Trade Representative, urging the Biden administration not to lift the tariffs.

The union argued the trade policies of the Chinese Communist Party were hurting American companies.

"The overall tariffs that have been imposed, and the breadth of the sectors and products involved, were designed to address both the CCP's policies and practices, and the impact on our economy, producers, and workforce," Thomas Conway, the international president of United Steelworkers and chair of LAC, wrote in the letter. "Too many U.S. companies have failed to take needed actions to address the threat posed by CCP policies. Many continue to outsource production, and research and development, undermining U.S. competitiveness and national security interests."

"Our government must act in the national interest to strengthen our economy for the future," said Conway.

Handfield explained some tariffs do support certain industries, such as tariffs on steel.

"If tariffs are high on Chinese steel, it protects American steel manufacturers and allows them to make higher profits and higher volume, and that provides jobs," he said. "Steel prices are very high, they're happy with that situation."

Politicians on both sides of the aisle have called for the tariffs to remain. On top of Republican senators Rob Portman and Sherrod Brown from Ohio and Mitt Romney from Utah, Democratic Sen. Elizabeth Warren from Massachusetts also opposed lifting tariffs.

"Removing the tariffs would likely result in some political pushback domestically and I imagine that Republicans would say that this shows the Biden administration is weak on China or is giving a free pass to China," said Sacks, of the Council on Foreign Relations. "But I think on the merits, the tariffs should be removed."

Besides the Ukraine war and the pandemic, Handfield said the core problem with skyrocketing inflation lies with supply chain infrastructure. The pandemic revealed weaknesses in the global supply chain flow, which caused the biggest U.S. ports -- Los Angeles and Long Beach, California -- to jam.

"I don't think there's anything that can be done in the short term by the government," said Handfield. "Some of the things they're doing are increasing interest rates, which could lower demand for some goods, but global supply chains have a lot of bottlenecks, they're many reasons for that [but] it has nothing to do with government policy."

"I think it's going to take at least two years for them to become effectively flowing again," he added.