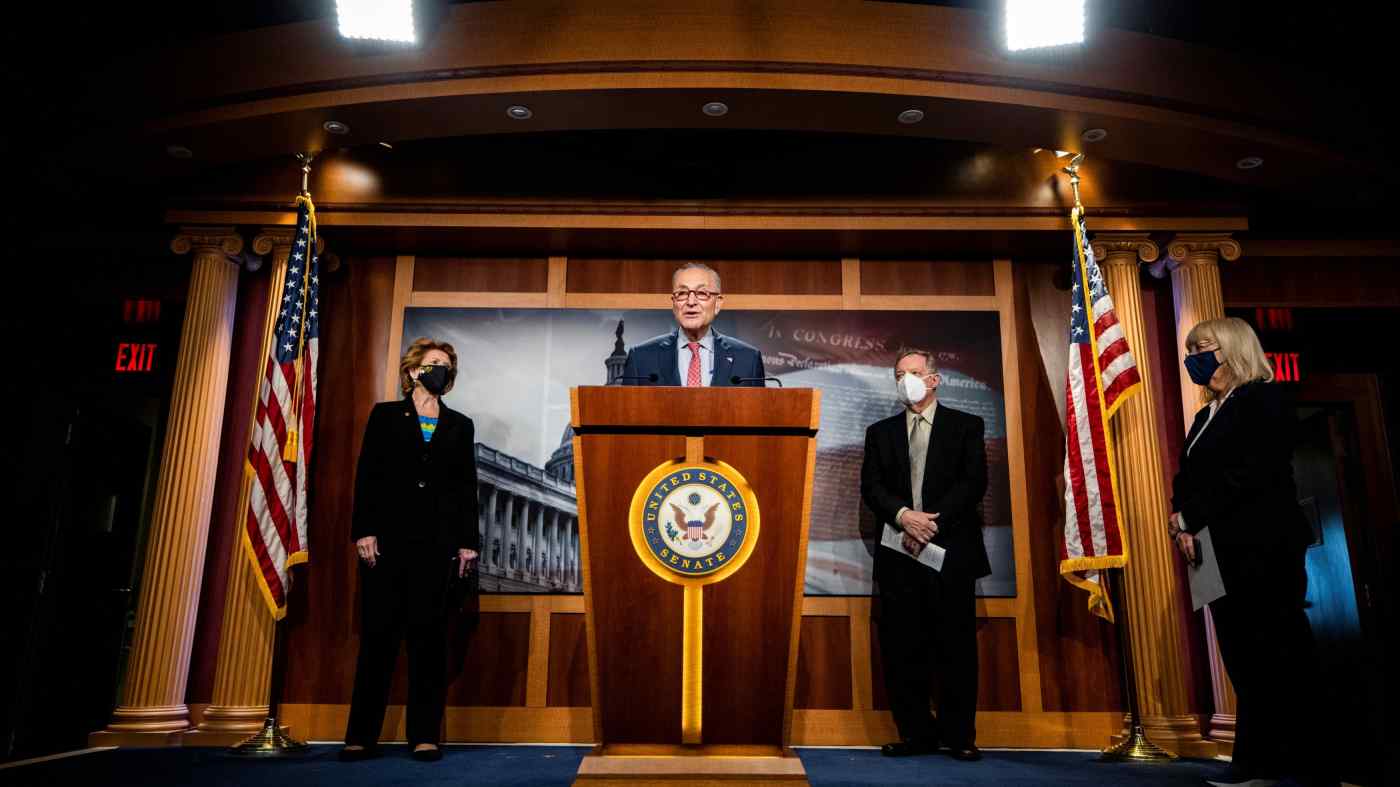 NEW YORK -- Fresh from injecting $1.9 trillion into the U.S. economy, Capitol Hill already envisions another big spending plan -- this time to gain the upper hand in the tech race against China.

Senate Majority Leader Chuck Schumer looks to fast-track the Endless Frontier Act, a bipartisan bill that would authorize $100 billion over five years to fund research in cutting-edge fields amid the U.S. rivalry with China.

The Senate's top Democrat told reporters last month he had directed relevant Senate committees to start drafting a legislative package that will make American investments in key industries "so we will outcompete China in all of them." The Endless Frontier Act, which Schumer co-introduced last year with Republican Sen. Todd Young and others in both houses of Congress, will be its centerpiece.

The recent global chip crunch, which highlights vulnerabilities in critical U.S. supply chains, has prompted Schumer and his colleagues to add a semiconductor emergency funding plan to the legislation. The chip shortage also provides greater impetus for the spending plan.

"Our intention is to put this legislation on the Senate floor for a vote this spring," Schumer said. President Joe Biden and Vice President Kamala Harris meet with Democratic senators on Feb. 3 in the Oval Office. (Courtesy of the White House)

The legislation would establish a technology directorate at the National Science Foundation -- the federal agency in charge of supporting fundamental research -- to fund study in these fields. The directorate might look to increase research spending at universities in these technology areas, create focused research centers and boost funding for collaboration with U.S. allies.

Though the bill also promises to create regional tech hubs with additional funding, its main concern lies in providing federal support for basic research to lay the groundwork for key technologies of the future, as Washington looks to play the long game in its contest with Beijing.

"The aim here is to establish an entity with the clear responsibility to look broadly at the competitiveness needs of the nation," Massachusetts Institute of Technology President L. Rafael Reif wrote in a September article backing the bill.

The scientific research system in the U.S. is not currently configured and funded to meet the challenge posed by China, argued the head of one of America's most revered research institutions.

It is unfortunate that policymakers "have tended to focus more on how to weaken China than on how to strengthen the United States," Reif wrote in the article, titled "To compete with China, America needs the Endless Frontier Act." The ambitious legislative package reflects a broader rethink in Washington about what it takes to retain American dominance in tech when faced with China's state-orchestrated economic model and aggressive industrial policy, exemplified by Beijing's "Made in China 2025" strategy.

Many in Congress and Joe Biden's White House have concluded that the U.S. needs an industrial policy of its own.

One good reason is that "others are doing it, especially the United States' competitors," the two wrote, referencing Made in China 2025. "U.S. firms will continue to lose ground in the competition with Chinese companies if Washington continues to rely so heavily on private sector research and development."

Tarun Chhabra, who leads the National Security Council's technology and national security directorate, also has made a case for government spending in technology in the past.

"Although the private sector in the United States remains one of the most innovative in the world, government spending is critical to support promising but unproven technologies with unclear commercial applications," Chhabra and two co-authors wrote last year in a Foreign Affairs article titled "The Left should play the China card."

The challenge from China's state-led economy and booming tech sector has pushed Washington to reconsider its more laissez-faire approach.

U.S. Trade Representative Katherine Tai said at her Senate confirmation hearing last month that the American system traditionally has "been very trusting of the free market of the invisible hand that Adam Smith described in terms of the market forces taking care of our economy and global competition."

"And I think that what the most recent years [have] taught us is that we need to revisit how we conduct our economic activity ... not to become China, but how to be true to ourselves and our traditions and be more strategic, knowing the quantity and the strategy and ambition that we are up against," she testified. Katherine Tai received a rare unanimous approval by the Senate to be U.S. Trade Representative.    © Reuters

The idea of more federal involvement in U.S. economic activity and innovation naturally prompts skepticism from fiscal conservatives who have more faith in the free market than in the government's competence.

"The history of such efforts in advanced capitalist economies gives ample reason for skepticism about the effectiveness of such top-down government planning," Jim Pethokoukis, a Dewitt Wallace Fellow at the right-leaning American Enterprise Institute, argued in January, citing Japan's economic stagnation and France's failed attempt to create a thriving tech sector.

"And what do even the smartest plans look like when filtered through the dodgy quality of American governance? Maybe as an excuse for cronyism and protectionism," Pethokoukis wrote in an AEI blog post.

But some in the Republican Party openly advocate for an American industrial policy, including noted China hawk Sen. Marco Rubio, otherwise a loud critic of the Biden administration.

"American policymakers must pursue policies that make our economy more productive by identifying the critical value of specific industrial sectors and spurring investment in them," Rubio said in an address to National Defense University students back in December 2019, calling for "a 21st-century pro-American industrial policy."

"What I am calling for us to do is remember that from World War II to the Space Race and beyond, a capitalist America has always relied on public-private collaboration to further our national security," said Rubio, the son of Cuban immigrants and outspoken foe of communism.

In the long run, the U.S.-China contest "is a competition that market fundamentalists won't win," he warned.