US and China dig in heels ahead of Alaska meetup 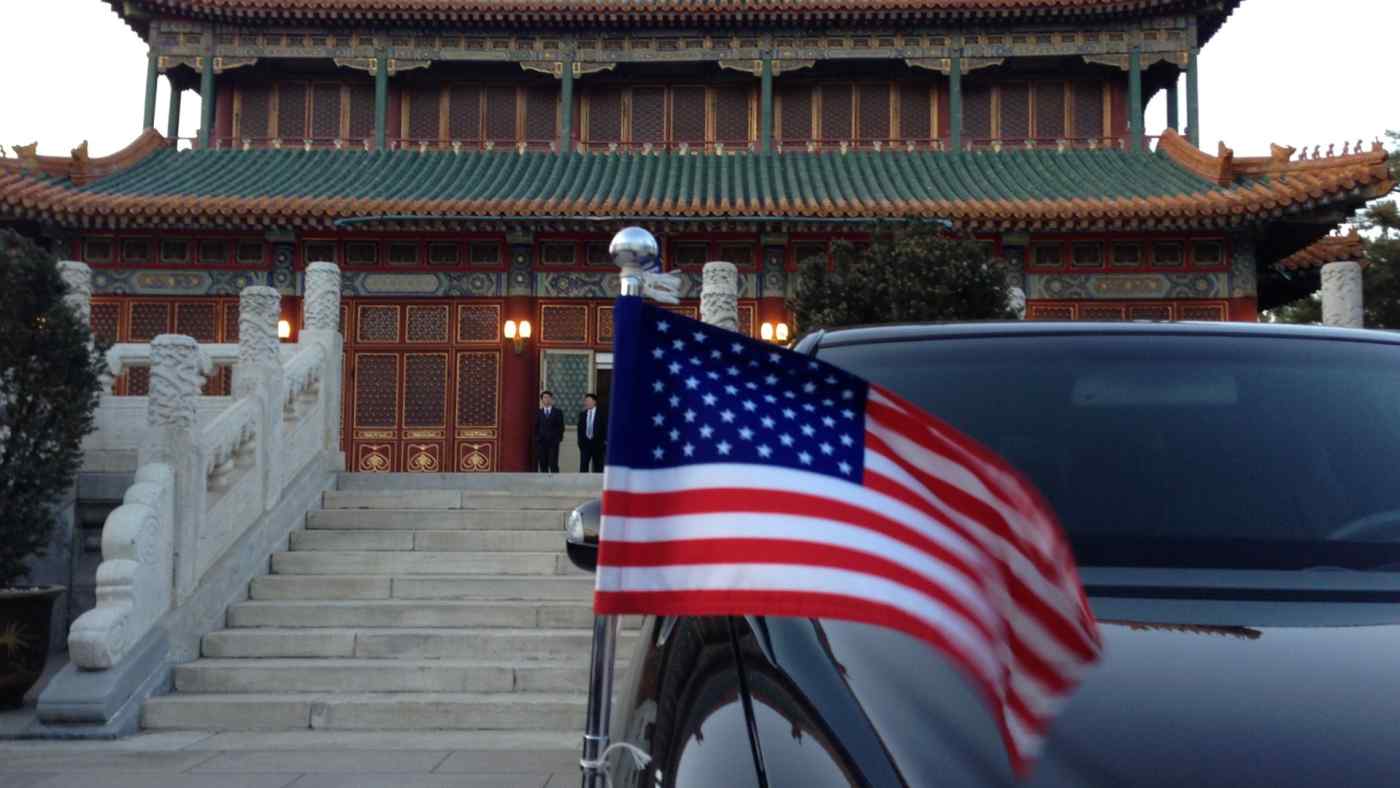 The American flag flutters outside the Purple Light Pavilion in Beijing. China and the U.S. do not seem headed for a reset in relations anytime soon in the Biden era. (Photo courtesy of the State Department)
TSUKASA HADANO and MASAYA KATO, Nikkei staff writersMarch 17, 2021 06:54 JST | China
CopyCopied

BEIJING/TOKYO -- Ahead of the first face-to-face, or mask-to-mask, engagement between the Biden administration and China in Anchorage, Alaska, on Thursday, each side still seeks to impose its own framing.

On Tuesday, as U.S. Secretary of State Antony Blinken and Defense Secretary Lloyd Austin talked with their Japanese counterparts in Tokyo at a "two-plus-two" meeting focusing heavily on "China's behavior" in the region, Chinese Foreign Ministry spokesperson Zhao Lijian signaled to reporters that Beijing hopes the Alaska meeting will be an opportunity to get bilateral relations back on the right track.

"China and the U.S. will hold a high-level strategic dialogue in the coming days. The two sides are still in discussion on the specific agenda," Zhao said in the regular news briefing. "We hope that building on the spirit of the phone conversation of the two heads of state on the eve of the Chinese Lunar New Year, the two sides can have candid talks on issues of common concern."

In a two-hour telephone conversation between U.S. President Joe Biden and Chinese President Xi Jinping last month, the new American leader "underscored his fundamental concerns about Beijing's coercive and unfair economic practices, crackdown in Hong Kong, human rights abuses in Xinjiang, and increasingly assertive actions in the region, including toward Taiwan," according to a White House readout.

But a Xinhua News Agency report of the call said Biden noted that the U.S. is "prepared to have candid and constructive dialogue with the Chinese side ... to improve mutual understanding and avoid miscommunication and miscalculation." This is likely what Zhao was referring to.

Yet signals coming out from the U.S. side point to a meeting where the two countries do not see eye to eye.

"We have made clear that the U.S. is not prepared to improve relations in a bilateral and separate context at the same time that a close and dear ally is being subjected to a form of economic coercion," Campbell told The Sydney Morning Herald and The Age.

"It's just not going to happen," Campbell said. Relations between Canberra and Beijing have worsened greatly since Prime Minister Scott Morrison called for an international investigation into the origins of COVID-19, a move China took as thinly veiled criticism of its handling of the virus first detected in Wuhan. China has slapped tariffs on Australian goods and halted imports of various products.

"This matter has been raised in every meeting [with Chinese officials] and it will be underscored in interactions in Anchorage later this week," Campbell said.

Asked about this statement, the Chinese Foreign Ministry's Zhao told reporters that "the root cause of the current difficulties in bilateral relations is Australia's wrong words and deeds on issues concerning China's sovereignty, security and development interests, which have undermined the foundation of mutual trust and cooperation between the two countries."

"The Australian side knows the ins and outs better than anyone else," he said.

Beijing had initially hoped for an opportunity to ease tensions with the U.S. under the Biden administration, but Washington's approach is proving unexpectedly difficult to read.

The Foreign Ministry's description of the upcoming meeting as a "strategic dialogue" has been flatly rejected by the American side, with Blinken telling a congressional hearing last week that it is not meant as a jumping-off point for a series of engagements.

"This is not a strategic dialogue," he said. "There's no intent at this point for a series of follow-on engagements. Those engagements, if they are to follow, really have to be based on the proposition that we're seeing tangible progress and tangible outcomes on the issues of concern to us with China."

Beijing's continued use of "strategic dialogue," even after being directly contradicted by Washington, reflects the Chinese side's uneasiness about the lack of a framework for ongoing bilateral talks.

Meanwhile, by having Blinken and Austin make Tokyo their first overseas destination and by inviting Japanese Prime Minister Yoshihide Suga to the White House in April as the first foreign leader Biden meets with in person, the administration is making clear that it sees Japan as an important ally for its Indo-Pacific blueprint.

The joint statement issued after Tuesday's two-plus-two meeting said the U.S. and Japan "acknowledged that China's behavior, where inconsistent with the existing international order, presents political, economic, military, and technological challenges to the alliance and to the international community."

Joint statements from the previous four two-plus-two meetings were careful not to condemn China outright. The last one to come close was in 2013, when it gently said the ministers "encourage China to play a responsible and constructive role in regional stability and prosperity" and "to adhere to international norms of behavior," among other things.

Tuesday's statement underscores the shift in Washington's view of Beijing over the past eight years.

According to a senior Japanese government official, it was Indo-Pacific coordinator Campbell who lobbied the White House to choose Suga as the first foreign leader Biden meets with face to face.

Putting Japan at the top of the list is a sign of Washington's hopes for the relationship. The Biden administration envisions a broader role for Japan in multiple aspects of its China strategy, including hosting midrange missiles as part of the Pentagon's Pacific Deterrence Initiative and helping to build supply chains that are less reliant on China.

China's Zhao took a jab at the two-plus-two in Tuesday's briefing, saying: "We believe that exchanges and cooperation between the U.S. and Japan should help regional countries enhance mutual understanding and trust, strengthen solidarity and cooperation, and uphold peace and stability in the Asia-Pacific. Their interactions shall not target a third party or hurt the interests of a third party."

In February, Chinese coast guard ships entered the territorial waters around the Senkaku Islands on a total of six days, the most in a single month since August 2016.

"That is a sign that the Chinese government is deeply upset about the Suga administration's strengthening of military cooperation with the U.S. against China," said Shi Yinhong, director of the American Studies Institute at Renmin University of China.

Yoko Takeda, head of the Research Center for Policy and Economy at the Mitsubishi Research Institute, said that while the U.S. and Japan reaffirming their alliance adds to the stability of the international order and is favorable for economic activity, the reality is that many Japanese companies are reliant on the Chinese economy.

"Japanese exports and manufacturing are recovering from the pandemic-induced slump as a result of the Chinese economy," Takeda said. "Items such as chipmaking equipment, which the Japanese are known for, are especially reliant on exports to China. Japan needs to leave space for cooperation with China."

"Until now, U.S.-China tensions were mostly seen through the lens of politics, foreign affairs and national security," she said. "But now it is about to heavily impact the economy and corporate earnings. Japanese companies are at a stage where they have to factor national strategy and national security into their calculations."