Washington encourages domestic production as rivalry with China heats up

WASHINGTON -- U.S. lawmakers are mulling subsidies of about $25 billion to encourage companies to relocate chip production facilities back home amid rising competition with China in the high-tech sector.

It is uncommon for the U.S. to pour big subsidies into any sector, stirring concerns that such direct support could distort the market. But Washington has been keen to protect its own industry on fears that too much outsourcing to China in the high-tech arena could eventually compromise its own national security and military capabilities.

U.S. semiconductor manufacturers controlled 47% of the global market in terms of sales in 2019, according to a report by the Information Technology and Innovation Foundation. It was followed by South Korean companies with 19% of the market and Japanese entities with 10%.

But U.S. consultancy Boston Consulting Group estimates that U.S. chipmakers only produce 12% of semiconductors used around the world. Most of them are fabless companies specializing in circuit designs, including Nvidia and Qualcomm, and these companies outsource production to factories in Taiwan and elsewhere.

China, by contrast, makes 15% of the chips used globally and is expected to grow to 24% in 10 years, potentially making the country the world's biggest supplier.

The U.S. is particularly keen to stop this growth and is including the subsidies in the budget for the 2021 fiscal year starting in October.

According to a draft bipartisan bill, the federal government will provide up to $3 billion in aid per investment project to semiconductor factories and research facilities. Building a semiconductor factory could cost up to $10 billion and the idea is to establish a $15 billion fund that will be managed over 10 years. 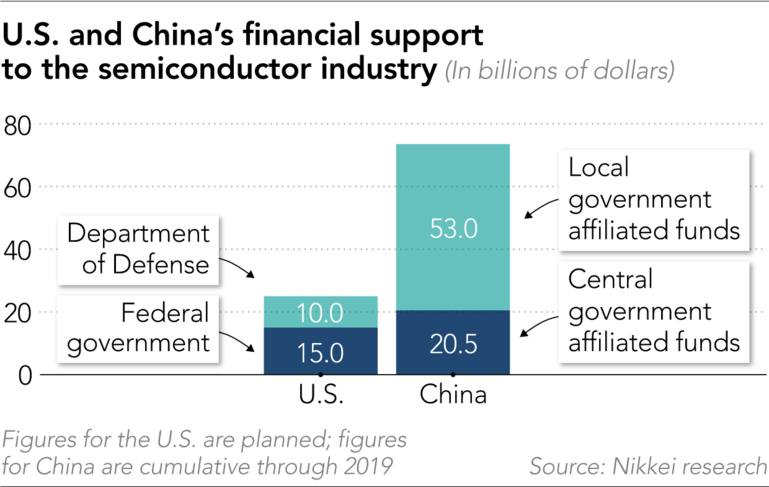 Congress is also considering providing funding to the Department of Defense. The department hopes to deploy $5 billion in manufacturing chips specifically for use in national security and another $5 billion for general research and development in the field. Asian chipmakers are rapidly catching up with U.S. companies in terms of miniaturization and other next-generation technologies.

In addition, state and municipal governments will also help chipmakers by offering tax breaks and other policy measures.

Such state support has long been in place in China, which wants to cut reliance on foreign chips. The state-owned China Integrated Circuit Industry Investment Fund, founded in 2014, had invested 140 billion yuan ($20.5 billion) as of 2019. Cumulative investments have topped 500 billion yuan, including funds from local governments. Beijing wants 70% of the chips used by the Chinese industry to be produced domestically by 2025.

Semiconductors are among the biggest export items from the U.S. and massive subsidies could violate World Trade Organization rules. But U.S. Congress sources said the subsidies would be made available for foreign companies too and hence, would not break WTO rules.

The draft refers to the creation of "a multilateral fund," which will back cutting-edge semiconductors jointly developed with Japan, the EU and other U.S. allies.