US ropes Australia into coalition to curb China's rise 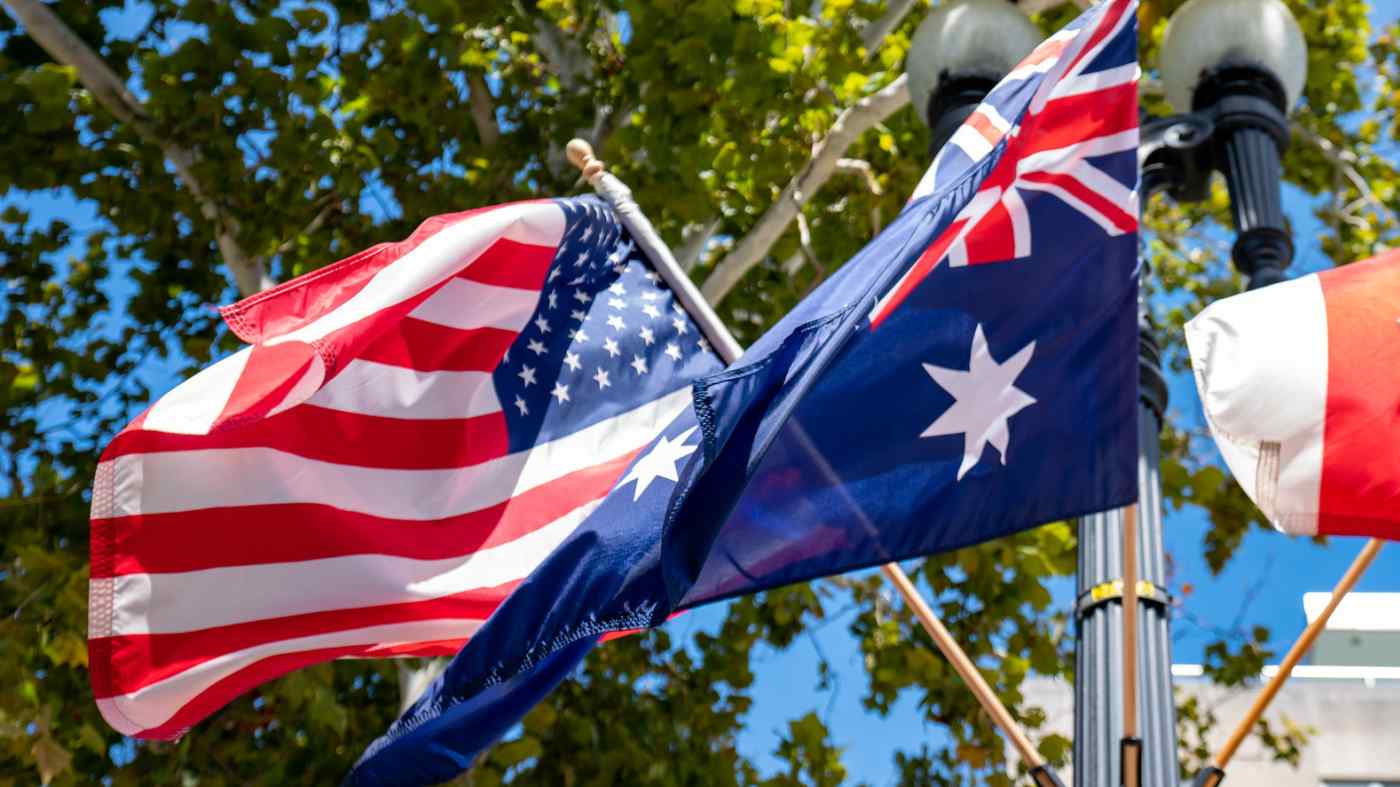 The flags of the U.S. and Australia are seen outside the U.S. Department of State in Washington, D.C. (Photo courtesy of the State Department)
TSUYOSHI NAGASAWA and FUMI MATSUMOTO, Nikkei staff writersJuly 29, 2020 16:47 JST | Australia
CopyCopied

WASHINGTON/SYDNEY -- The U.S. has embarked on a campaign to scout like-minded allies in the Asia-Pacific who oppose China's expansionist moves in the region -- starting with Australia.

In a show of the importance of the issue to both sides, Australia's foreign and defense ministers traveled to Washington this week to hold a "two plus two" meeting with their American counterparts. The trip marked a rare instance of multiple foreign cabinet members traveling to the U.S., a current hot spot of the coronavirus outbreak. The two ministers will undergo a two-week self-quarantine period after returning home.

The big question was how the U.S. and Australia should respond to China's increased activities in the Indo-Pacific region. Over the two-day meeting, the two sides discussed a wide range of issues that included cooperation in the South China Sea, cyber security, next-generation 5G mobile networks, COVID-19 and supply-chain diversification.

The U.S. sees Australia as a crucial partner in curbing China's aggressive policies. "The challenge of China demands exertion, energy from democracies - those in Europe, those in Africa, those in South America, and especially those in the Indo-Pacific region," U.S. Secretary of State Mike Pompeo said last week.

Pompeo has spent much of this month hammering home the Trump administration's hard-line stance toward China, saying earlier that Beijing's claims in the South China Sea were "completely unlawful." This signaled a shift from previous neutrality on the waters and comes as U.S.-China tensions continue to rise.

Australia has also stepped up its rhetoric against China. It echoed Pompeo's rejection of China's maritime claims in an open letter to United Nations Secretary-General Antonio Guterres on Thursday, urging "all claimants in the South China Sea, including China, to clarify their maritime claims and resolve their differences peacefully, in accordance with international law."

The U.S. and Australia are both also wary of Chinese-developed apps. Australian Prime Minister Scott Morrison said this month that he "won't be shy" about taking action against TikTok, which the U.S. is looking to potentially ban.

Australia's stance toward China started to change in April when Morrison called for an independent investigation on the origins of the novel coronavirus.

This led to elevated tensions between China and Australia, and greater vigilance regarding Beijing in Canberra. That hardened stance against China puts Australia closer to Great Britain, which has virtually aligned itself with the U.S.

Yet, Canberra is cautious not to burn all the bridges with Beijing. In Tuesday's "two plus two" press conference, Foreign Minister Marise Payne said "we have no intention of injuring" the relationship with China.

The U.S., meanwhile, is busy attempting to build a consensus against China among members of the Association of Southeast Asian Nations. George Sibley, the charge d'affaires of the U.S. Embassy in Myanmar, turned a critical eye against China's "crackdown on democracy" in a piece published July 18 in The Irrawaddy, a local newspaper.

"China aggressively cracked down on the independent, democratic spirit of Hong Kong, breaking a promise it made only 20 years ago," wrote Sibley. China "also continued its unprecedented campaign to undermine the sovereignty of ASEAN countries in the South China Sea," he added.

U.S. diplomats submitted similarly worded essays to newspapers in the Philippines and Vietnam, published on July 15 and 20 respectively. This activity coincides with Pompeo's policy to step up intervention in the South China Sea and counter Beijing, according to a senior U.S. government official.

But if countries fall in line with the U.S. and adopt sanctions and other measures against China, they risk retaliation from the world's second-largest economy. China already slapped Australia with restrictions on imports of Australian beef and barley.

ASEAN countries are highly dependent on China for trade. Cambodia, for example, counts on China for 27% of its trade in value in 2018. China accounts for a quarter of Laos's trade. The U.S. campaign against China is expected to resonate less in countries that have traditionally been friendly with Beijing.