TOKYO -- From July through September, the U.S. and China held consecutive military exercises in the South China Sea. While the world closely watched the heightened tensions, military experts were analyzing the nature of the dueling drills.

That is because a closer look at the training offered a window into understanding how both militaries intend to operate if a clash were truly to happen.

On the Chinese side, the theme was "distraction."

In the South China, East China and Yellow seas, as well as along the unmarked border between India and China, the People's Liberation Army mobilized forces simultaneously on four fronts.

This came while Beijing was engaged in a real-life standoff with India in the Himalayas.

The simultaneous training hinted at a passage in the Chinese military text book. In the early 1950s, when China annexed Tibet, it was against the backdrop of its intervention in the Korean War. The name of the game? Distraction.

Japanese security officials worry about the possibility of China drawing the world's attention to one region while quietly fulfilling strategic objectives elsewhere.

Meanwhile, while China was honing its skills at distraction, the U.S. was buying none of it. It sent the aircraft carrier groups of the USS Nimitz and USS Ronald Reagan into the heart of the South China Sea for the first major American military exercises there in eight years.

With a single carrier, an enemy strike that renders the flight deck unusable would leave fighter jets with nowhere to land. Adding a second showed that the U.S. was simulating tougher conditions similar to actual combat.

Washington's choice of the South China Sea for the drills is related to where China would deploy its last resort: nuclear-powered strategic submarines with submarine-launched ballistic missiles.

Hypothetically, if a nuclear conflict were to break out, Washington would hesitate to strike at China's heart as long as Beijing maintained this second-strike capability.

To protect this ultimate trump card, China has built artificial islands in the South China Sea and fortified their defenses with missiles and fighter jets.

But on the flip side, if the U.S. can neutralize the SLBMs, it can significantly weaken Beijing's position -- whether in wartime or peacetime. 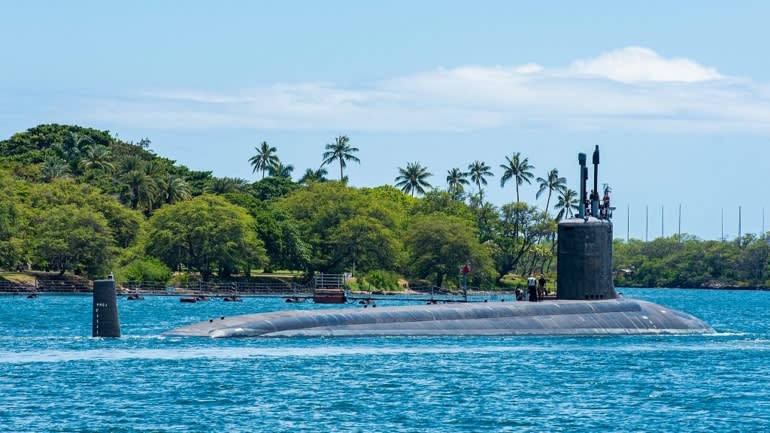 Based on the July drills, Washington's plan in such a scenario is to use carrier-based aircraft and other forces to destroy the artificial islands -- a stationary target -- leaving the Chinese submarines exposed. U.S. nuclear-powered attack submarines, two or so of which are typically deployed with each carrier, would then move in to deliver the finishing blow.

In mid-August, government-funded outlet Radio Free Asia posted on social media a satellite photo from an American company, appearing to show the entrance of a Chinese submarine base on the island of Hainan, a home port for the Chinese navy's submarine force. (RFA receives money from the U.S. Congress but says it maintains a firewall between its newsroom and the American government.)

A seemingly infuriated Beijing held military exercises again in the South China Sea in late August. It launched several missiles on Aug. 26, including at least one DF-26, an intermediate-range missile nicknamed the "Guam killer" that is said to be remarkably accurate, and a DF-21D.

But while the medium-range DF-21D has been dubbed the "carrier killer," questions remain about its accuracy. Should the U.S. wipe out China's SLBMs, then even if Beijing retaliated with a strike on Guam, American SLBM-equipped vessels would remain safe in waters that Chinese forces could not effectively reach.

This summer's dueling drills indicate that in strategic terms, the U.S. still has the edge -- at least for the time being.

But China is likely to continue shunning U.S.-Russia arms control negotiations while increasing production of nuclear weapons, ballistic missiles and naval vessels over the long term in a bid to bounce back.

This article was amended to clarify RFA's relationship with the US government.