US woos Taiwan and its chipmakers in step toward trade pact 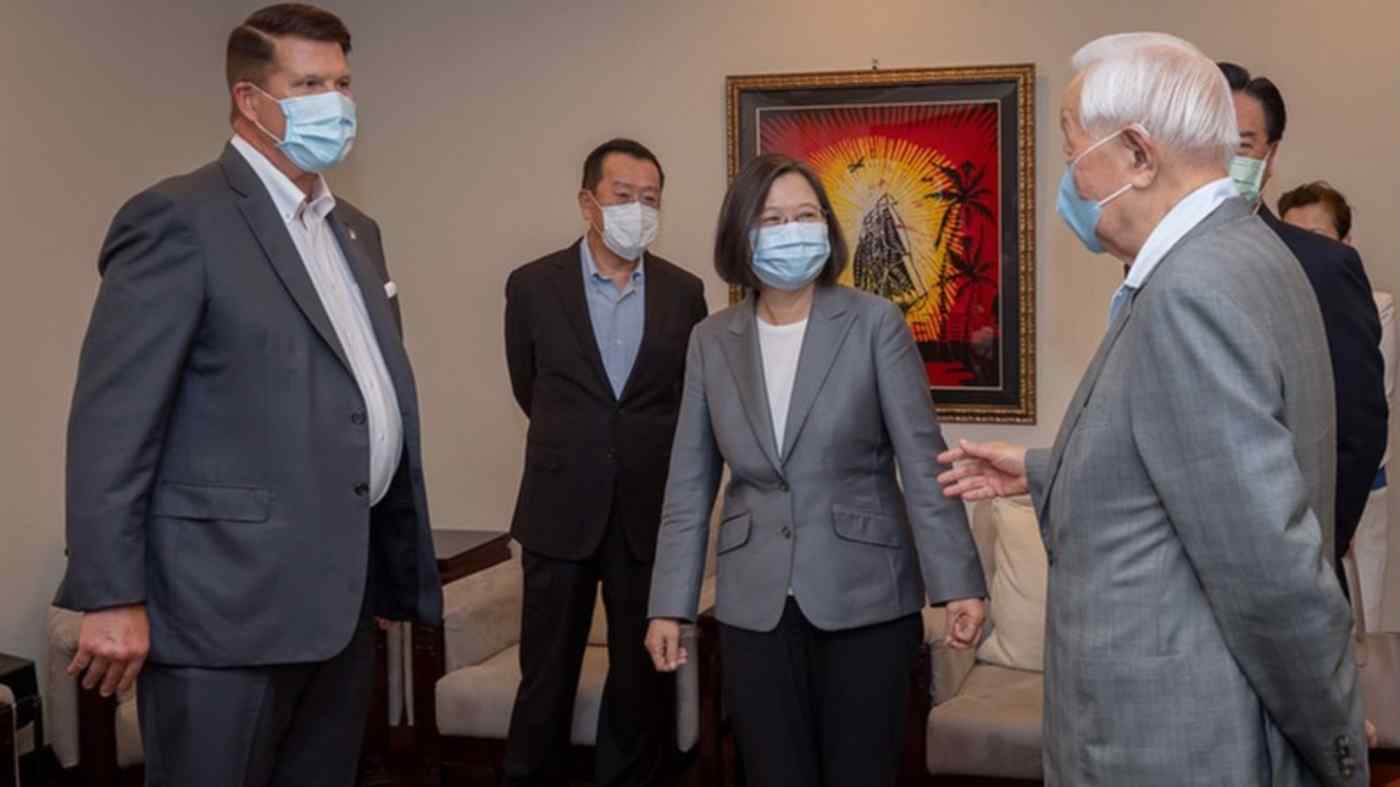 TAIPEI/WASHINGTON -- As tensions between the U.S. and China escalate, Washington has stepped up economic dialogue with Taiwan with an eye on the island's extensive semiconductor industry.

Keith Krach, undersecretary of state for economic growth, energy and the environment, met Friday with several senior Taiwanese officials, including Premier Su Tseng-chang and Economic Minister Wang Mei-hua. Krach arrived in Taiwan the day before over strong objections from Beijing.

The latest meetings are characterized as an exchange of views but will serve as the foundation for a new bilateral economic dialogue. The Taiwanese side apparently communicated strong interest in signing a free trade agreement with the U.S.

Taiwan has welcomed the trip by Krach, the highest-ranking U.S. State Department official to visit since Washington cut diplomatic ties with the island in 1979. In addition to meeting with representatives from Taiwanese companies, he attended a banquet hosted by Taiwanese President Tsai Ing-wen.

When meeting with the Taiwanese officials, Krach focused largely on measures designed to curb Chinese economic clout. He talked about how Washington and Taipei can work together to create new supply chains to curb their economic dependence on mainland China, as well as about Taiwan's semiconductor industry and the need for tighter restrictions on investments from the mainland.

Washington's overtures to Taiwan are fueled in part by strong U.S. interest in the island's chipmakers, which account for roughly 70% of the world's semiconductors produced on a contract basis. Many Taiwanese players, like Taiwan Semiconductor Manufacturing Co., can develop and produce cutting-edge products that play a critical role in 5G networks and military hardware.

This comes at a time of heightened tensions across the strait, with China sending 18 fighters and bombers over the sensitive midline between the mainland and Taiwan on Friday.

"A military strike on Taiwan by mainland China will not only be a blow to Taiwan and the U.S., but will shake up foundations around the world," said Su Tzu-yun of Taiwan's Institute for National Defense and Security Research.

Washington and Taipei have already begun laying the groundwork for greater cooperation. The U.S. government began negotiating with TSMC last year to persuade the foundry operator to expand its footprint in the U.S. TSMC decided in May to build its first advanced overseas fab in the U.S. instead of China. The $12 billion facility is expected to come online in 2024 with American government help.

Taiwanese companies also produce about 90% of the world's servers. American businesses are buying more products from Taiwan and elsewhere instead of mainland China, owing to security concerns. Hon Hai Precision Industry, or Foxconn, assembles around $40 billion in servers a year, with most of those made in Taiwan and Mexico to going to such U.S. companies as Amazon.com and Microsoft.

In 5G equipment, the U.S. has selected five Taiwanese companies for a whitelist of 31 trusted foreign telecommunications companies -- more than any other country or region.

The Trump administration has made its support for Taiwan clear. "We will continue to provide Taiwan defense articles and services to enable Taiwan to maintain a sufficient self-defense capability," said David Stilwell, assistant secretary of state for East Asian and Pacific affairs, in testimony submitted to the Senate for Thursday. Washington is poised to make a $7 billion arms sale to Taiwan, including cruise missiles, The Wall Street Journal reported this week.

These moves have not been received well by Beijing. Chinese Foreign Ministry spokesperson Wang Wenbin on Thursday urged the U.S. to "immediately stop official exchange with Taiwan." The Chinese Defense Ministry, which announced the start of drills around the Taiwan Strait on Friday, slammed the U.S. and Taiwan for frequently stirring up trouble in the region.