SEOUL -- South Korea and the U.S. have ignored threats from North Korea and will push ahead with joint military drills next week.

The exercises will consist mostly of computerized simulations with no live field training due to the COVID-19 pandemic. The scale of the drills will also be adjusted in consideration of inter-Korean relations, South Korea's ruling Democratic Party said this week.

The joint operations reflect wider moves to shore up U.S. international military alliances, after tensions grew over former President Donald Trump's demands for partner countries to contribute more. In March, more than a month after Trump left office, South Korea agreed to pay almost 14% more toward the costs of the 28,500 American troops stationed there.

Forces from the two allies this week began preliminary crisis management training that will wrap up on Friday. The main exercises that start on Monday are scheduled to run through Aug. 26.

The U.S. State Department said Wednesday that the joint exercises are purely defensive in nature as Washington harbors no hostile intention toward Pyongyang.

"We remain committed to the security of the Republic of Korea and our defined, combined defense posture in accordance with the ironclad alliance we have with the ROK," Ned Price, department spokesperson, said in a briefing.

North Korea reacted angrily, calling the drills as a "rehearsal" of a war against the isolated country. Kim Yong Chol, head of the North's South Korean policy, said Wednesday that "the South Korean authorities began to go mad as it commits to a war exercise again."

"South Korea and the U.S. chose confrontation with our country as usual. So, it has become clear that we have no other options," Kim said in a statement.

Kim Yo Jong, sister of leader Kim Jong Un, complained in a statement on Tuesday about South Korea's "betrayal."

"The United States and South Korea will face a more serious security threat by ignoring our repeated warnings to push ahead with the dangerous war exercises," she said. The drills are an "unwelcome, self-destructive action" that threaten the North Korean people and raise tensions on the Korean Peninsula.

On a military level, tensions have eased since North Korea conducted three nuclear tests in 2016 and 2017 -- a period that also saw a flurry of missile launches including intercontinental ballistic missiles with the potential to hit the continental U.S.

But Pyongyang launched a brace of short-range ballistic missiles in March, and over the past few years has conducted tests at the Yongbyon nuclear complex recently, according to a draft U.N. report obtained by Nikkei. 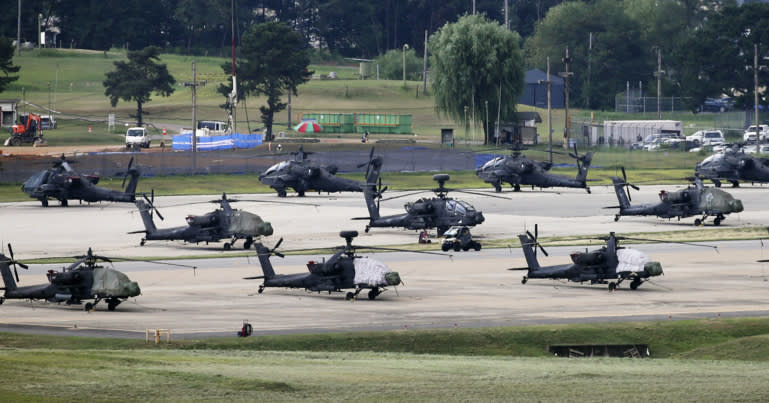 Helicopters are seen at Camp Humphreys in South Korea on Wednesday, ahead of joint military drills with the U.S. next week.   © Yonhap/Kyodo

China is also weighing in on the exercises.

Foreign Minister Wang Yi expressed his opposition to drills at last week's foreign ministerial meeting of the ASEAN Regional Forum, one of the few international security dialogue frameworks in which North Korea participates.

The exercises "fall short of a constructive move under the current circumstances," the official Xinhua News Agency quoted Wang as saying.

Analysts say that Seoul and Washington made the right decision as there will be opportunities for talks with North Korea later.

"If the South Korean government's COVID-19 vaccination plan goes smoothly, Seoul may have the capacity to supply vaccines to North Korea next year," said Cheong Seong-chang, senior research fellow at the Sejong Institute.

"It won't be too late for the South Korean government to seek cooperation with the North then," he said. "It is good to pursue denuclearization on the Korean Peninsula with a long-term perspective rather than being driven by North Korea's messages."

The drills also come as North Korea suffers an economic crisis amid the pandemic.

South Korea's central bank estimated last month that the North Korean economy shrank 4.5% in 2020 from a year ago, marking the deepest plunge in 23 years. This is largely due to the country's fall in trade due to closed borders -- exports plunged 67.9% to $90 million from the previous year, and imports tumbled 73.9% to $770 million.