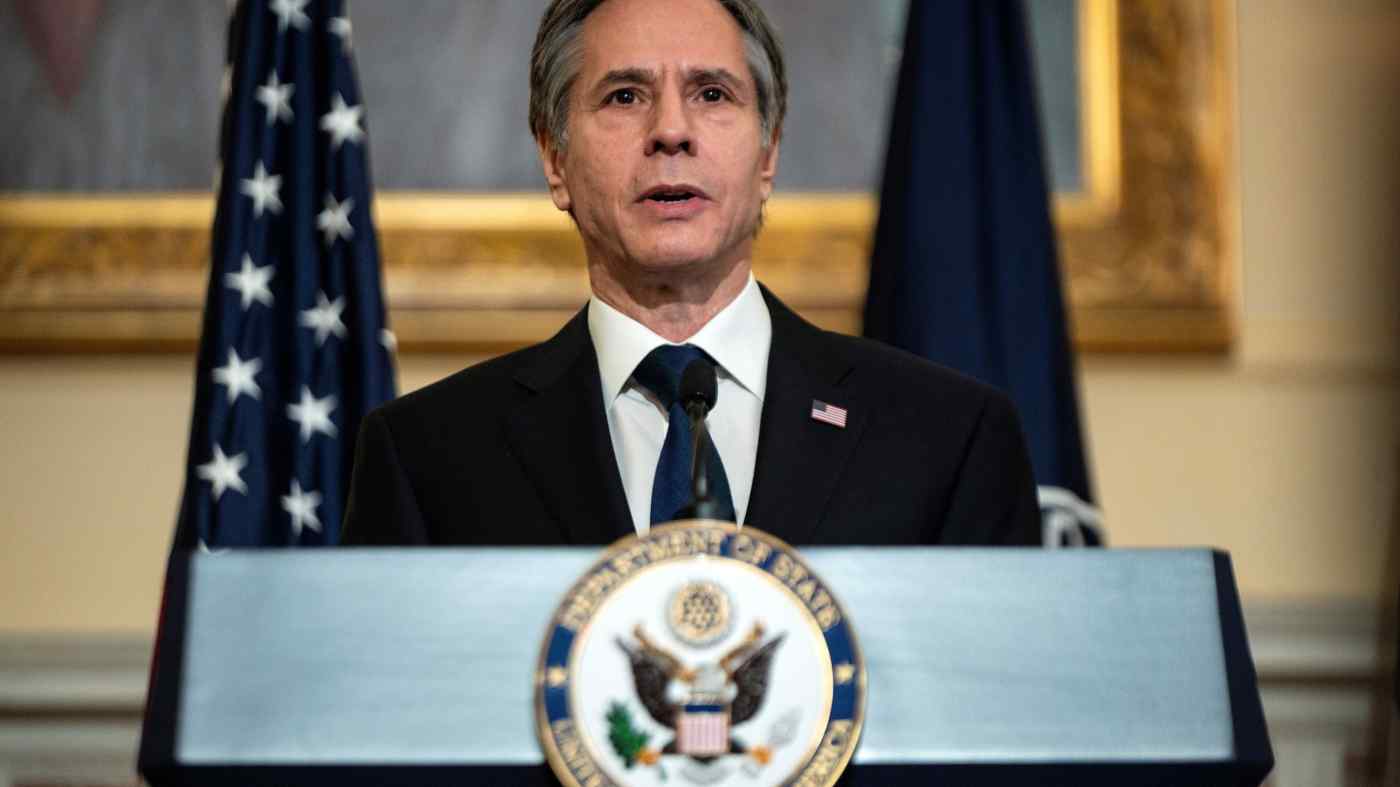 U.S. Secretary of State Antony Blinken. A meeting would be significant now that Biden has adopted a tough stance toward China and signaled he would hold it to account for "abuses."   © Reuters
March 10, 2021 17:08 JST | North America
CopyCopied

WASHINGTON (Financial Times) -- Washington and Beijing are hammering out the details of the first high-level meeting between the rival powers since President Joe Biden took office, according to four people familiar with the talks.

The negotiations could lead to Secretary of State Antony Blinken and National Security Adviser Jake Sullivan meeting their Chinese counterparts.

One option would involve Blinken and Sullivan talking to Foreign Minister Wang Yi and top foreign policy official Yang Jiechi in Alaska, according to two of the people.

The U.S. state is being eyed as a possible location because Blinken could return to Washington via Anchorage from his upcoming trip to Japan and South Korea. The U.S. is also considering options that would involve only one of the two officials meeting their Chinese counterpart.

One person familiar with the situation stressed that the talks were continuing and that no decision had been made about timing or location.

Any meeting would be a significant development after Biden adopted a tough stance toward China and signaled that he would hold it to account for "abuses." These include China's repression of Muslim Uighurs in Xinjiang, which the U.S. has called "genocide," the crackdown on the pro-democracy movement in Hong Kong and assertive actions toward Taiwan.

Biden raised these issues in his first call with President Xi Jinping, even though Yang had warned the U.S. not to cross such "red lines." Sullivan has also said the U.S. would impose costs for any egregious behavior. In his first call with Yang, Blinken said Washington would hold Beijing "accountable for its abuses of the international system."

If Sullivan and Blinken meet Yang and Wang, it would be the first time a U.S. national security adviser and secretary of state met jointly with Chinese officials. The White House and state department did not comment. The South China Morning Post first reported that the two sides were in talks.

The decision to embrace a meeting with China came as Biden prepared to convene a summit with the other members of the Quad -- Japan, India and Australia -- on Friday. The four nations are trying to work together more closely to counter China but without creating an overtly anti-Beijing partnership.

Blinken and Defense Secretary Lloyd Austin are preparing to visit Tokyo and Seoul next week. Austin will also visit India.

Two people familiar with the situation said Washington wanted to ensure it was not sidelining China completely while it urged allies to work with the U.S. to adopt a tougher stance toward Beijing.

Wang said on Sunday that China was willing to engage with the Biden administration but urged the U.S. to "move in the same direction and remove all its unreasonable restrictions on bilateral cooperation."

Wang Huiyao, president of the Center for China and Globalization think tank in Beijing, said a meeting would be "the first step on a thousand-mile journey" as China tries to convince the U.S. to shelve disputes over human rights in favor of areas of potential cooperation, such as climate change.

"China has come to accept that the U.S. perceives itself to be in competition with China," he said. "China this time is not trying to dodge that."

U.S. officials, however, have said they will not ease up their criticism. Washington is debating how to respond when Beijing passes a sweeping election law this week that would effectively crush any hopes of Hong Kong becoming a more democratic territory.

Admiral Philip Davidson, head of the U.S. Indo-Pacific command, said on Tuesday the U.S. military was losing its edge as China continued to erode decades of U.S.-led deterrence in Asia with a rapid military expansion.

"We are accumulating risk that may embolden China to unilaterally change the status quo before our forces may be able to deliver an effective response," Davidson told the Senate armed services panel.