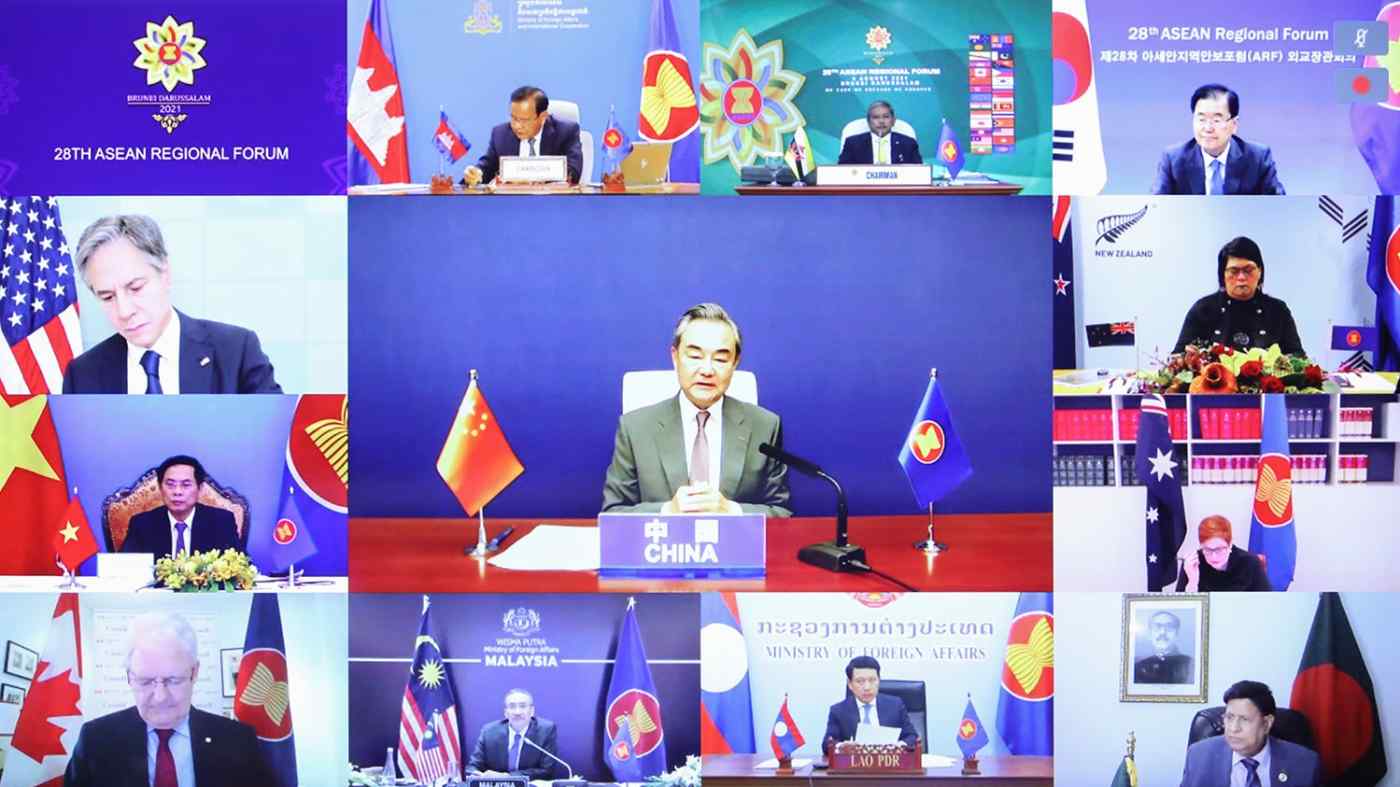 WASHINGTON/TOKYO (Kyodo) -- The U.S. and Japan expressed concerns over the situation in the South China Sea, where China has been aggressively pushing its territorial claims, and took up Beijing's nuclear arms issue during talks with ASEAN and partner nations on Friday.

Speaking at the foreign ministerial meeting of the ASEAN Regional Forum, one of the few international security dialogue frameworks in which North Korea participates, U.S. Secretary of State Antony Blinken joined other countries in calling for Pyongyang's denuclearization while urging ARF members to press Myanmar's junta to end its violence against the people, according to the State Department.

The meeting of the 27-member ARF, which also includes countries such as China and South Korea, was held as part of this week's series of virtual gatherings related to the Association of Southeast Asian Nations. Brunei is serving as ASEAN's chair this year.

Ongoing U.S.-China tensions cast a shadow over the event, with Blinken calling on Beijing to "cease its provocative behavior in the South China Sea" and raising "serious concerns" about its alleged human rights abuses against the Muslim Uyghur minority in the western Xinjiang region as well as in Hong Kong and Tibet.

The top U.S. diplomat also noted "deep concern" over the rapid growth of China's nuclear arsenal, saying it highlights how Beijing has "sharply deviated from its decades-old nuclear strategy based on minimum deterrence," according to the State Department.

Japanese Foreign Minister Toshimitsu Motegi told the meeting that he wants to encourage China, along with other countries, to fulfill the responsibilities of a nuclear-weapon state, touching on an agreement between the United States and Russia earlier this year to extend the last remaining treaty capping their nuclear arsenals.

He called for Beijing to "engage in bilateral dialogue with the United States on arms control," according to the Japanese Foreign Ministry.

Turning to the situation in the East and South China seas, Motegi stated that unilateral attempts to change the status quo by force are "continuing and intensifying" in the waters, in a veiled criticism of Beijing's assertiveness there.

"Japan strongly opposes this," Motegi was quoted as saying in the ministry's news release.

Beijing has frequently sent official vessels to waters around the Japanese-controlled Senkaku Islands in the East China Sea in an attempt to lay claim to them. It has also built artificial islands with military infrastructure in the South China Sea, claiming sovereignty over almost the entire maritime area.

China has conflicting territorial claims with four of the 10 ASEAN members -- Brunei, Malaysia, the Philippines and Vietnam -- as well as Taiwan in the South China Sea.

Chinese Foreign Minister Wang Yi said that "interference by countries outside the region constituted the biggest threat to peace and stability" in the South China Sea, and the abuse of "freedom of navigation" should be resisted by the nations in the region, according to China's Foreign Ministry.

U.S. warships have carried out freedom of navigation operations there in an apparent bid to counter Chinese claims and actions in the sea, a strategic waterway through which more than one-third of global trade passes.

On North Korea's nuclear issue, Motegi expressed Japan's "strong hope" for a resumption of dialogue between Washington and Pyongyang and emphasized that Japanese Prime Minister Yoshihide Suga remains willing to meet directly with North Korean leader Kim Jong Un without any preconditions, according to the Japanese ministry.

In response, participants pointed out the importance of the denuclearization of the Korean Peninsula and full implementation of U.N. Security Council resolutions aimed at curbing North Korea's nuclear and missile programs, the ministry said.

But Wang called for an easing of sanctions on North Korea to seek a breakthrough on the issue, and expressed his opposition to joint military drills expected to be held between the United States and South Korea later this month.

The exercises "fall short of a constructive move under the current circumstances," the official Xinhua News Agency quoted Wang as saying.

He also took a veiled swipe at the United States as it pursues engagement with Southeast Asian nations as a way to shore up international support to counter China's rise.

"There should be no more 'lecturers' or 'saviors.' The destiny of each country should lie in the hands of these countries themselves, and the future of the region should be jointly created by all countries in the region," Wang was quoted as saying.

On the current situation in Myanmar, Motegi voiced grave concerns and welcomed the appointment of Brunei's second foreign minister Erywan Yusof as special envoy to the country, tasked with facilitating dialogue between the military rulers and their opponents following the Feb. 1 coup.

Japan fully supports the envoy's activities and hopes they will lead to the start of a dialogue between the parties concerned and other developments in the near term, Motegi was quoted as saying.

According to a Southeast Asian country source, North Korea was represented by its ambassador to Indonesia rather than its foreign minister during the ARF meeting.