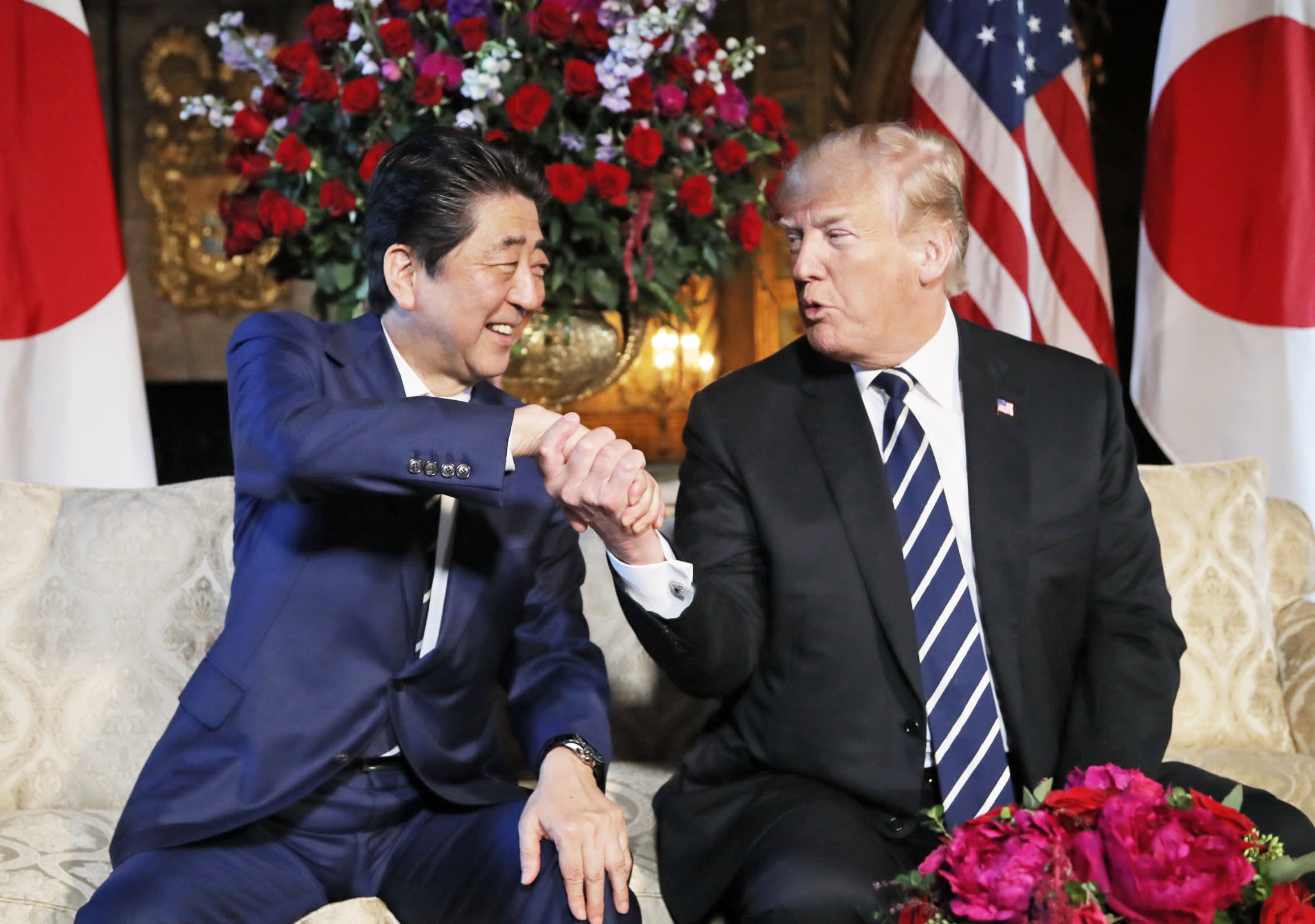 PALM BEACH, U.S. -- Washington and Tokyo reaffirmed on Tuesday that they will demand that North Korea eliminate its nuclear and missile capabilities, "completely, verifiably and irreversibly," as North Korean leader Kim Jong Un mounts a diplomatic effort to defend his regime.

"Japan and ourselves are locked and we are very unified on the subject of North Korea," said U.S. President Donald Trump before television cameras at the outset of a two-day summit meeting with Japanese Prime Minister Shinzo Abe.

The two leaders met for two hours at Trump's Mar-a-Lago estate in Florida, where they agreed to maintain "maximum pressure" on North Korea until it takes concrete steps toward "complete, verifiable and irreversible denuclearization," according to Japanese Deputy Chief Cabinet Secretary Yasutoshi Nishimura, who attended the meeting.

Trump, who plans to meet with Kim Jong Un by early June, told reporters that five locations are currently being considered for the meeting.

He also said the U.S. has had direct talks with North Korea at "extremely high levels," and that the world will know the location and timing of the summit "fairly soon."

The Washington Post reported Tuesday that Mike Pompeo, director of the Central Intelligence Agency and nominee for next U.S. Secretary of State, made a secret visit to North Korea over the weekend of March 31 and met with Kim.

Trump's tweet on Wednesday morning confirmed the visit. "Mike Pompeo met with Kim Jong Un in North Korea last week. Meeting went very smoothly and a good relationship was formed. Details of Summit are being worked out now. Denuclearization will be a great thing for World, but also for North Korea!" the president wrote.

While disclosing the progress made toward the meeting with North Korea's leader, the president's comments on Tuesday hinted that there was still a possibility that the meeting might not take place. "We'll see what happens. Because ultimately it's the end result that counts, not the fact that we're thinking about having a meeting."

"It's possible things won't go well and we won't have the meeting," he said, an apparent effort to nudge Kim toward taking concrete steps toward full denuclearization.

The current meeting is the sixth between Trump and Abe, who is visiting Mar-a-Lago for the second time. Abe is scheduled to play a round of golf with Trump on Wednesday, hoping to project an image of a strong alliance as Trump pursues a policy of putting U.S. national interests ahead of others -- including those of allies -- while security and economic challenges mount from China and North Korea.

Pyongyang has been accelerating its diplomatic offensive, agreeing to a summit with South Korea on April 27. A report in South Korean media has suggested the leaders of the two countries are set to announce a permanent end to the 65-year state of war that exists between them. They remain technically at war since signing a truce to end the 1950-1953 conflict.

Trump voiced his endorsement for the two countries' peace initiative. "South Korea is meeting, and has plans to meet, with North Korea to see if they can end the war. And they have my blessing on that," he said.

Trump also promised to take up the issue of Japanese citizens abducted by North Korea, an emotional issue for Japan, when he meets with Kim. Nishimura quoted Trump as telling Abe that the U.S. "will do its best for Japan" over North Korean issues as a whole.

In a reflection of the personal ties between the two leaders, Trump tweeted before the meeting: "Getting ready to meet Prime Minister Abe of Japan, a truly fine gentleman!"

But contentious issues exist between the two countries, especially over the chronic U.S. trade deficit.

Tokyo doesn't think trade needs to be balanced on a bilateral basis, and calls for freer trade through initiatives such as the Trans-Pacific Partnership, inviting Washington to return to the pact. But Washington seeks better bilateral trade deals with its major partners and has used the threat of retaliatory tariffs to win concessions.

"Japan is buying a tremendous amount of military equipment from the United States, which is good," Trump said. "And as you know, we're buying a lot of cars and a lot of other things from Japan. But we are each buying a lot. But we still have to talk about trade, and the prime minister understands that."

Larry Kudlow, Trump's chief economic adviser acknowledged: "We have certain disagreements with respect to some of the trading issues."

He also lowered expectations for Washington rejoining the TPP, a move Trump has recently signaled more than once, and which Japan would strongly welcome.

"We are in the pre-preliminary stages of any discussions," Kudlow said. "It's more of a thought than a policy," he said, adding that the U.S. would probably like to see a free-trade agreement with Japan "at some point."

Trump tweeted his doubts about the TPP late Tuesday, signaling an intention to pursue bilateral trade talks with Japan.

"Bilateral deals are far more efficient, profitable and better for OUR workers," he tweeted.