US and Pakistan mend ties as Washington seeks Afghanistan exit 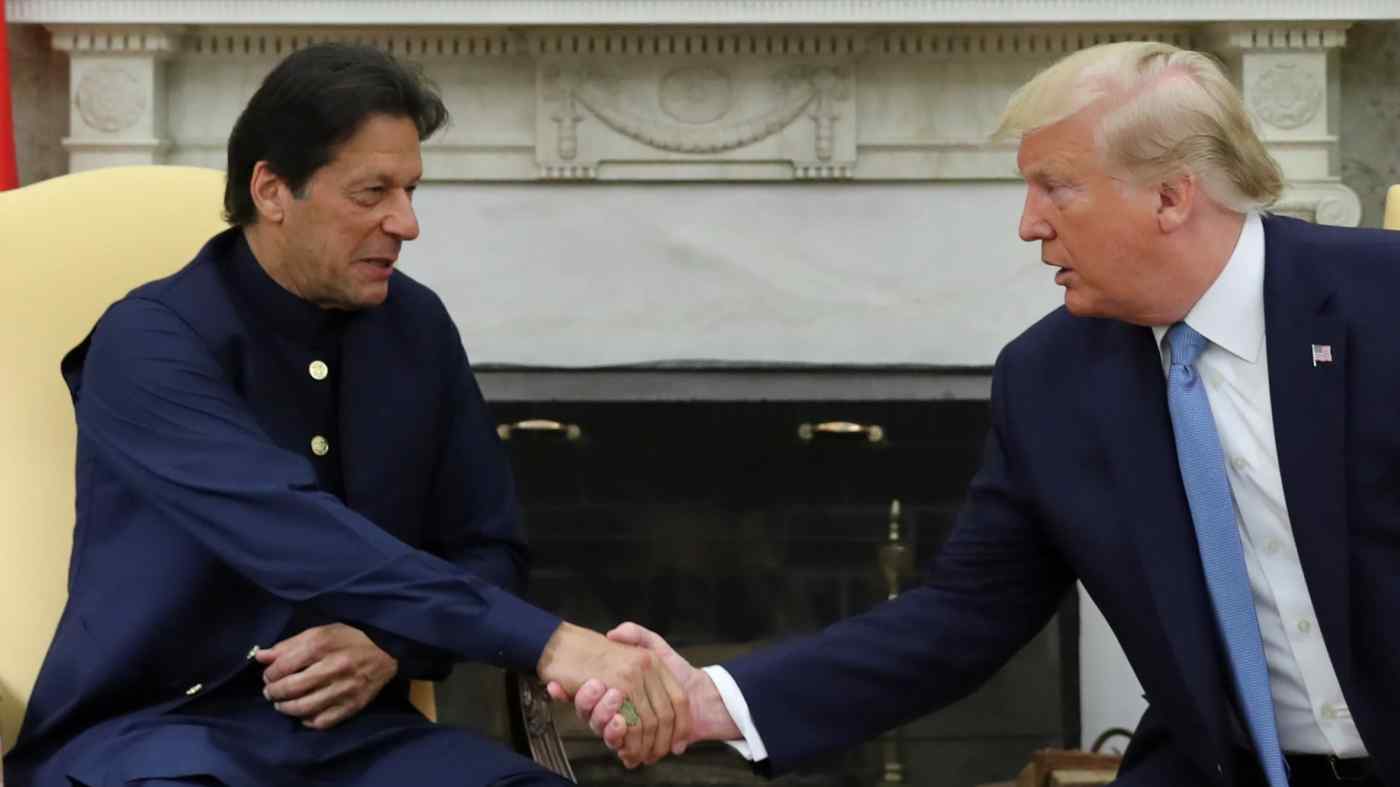 ISLAMABAD -- U.S. President Donald Trump and Pakistan's Prime Minister Imran Khan met at the White House on Monday for the first time amid promises of cooperation to facilitate a U.S. military withdrawal from Afghanistan.

The occasion also saw Trump offer to mediate the decadeslong dispute between India and Pakistan over the predominantly Muslim state of Kashmir.

The meeting came as Trump appears keen to withdraw American forces from Afghanistan -- the Central Asian country where the U.S. has fought the Taliban for almost two decades. The conflict, which began after the U.S. invaded Afghanistan following the 9/11 terrorist attacks of 2001, has become Washington's most expensive and longest running war in history.

"I could win that war in a week. I just don't want to kill millions of people," Trump told reporters during Khan's visit.

But a senior western diplomat in Islamabad said the U.S. has reconciled itself to exiting Afghanistan without a full military victory. "The Taliban have captured between 60 to 70 percent of Afghanistan," the diplomat told the Nikkei Asian Review on condition of anonymity. "In the past few months, the U.S. has recognized that reality and built up a partnership with Pakistan to lead to a peace settlement."

Khan used the White House meeting to repeat his view that there was no military solution to the war.

Analysts said Monday's meeting could help Pakistan revive global confidence in its weak economy after the country was forced to obtain a $6 billion loan in early July from the International Monetary Fund.

"It appeared that both [Trump and Khan] showed a very good chemistry," said Ali Sarwar Naqvi, a former Pakistani diplomat considered an expert on U.S.-Pakistan relations. "Trump is known to be a generous leader."

Despite the warmth the two leaders displayed, other analysts think that building cooperation between their two countries could take time.

Pakistani officials have said Washington owes Islamabad $1.3 billion for having battled hard-core militants along the country's border with Afghanistan. Additionally, the U.S. has yet to deliver advanced helicopters promised under an agreement signed by Pakistan in 2015 for the purchase of twelve attack helicopters.

Hasan Askari Rizvi, a Pakistani commentator on security affairs, told Nikkei that renewed cooperation between the U.S. and Pakistan "may take some time to materialize." Rizvi said Monday's meeting represented the first step, but that "now it's up to Pakistan and the U.S. to get down to details and work out areas for cooperation."

But a senior Pakistani government official, who also spoke to Nikkei on condition of anonymity, said the Trump administration wants to move fast on Afghanistan because the 2020 U.S. presidential elections are fast approaching. "President Trump clearly wants to highlight the U.S. exit from Afghanistan as a major success story when he goes out to campaign," he said.

In an unexpected gesture during Monday's meeting, Trump offered to mediate a resolution to the Kashmir dispute between India and Pakistan. "It's a terrible situation [that has] been going on for many years," the president said, referring to conditions in the predominantly Muslim state.

Pakistan and India have conflicting territorial claims in the mountainous region, while a portion of it is controlled by China.

Trump said that Indian Prime Minister Narendra Modi had asked him to mediate on the issue, but on Tuesday, the country's foreign affairs minister, Subrahmanyan Jaishankar, denied it.

India has thus far refused outside offers of mediation on the grounds that Kashmir is a domestic issue. But analysts believe the only way to settle the dispute is for India and Pakistan to accept mediation by a third party. "Unless both India and Pakistan sign on to this offer, you can't expect progress over Kashmir," Trump added.