India urged to shift farther away from Russian hardware for interoperability 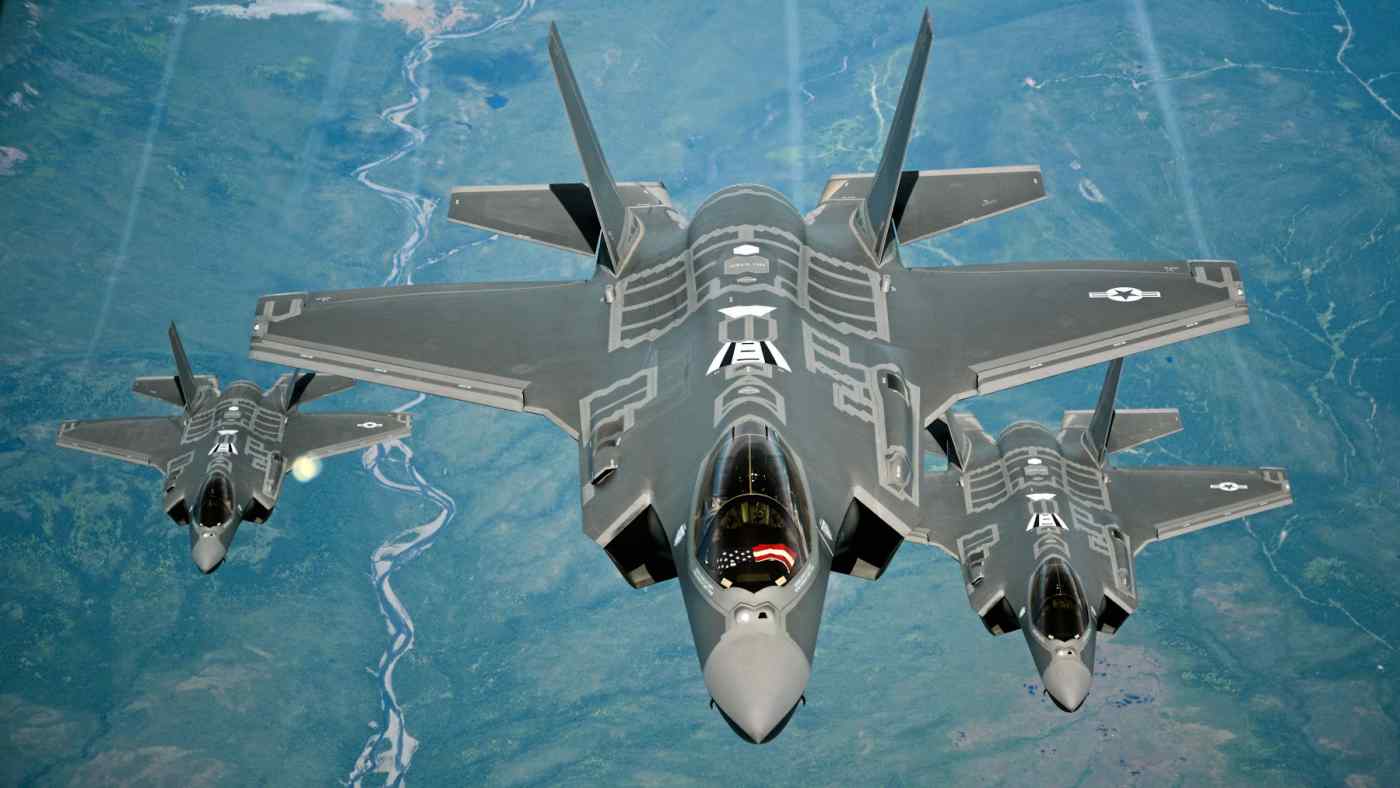 F-35A Lightning II aircraft seen during a flight back from the U.K. to the U.S. after participating in an air show. (Photo courtesy of the U.S. Air Force)
WAJAHAT KHAN and KEN MORIYASU, Nikkei staff writersAugust 21, 2020 07:29 JSTUpdated on August 21, 2020 10:00 JST | North America
CopyCopied

NEW YORK -- Bolstered by a historic $32 billion in approved defense sales to allies and partners for the month of July, the Trump administration said Thursday that it is ready to further support Indo-Pacific allies to boost their defense capabilities.

"Just last month, this was our second-highest-yielding month in defense trade for the history of the Department of State," said Clarke Cooper, the department's assistant secretary for political-military affairs, in a video briefing for foreign media.

The bulk of that figure came from Japan's $23.1 billion purchase of 105 units of the F-35 Joint Strike Fighter aircraft, he said.

A listing of U.S. arms sales to partners in 2020 indicates an aggressive offering of air and naval platforms in the Indo-Pacific region. These include eight Osprey aircraft and related equipment to Indonesia for $2 billion; a $620 million upgrade package for Patriot Advanced Capability-3, or PAC-3, missiles to Taiwan; $250 million in support and upgrades to South Korea's Peace Krypton reconnaissance aircraft; and AH-64E Apache and AH1-Z Viper attack helicopters as well as scout, assault, and light support boats to the Philippines for around $2 billion.

The U.S. will "march forward" with partners, Cooper said, and continue to ensure that they and America "are interoperable with each other." An AH-64 Apache helicopter at Kunsan Air Base in South Korea. The Philippines received the green light to purchase six from the U.S. for $1.5 billion in April. (Photo courtesy of the U.S. Air Force)

This comes at a time when the Washington has rejected Beijing's maritime claims in the South China Sea; bolstered diplomatic partnerships with countries in the region; and conducted Indo-Pacific naval exercises with partners in order to play out different scenarios with China in mind.

"Deepening security cooperation with 'like-minded partners' is of paramount importance, and arms sales of this nature would support countries residing in the First Island Chain to improve their anti-access and area denial (A2/AD) capabilities to resist Chinese military coercion," said Derek Grossman, senior defense analyst at the California-based RAND Corp, referring to a group of islands -- including Japan's main islands, Okinawa, Taiwan, the northern Philippines and the Malay Peninsula -- that China considers a strategic line of defense.

"By improving the A2/AD capabilities of countries within the First Island Chain, Beijing will hopefully think twice about flexing naval, coast guard, and maritime militia muscle out of concern that a miscalculation could escalate into armed combat that could bring in the U.S. -- especially in the case of U.S. treaty allies like the Philippines," he said.

But as the U.S. expands its ring of friends in the Indo-Pacific, the legacies of another era stand in the way.

Washington's defense cooperation relationship with India is "expanding," Cooper said of China's democratic neighbor and rival, which ranked as the world's second-largest arms importer for the last five years in tracking by the Stockholm International Peace Research Institute. But even as it has bought less and less in weapons from Moscow over that period, New Delhi has long been its biggest customer.

Cooper hopes to change this. India recently engaged in a mountain skirmish in the Himalayas with China that left it with a bloody nose -- 20 Indian Army soldiers killed by an outsize People's Liberation Army force -- and also engaged in a rare air force dogfight with rival Pakistan in 2019 that led to one of its Soviet-era MiG-21s getting shot down by a U.S.-supplied Pakistani F-16.

The gaps in its defenses stood exposed and spurred a rethink regarding a defensive realignment, including buying more weapons from the U.S. But even though Washington wants New Delhi's business, it draws the line on certain defense procurements from Moscow. 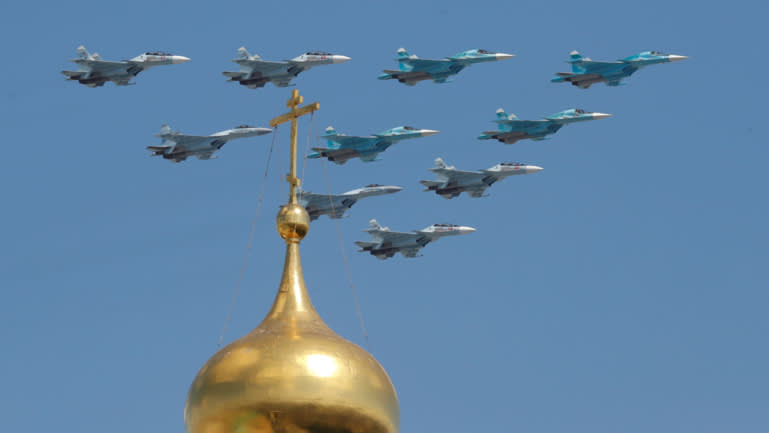 Russian combat aircraft fly in formation during the Victory Day Parade in Moscow on June 24. The U.S. wants India to steer clear of Su-35 fighters and other Russian hardware that would prove "problematic" down the road in terms of interoperability.   © Reuters

Many of these states' threat perceptions "have intensified as China has displayed a more assertive and aggressive approach throughout the region," he said. "For instance, Indonesia and the Philippines have recently confronted aggressive Chinese fishing vessels backed by armed escorts."

"These state-of-the-art arms platforms certainly will enhance states' capabilities to protect their sovereign territory and to the extent Chinese claims and actions are deemed threatening to that territory" through encroachment in exclusive economic zones, and "they are in an indirect way arguably contributing to the U.S. vision of 'freedom of navigation and commerce,'" Lalwani said. "It's true that for security reasons, advanced Russian and American hardware will have a hard time linking up with each other," he said. "Those Indian choices on Russian arms will certainly create some complications in that they might limit some advanced arms the U.S. is willing and able to sell India ... and impose limits on U.S. and Indian forces and equipment operating with each other."

RAND's Grossman thinks that it may not be that easy to decouple India from Russian arms. "India's traditionally close partnership with Russia dating back to the Cold War and its non-aligned foreign policy have been limiting factors in the recent momentum of U.S.-India security ties," he said. "I expect the U.S. to stand firm" on the issue of the S-400 and the Su-35, he said.

But he added that "India also appears to be standing firm, so something will have to give if the U.S. and India are to continue their cooperation under the Indo-Pacific strategy to counter and compete with China."

On arms sales to Taiwan, in addition to America's commitment to provide Taiwan with self-defense capabilities as stipulated in the 1979 Taiwan Relations Act, Cooper said that "there is also a very deep and abiding interest in making sure that there is cross-strait stability, and making sure that we maintain that deep and abiding interest in the cross-strait peace."

While saying that there is no change in policy toward Taiwan, he said: "We are making sure that we are going to address self-defense capabilities for Taiwan" in light of the heightened tensions in the Taiwan Strait.