US attacks China's Communist Party as pandemic clash boils over NEW YORK -- U.S. Secretary of State Mike Pompeo verbally pummeled China's leadership as "ideologically and politically hostile" a day after the two countries engaged in a heated exchange of words right up to the end of the World Health Organization's annual meeting.

"I want to begin today with a few observations on China," Pompeo said Wednesday, appearing at the State Department press briefing room. "The media's focus on the current pandemic risks missing the bigger picture of the challenge that's presented by the Chinese Communist Party," he said.

Noting that China has been ruled by "a brutal, authoritarian regime," since 1949, the year the People's Republic of China was founded, Pompeo said that for several decades the U.S. had hoped that trade, scientific exchanges and diplomatic outreach, as well as China's inclusion into the World Trade Organization, would make the Asian nation "become more like us."

But, he emphasized, there has been no such outcome.

"We greatly underestimated the degree to which Beijing is ideologically and politically hostile to free nations," Pompeo said. "The whole world is waking up to that fact."

The top U.S. diplomat echoed a 20-page report released by the White House on the same day, titled the "United States Strategic Approach to the People's Republic of China."

The document highlighted the need for "a fundamental reevaluation" of how the U.S. understands and responds to the leaders of the world's most populous country and second largest national economy. 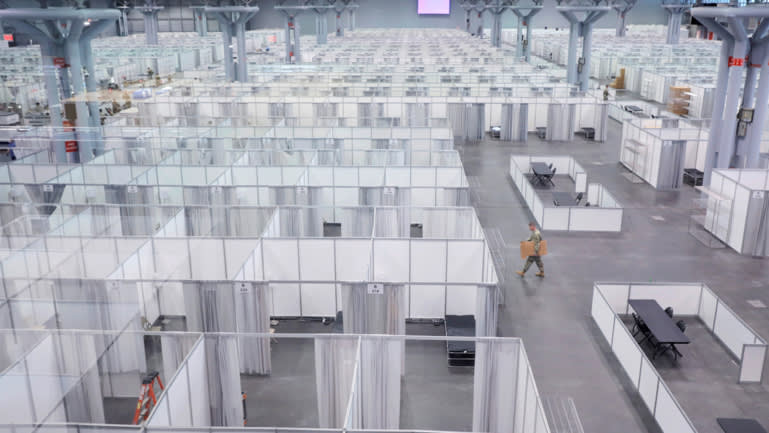 New York's Jacob Javits Convention Center was converted into a medical station during the coronavirus outbreak, with cubicles set up to accommodate patients.     © Reuters

At his news conference, Pompeo went on to criticize the Communist Party's response to the COVID-19 outbreak in Wuhan, saying it has "accelerated our more realistic understanding of communist China."

Pompeo accused the party of choosing to destroy live virus samples instead of sharing them with the international community, adding that Beijing continues to deny investigators access to relevant facilities and censors discussion of the pandemic within China.

He called its contributions to fighting the pandemic "paltry compared to the cost that they have imposed on the world."

Pompeo said the party's failures have led to a plague that has cost roughly 90,000 American lives, more than 36 million Americans jobs and around $9 trillion in damages globally.

After criticism leveled by President Donald Trump in a letter to WHO Director-General Tedros Adhanom Ghebreyesus over the organization's response to the pandemic, China accused the U.S. leader of attempting to slander Beijing and shift blame for what it called the U.S.'s mishandling of the crisis.

Pompeo also followed up on his rare congratulatory statement regarding the beginning of the second term of President Tsai Ing-wen of Taiwan, with which the U.S. does not have official diplomatic relations. "The democratic process in Taiwan has matured into a model for the world," Pompeo said. "Despite great pressure from the outside, Taiwan has demonstrated the wisdom of giving people a voice and a choice."

Taiwan was the focus of U.S.-China bickering at the close of the WHO meeting in Geneva, where they clashed over the issue of its attendance, which Beijing opposes.

Meanwhile on Capitol Hill, the Senate unanimously passed legislation that could prevent Chinese companies from listing on U.S. exchanges unless they are subject to U.S. audits that show they are not under the control of a foreign government.

The "Holding Foreign Companies Accountable Act" states that if a company was not audited by the Public Company Accounting Oversight Board for three consecutive years, its securities would be banned from the exchanges.

The measure, sponsored by Republican Sen. John Kennedy and Democratic Sen. Chris Van Hollen, needs to pass the House of Representatives and be signed by Trump to become law.

"There are plenty of markets all over the world open to cheaters, but America can't afford to be one of them," Kennedy said in a statement.

"For too long, Chinese companies have disregarded U.S. reporting standards, misleading our investors. Publicly listed companies should all be held to the same standards, and this bill makes commonsense changes to level the playing field and give investors the transparency they need to make informed decisions," Van Hollen said.