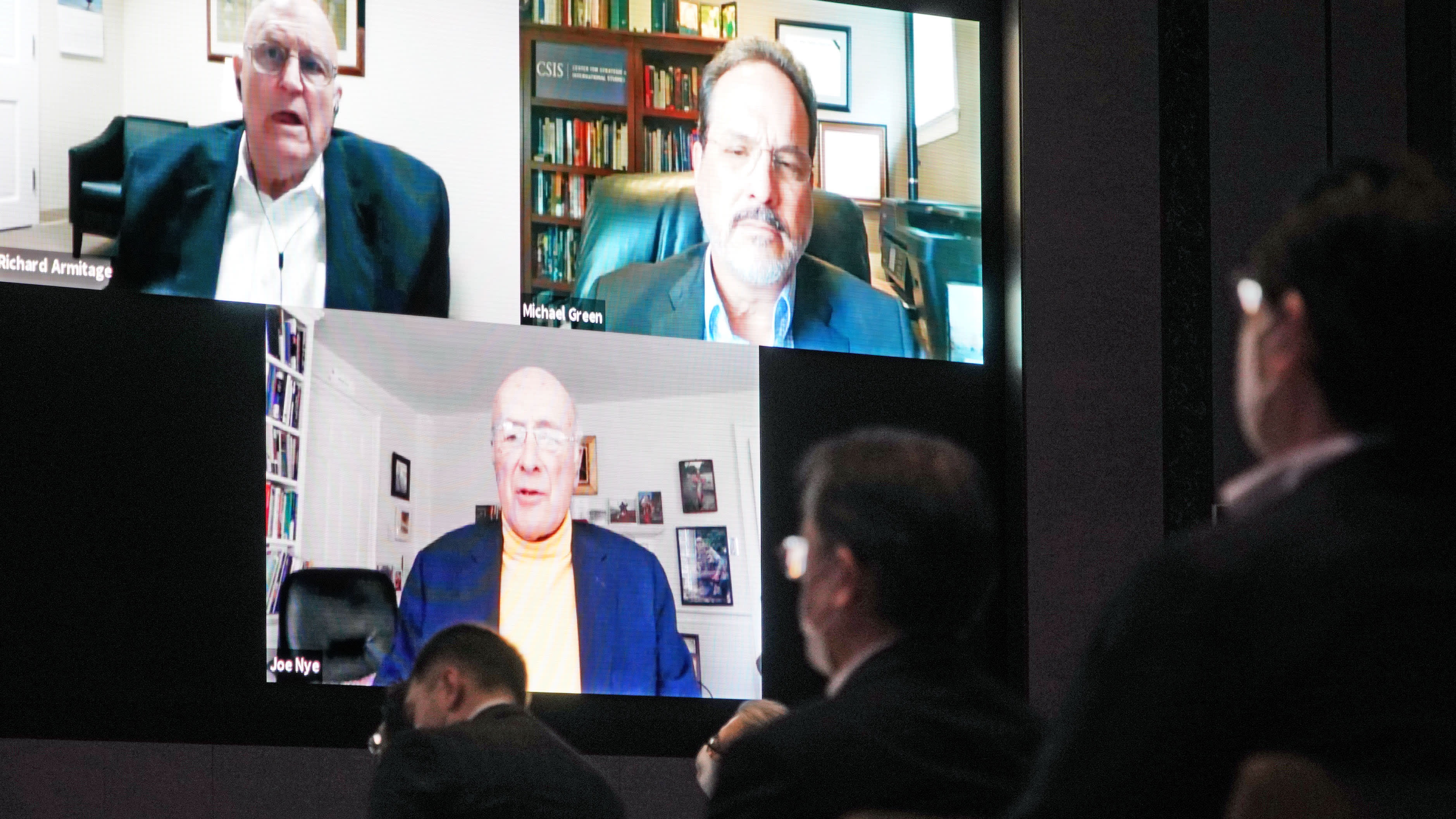 TOKYO -- The U.S. and China are not in a "new Cold War" and their nuanced, complicated relations unavoidably include both cooperation and rivalry, former U.S. diplomats and high officials said on Friday.

During two panels in the 17th Nikkei-CSIS security symposium, speakers acknowledged Japan for assuming responsibility in upholding the liberal international order while the U.S. took a step back from global leadership.

"America's strategy for dealing with China these past few years has been telling other countries you're either with us or with them. No one is going to make that choice to go against China," said John Hamre, president of the CSIS and former deputy secretary of defense in the Clinton administration.

The event, hosted each fall by Nikkei and the Center for Strategic and International Studies, a Washington think tank, was held partially online this year due to the coronavirus pandemic.

Panelists also agreed that referring to the rivalry between the U.S. and China as a new Cold War does not accurately describe the situation. Kurt Campbell, a former assistant secretary of state for East Asian affairs under the Obama administration, said this "obscures more than it illuminates" and leads the public discourse to "simplistic ideas and solutions." From left, Akihiko Tanaka, Kurt Campbell, James Steinberg, and Shinichi Kitaoka attend a panel discussion of CSIS/Nikkei symposium in Tokyo on Oct. 23. (Photo by Yo Inoue)

Campbell praised Tokyo's deft balancing of Washington and Beijing. "Japan leads the pack here," he said, pointing to Japan's efforts to "keep the flames burning on things that they hope the U.S. might return to," such as the Trans-Pacific Partnership, the giant trade deal that President Donald Trump withdrew from early in his presidency.

Such actions have downgraded the U.S. in the eyes of its traditional allies, as reflected in opinion polls by the Pew Research Center surveying respondents in the U.K., Canada, Germany, France and Japan.

"Given how badly China has behaved, it's the ultimate 'own goal' for the United States to have done worse," he said, using a soccer metaphor.

Earlier in the program, Japanese reform minister Taro Kono criticized China's provocative actions in contested territories while using "health diplomacy" -- aiding with vaccines and masks -- to quiet dissent as its neighbors grappled with the coronavirus pandemic.

If Southeast Asia fully falls under China's influence, the U.S.-Japan alliance's strategy for a free and open Indo-Pacific region will not work, said Shinichi Kitaoka, president of the Japan International Cooperation Agency.

"Our goal should be to prevent them from falling into the hands of China, so we should support their independence and security," Kitaoka said.

But China has also ventured farther and more frequently into Japanese airspace and waters this year, prompting a discussion of how much risk the U.S. should take to defend Japan if China attacks the disputed Senkaku Islands.

Michael Green, the CSIS Japan chair and the former special assistant to the president and senior director for Asian affairs at the National Security Council under the George W. Bush administration, pointed to a recent CSIS poll of policymakers and business leaders as well as the public that showed a fairly high expectation that the U.S. should come to Japan's aid.

Nye echoed Campbell's earlier comments on why the U.S.-China competition is not a cold war. "There are areas where we're going to have intense rivalry with China as China tries to exert its increasing power, but there are also areas where we must and should cooperate," he said, naming climate change and pandemics.