WARSAW/BERLIN -- The U.S. government is using visits to Eastern Europe by top officials as an opportunity to try to tighten the net around Chinese telecommunications equipment maker Huawei Technologies, hinting that it could withdraw security cooperation from nations that do not cooperate.

Washington has "made clear that if they make a certain set of decisions, that it will be more difficult for the United States Department of Defense to work alongside of them -- that is, we'll never put our equipment in a place which would present risk to our technology from having Chinese technology collocated alongside of it," Secretary of State Mike Pompeo said on Tuesday.

Given the region's proximity to Russia, many Eastern European countries are reluctant to risk their relationships with the U.S. Several are NATO members, and Romania hosts an Aegis Ashore missile-defense system operated by the U.S. military, while another is under construction in Poland.

In Warsaw on Wednesday, U.S. Vice President Mike Pence praised Poland's arrest last month of a Huawei sales director and a former Polish intelligence officer on spying allegations. The move shows "your government's commitment to ensure our telecommunications sector is not compromised in a way that threatens our national security," he said in a joint press statement with Polish President Andrzej Duda.

While Washington has long regarded the Chinese telecommunications giant as a security risk, the clash has escalated in recent months alongside the trade war with China. American officials have called on Western allies, Japan and others to avoid telecom equipment from the company. 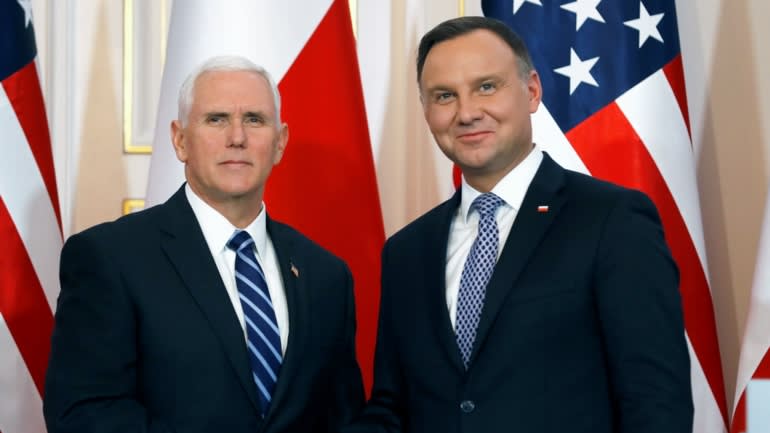 The U.S. is urging Eastern European countries in particular to stop working with Huawei because their status as relatively fragile democracies has made them targets for Beijing, a State Department official said.

Since 2012, China has cooperated with Eastern and Central European nations under its so-called 16+1 framework, building friendly ties through infrastructure projects and other economic support. The congressional U.S.-China Economic and Security Review Commission warned in November that "Beijing has attempted to influence policy in Europe" through this initiative.

As for Huawei itself, its products are reportedly 20% to 30% cheaper than those of competitors, making them especially appealing to countries looking to improve their infrastructure under tight fiscal constraints.

The response to Washington's demands has been mixed. Hungary is still looking to Huawei for fifth-generation, or 5G, wireless infrastructure. In a joint news conference with Pompeo on Monday, Foreign Affairs and Trade Minister Peter Szijjarto hit back at criticism on this point from the U.S. chief diplomat, noting that two of Huawei's major European partners are German and British.

Slovakia will not treat Huawei products as a security threat, according to American and European media reports. The Czech Republic has yet to decide on a response amid a split within the government.

Huawei itself has objected to the U.S. campaign against the company as well. "To prove ourselves as a trustworthy partner, we are open to suggestions from all European governments, customers, and partners," Abraham Liu, the company's chief representative to European Union institutions, said on Monday.