US presses for bilateral trade pact while Japan remains cautious 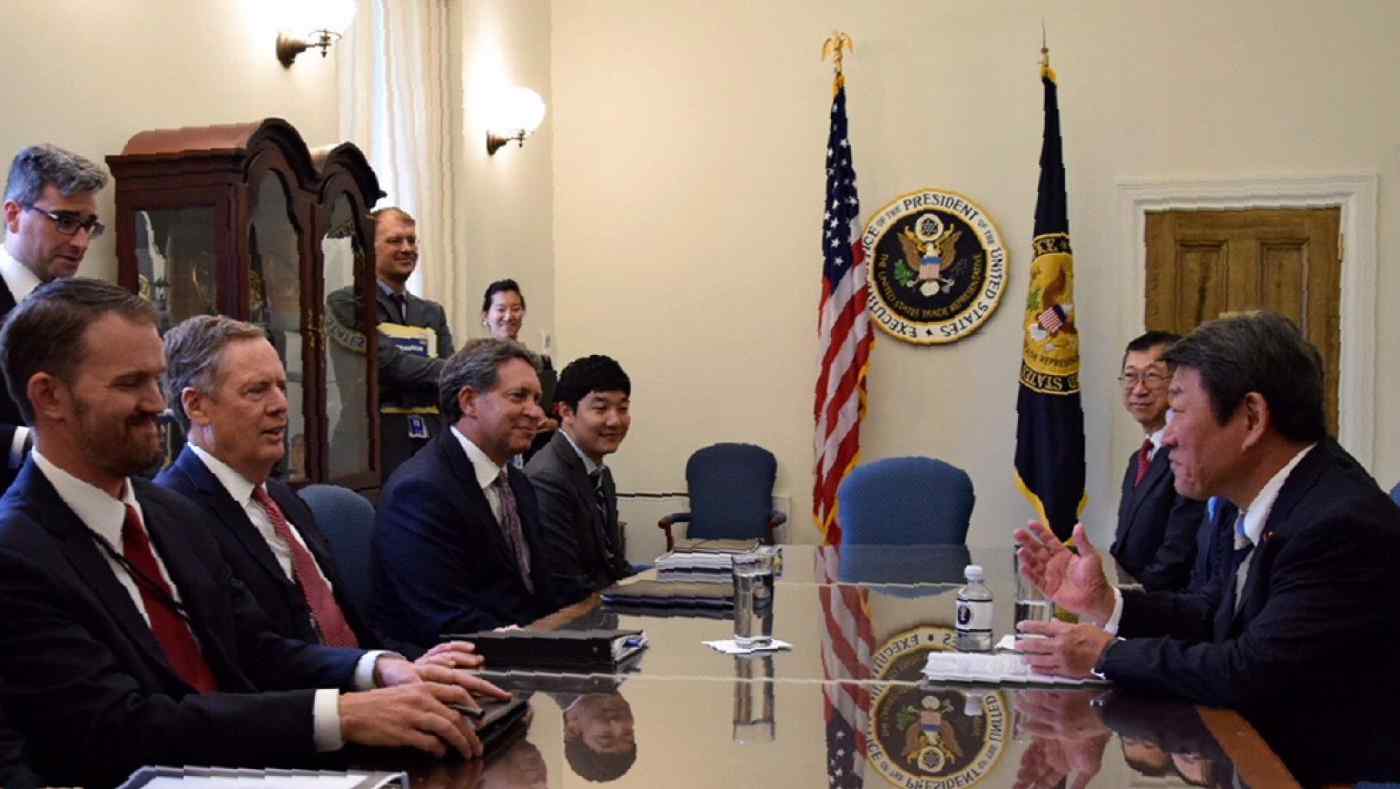 WASHINGTON -- U.S. and Japanese trade negotiators started a new round of talks here on Thursday, with Washington pushing for a bilateral free trade agreement and Tokyo seeking a return to multilateralism.

Toshimitsu Motegi, Japan's economic and fiscal policy minister, and U.S. Trade Representative Robert Lighthizer met for more than two hours in their initial session. This marks the first "free, fair and reciprocal" trade negotiations, which have been arranged following comments made by U.S. President Donald Trump on the need to correct the trade imbalance between the two countries at a joint news conference with Japanese Prime Minister Shinzo Abe on June 7.

At a news conference following the meeting, Motegi said, "The U.S. seeks to proceed with bilateral negotiations."

"Our stance is that the TPP is best for both Japan and the U.S.," he said, referring to the Trans-Pacific Partnership trade agreement that Trump withdrew America from after taking office last year.

Lighthizer did not mention the term "FTA" during the meeting, but described the framework as "bilateral," according to Motegi.

"We came to a better understanding of each other's positions and views," Motegi told reporters. However, he refrained from commenting on whether the two sides had discussed opening Japanese markets to agricultural products such as beef.

Unable to reach an agreement on Thursday, the two sides have agreed to extend the talks through Friday.

The meeting comes as Trump calls for the imposition of additional tariffs of up to 25% on imported cars and parts, which, if implemented, would have a considerable impact on Japanese car exporters.

For Motegi, the objective for the FFR talks was to highlight the direct investments Japanese companies have made on American soil, as well as future spending plans. Increasing Japanese purchases of U.S. liquefied natural gas and military equipment is also on the table, addressing Trump's call to adjust the bilateral trade imbalance.

But the Japanese government is wary of the potential for Washington to try and kick-start FTA negotiations by threatening to impose tariffs on imported cars.

In a congressional hearing on July 26, Lighthizer expressed his intent to pursue a U.S.-Japan FTA. "We ought to be negotiating an FTA with Japan," he said.

Lighthizer's call for a two-way free trade agreement comes during the lead-up to the midterm congressional elections in November. Trump seeks a victory he can use to increase turnout among his supporter base.

The Japanese side fears that a bilateral deal is all but guaranteed to mean tariff reductions on its farm exports. Abe is looking to avoid any major concessions before next summer's upper house election, especially in the face of pressure from the agriculture sector.

"Don't make these talks an exploratory discussion platform for a free trade agreement" between Japan and the U.S., a member of Abe's ruling Liberal Democratic Party said.

Tokyo hopes to find common ground with Washington in such areas as economic cooperation and a coordinated China policy. However, at least one Japanese government source voiced worry that a trade-off for avoiding higher vehicle duties would be agreeing to FTA discussions.

Both sides are looking to secure a preliminary agreement before Trump meets with Abe on the sidelines of next month's U.N. General Assembly session. The Japanese leader hopes to get Trump on board with a concrete plan for reducing the trade imbalance.