US pushes for transatlantic coalition against China 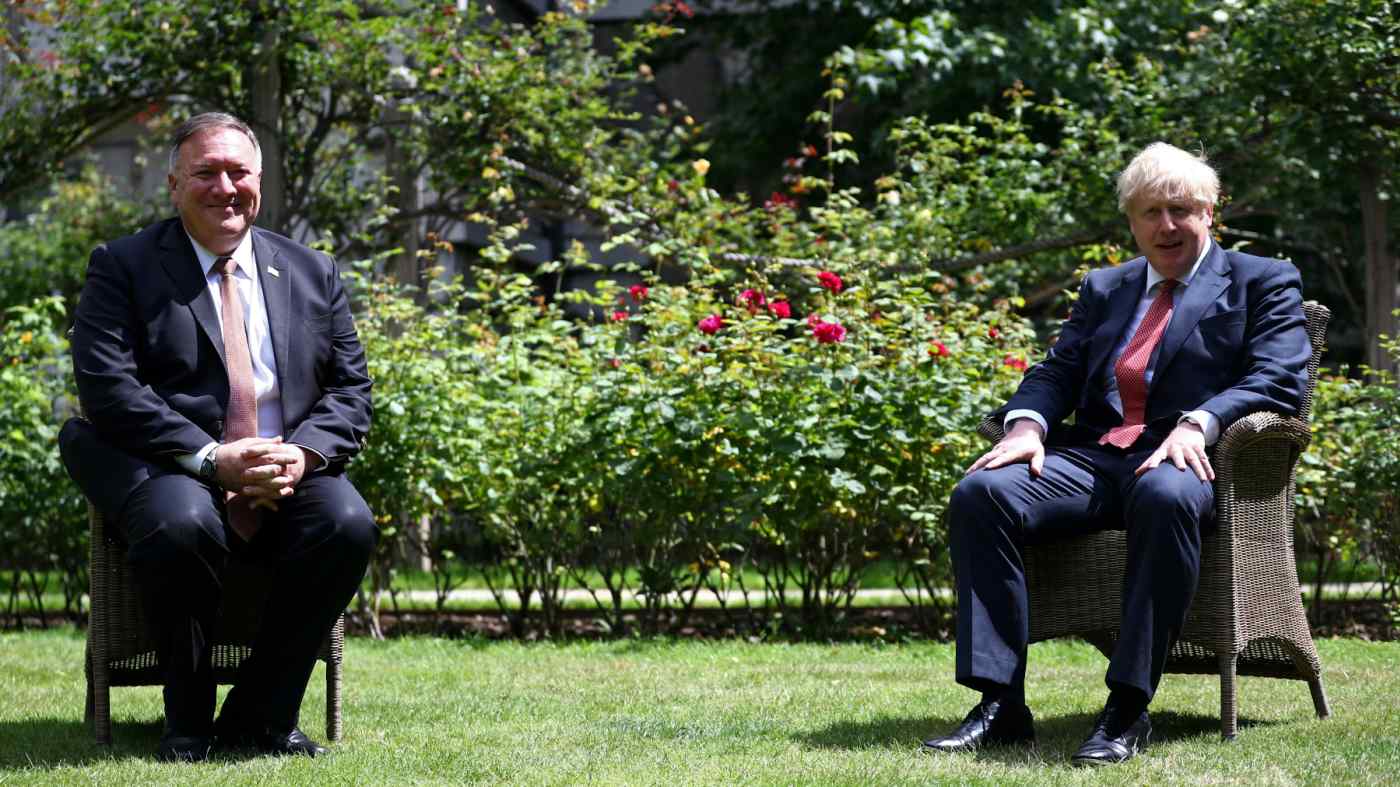 "Social distance does not imply diplomatic or political distance," he said.

The face-to-face visit in the middle of a pandemic aimed to send a signal of U.S.-U.K. unity -- both to China and to other European countries -- as Washington seeks to tighten the net around Beijing.

Johnson and Pompeo expressed concerns about China's crackdown on Hong Kong and its treatment of the country's Uighur Muslim minority in Xinjiang, while affirming cooperation in dealing with Beijing, according to London. The two reportedly also discussed Huawei Technologies, China's largest telecommunications company, whose products the U.K. plans to remove from its networks by 2027.

Pompeo's visit "recognizes the recent British decision over Huawei, which has been very warmly welcomed by the U.S. administration," and aims to push other European countries to follow London's example, said Nile Gardiner of the Heritage Foundation, a conservative American think tank.

With distrust toward China mounting amid the coronavirus, the U.S. sees a golden opportunity to sway more countries to its side.

In an online event Tuesday held by the International Institute for Strategic Studies, U.S. Defense Secretary Mark Esper expressed interest in visiting China this year while again urging allies and NATO members to keep Huawei out of their networks.

Otherwise, "we would doubt the security of those networks, and that would severely impact our ability to share intelligence with our allies and our ability to conduct operational planning," Esper said.

Peter Rough, senior fellow at the conservative Hudson Institute in Washington, thinks the U.S. will have an easier time forming a transatlantic coalition against China compared with before the coronavirus pandemic, though not necessarily because of the American diplomatic blitz.

In a poll last month by the Tony Blair Institute for Global Change, 60% of British respondents and 55% in France said their views of the Chinese government had worsened since the start of the pandemic -- even more than the 54% in the U.S. Germany was not far behind with 46%.

This shift in public opinion will "make it harder for politicians to not act" on China, the institute concluded.

Though Washington has been frustrated by European countries putting their economic interests first in dealing with China, it sees the coronavirus crisis and the Hong Kong crackdown as catalysts for a shift in attitude.

But Beijing is working to drive a wedge into the transatlantic partnership.

If European Union members block Huawei from their 5G networks, the Chinese government might bar Finland's Nokia and Sweden-based Ericsson from exporting competing products made in China, according to U.S. media.

Beijing also may retaliate against the U.K. for suspending its extradition treaty with Hong Kong over China's new security law covering the former colony.

American policy toward Europe may prove self-defeating on this front. The U.S. State Department signaled last week that it is willing to impose sanctions on individuals and companies investing in the Russia-to-Germany Nord Stream 2 gas pipeline project.

If Washington imposes sanctions on a German company, "you're impacting ... German jobs potentially, and you turn what could be a purely international political matter into something where the German government now has to deal with things on the domestic front, too," said Brian O'Toole, a former U.S. Treasury Department official who worked with sanctions. "So it makes the German government angrier."

Washington is also at odds with France over taxes and trade, recently slapping 25% tariffs on many French goods in response to a digital tax imposed by Paris that would hit American tech giants.

Meanwhile, President Donald Trump's decision to withdraw American troops from Germany is forcing a rethink of the U.S.-European deterrence posture toward Russia. Washington argues that Russia is a lesser threat than China, but many in Europe worry more about the threat right next door.