US rush to Bangladesh revs up economic race with China 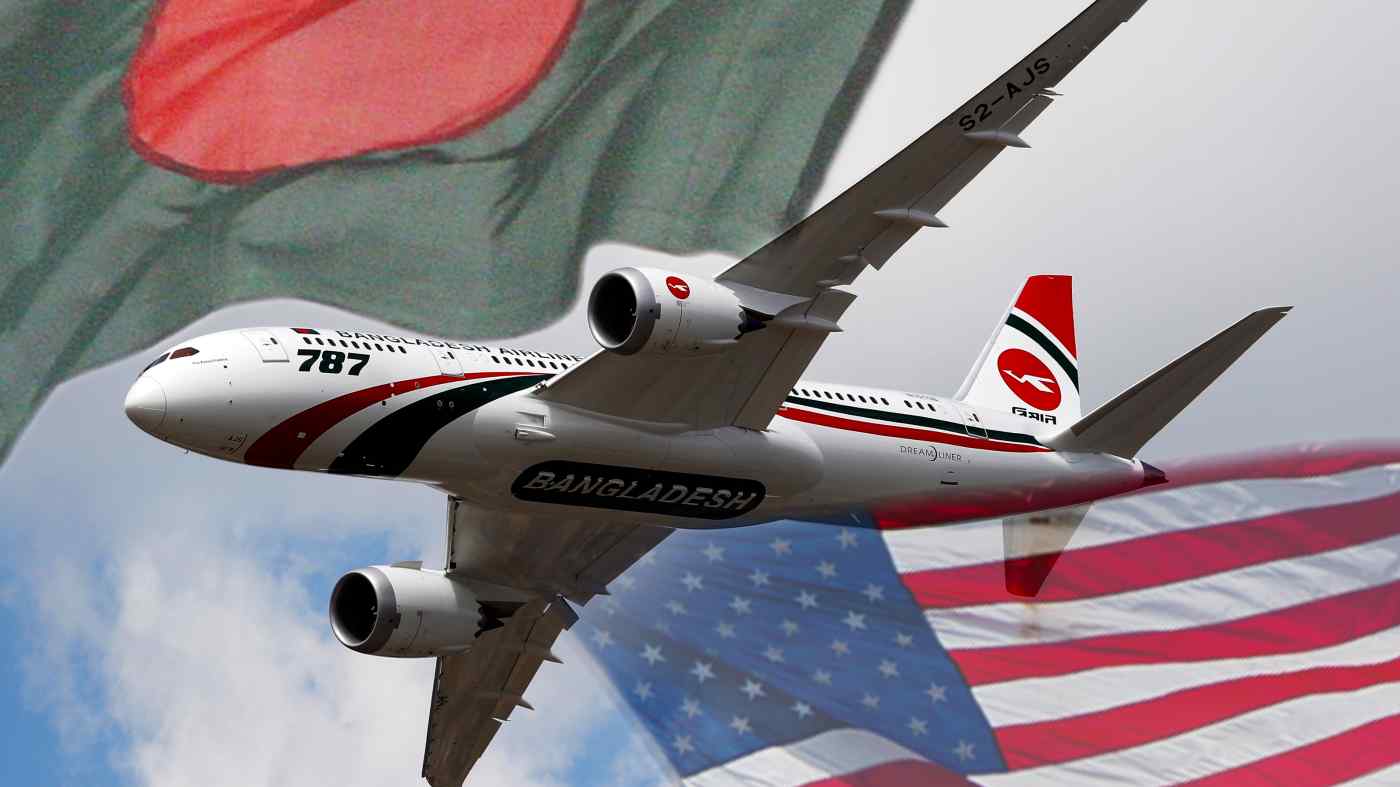 An air service agreement between Bangladesh and the U.S. is just one sign of growing relations between the countries. (Source photo by Reuters)
A.Z.M. ANAS, Contributing writerOctober 6, 2020 21:01 JST | Bangladesh
CopyCopied

DHAKA -- The U.S. has ratcheted up economic diplomacy with Bangladesh, holding its first high-level dialogue virtually and signing an open sky agreement in Dhaka as part of Washington's blueprint to challenge China's presence in the region.

Regardless of the ongoing presidential campaign, the U.S. is rushing to counter China's growing clout in South Asia, with its Indo-Pacific strategy seen as a key pillar of foreign policy, no matter who is in the White House.

The dialogue was held virtually on Sept. 30, in which Keith Krach, U.S. undersecretary of state for economic growth, energy and the environment, agreed to ask American companies to invest in Bangladesh's energy, IT, pharmaceutical and agriculture sectors.

The virtual dialogue coincided with the inking of an air service agreement in Dhaka on the same day, which paves the way for direct flights between Bangladesh and the U.S. under Washington's Open Skies policy that came into force on Wednesday.

The aviation pact will "further expand our strong economic and commercial partnership, promote people-to-people ties, and create new opportunities for airlines, travel companies and customers," the U.S. Department of State said in a statement. 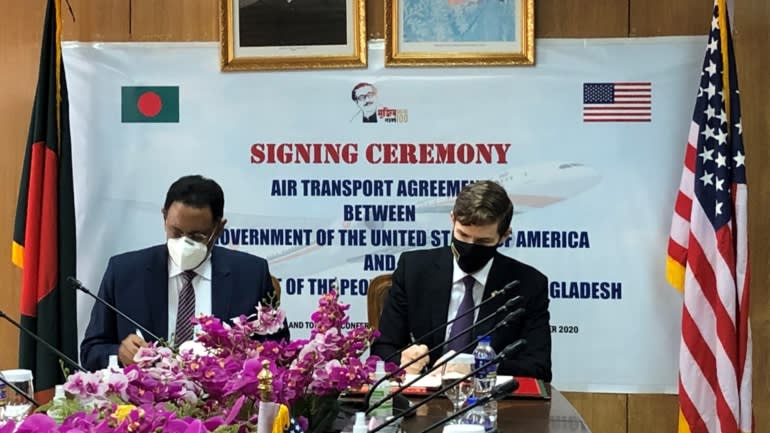 The U.S. is home to an estimated 500,000 Bangladeshis. The accord will help Bangladesh's national flag carrier Biman revive its Dhaka-New York route, which was suspended in 2006 on commercial grounds.

The Asian Development Bank has projected Bangladesh's economic growth to reach 5.2% this year, while most other Asian economies have contracted.

Both countries have developed closer relations in the past few years, driven by economic and defense cooperation. The U.S. Department of Defense has already recognized Bangladesh as an "emerging" partner in the Indo-Pacific alliance, and the two countries opened talks about sales of American military gear last year.

However, analysts see Dhaka's relationship with Washington as a work in progress, owing to its close ties to Beijing. Bangladesh recently gave a $250 million airport terminal construction contract to China, which responded by removing tariffs on 97% of Bangladeshi products. The U.S. and Bangladesh started talking about military deals last year, such as Washington selling Apache helicopters and other equipment.   © Reuters

"Bangladesh has demonstrated pragmatism in charting its foreign policy course," Delwar Hossain, a professor of international relations at Dhaka University, told Nikkei. He added, however, that it may be discomfiting for China to see Bangladesh-U.S. relations getting warmer, while Washington chafes at the Dhaka-Beijing romance.

"[But] neither side wants to leave Bangladesh," Hossain said. Part of the reason, he explained, is that Bangladesh is the only remaining country in South Asia that can offer significant demand for both American and Chinese exports compared with the tiny island nations of Sri Lanka and the Maldives. India and Pakistan are already firmly allied to the U.S. and China, respectively.

The U.S. represents the largest export market for Bangladeshi products, with a $7 billion trade surplus favoring Dhaka. In contrast, Bangladesh's trade deficit with China -- its largest source of imports -- totaled $12 billion last year. Beijing also supplies Dhaka with over 70% of its imported arms.

Rahman, who led the Bangladesh side in the recent consultations with the U.S., dismissed the notion that the aviation deal would sour "excellent" relations with China. "Our business environment is improving [and] we're investing in infrastructure," Rahman said.

Dhaka-Beijing economic cooperation has deepened since Chinese President Xi Jinping's visit to Bangladesh in 2016, when he committed more than $20 billion in loans to 27 projects under his Belt and Road Initiative. 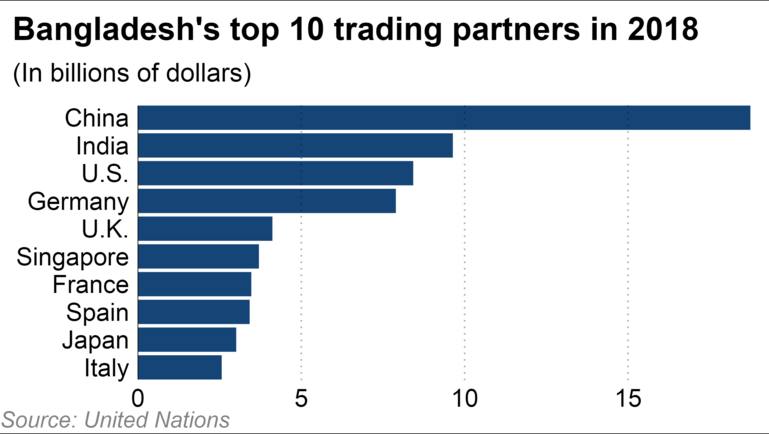 "We [have] to walk a fine line. We [have] to play the card diplomatically for the long term interests of Bangladesh," Ahsan H. Mansur, executive director at the Policy Research Institute, a Dhaka-based think tank, told Nikkei.

Hossain of Dhaka University echoed Mansur's view, saying that though the partnership with the U.S. is "important," Bangladesh must lean on China to bankroll its infrastructure projects since America's financial firepower is far from adequate.

If the Democratic challenger Joe Biden wins the November U.S. presidential elections, Mansur predicted no "major change" in global politics as well as in Washington's Indo-Pacific strategy, with India as a regional partner. Like Trump, Biden's objective will be to compete with China, which is now the world's second-biggest economy.

But Mansur, who had earlier headed the Gulf Cooperation Council unit of the International Monetary Fund, posed the question: "Why should Bangladesh go into that game?"

He underlines the importance of maintaining a neutral foreign policy, but also added that "the No. 2 will overtake the No. 1 in the not too distant future."