Pompeo says 'Quad is revived' and calls for democracies to unite NEW DELHI -- The U.S. desires a "new age of ambition" in its relationship with India and sees the country as a rising defense and security partner in the Indo-Pacific and globally, Secretary of State Mike Pompeo said Wednesday.

"We see each other for what we are, great democracies, global powers and really good friend," he said, signaling the Trump administration's intent of building up the relationship as a counterbalance to China.

The mention of India as a security partner comes as the two countries hold joint naval drills in the Indian Ocean. Those exercises are being held parallel to a trilateral exercise between the U.S., Japan and Australia in the Philippine Sea.

While the twin drills are not coordinated, the fact that the four countries are simultaneously conducting military exercises in the wider Indo-Pacific is seen by analysts as more than a mere coincidence.

The four countries form the Quadrilateral Security Dialogue, or "Quad," an informal strategic forum between Canberra, New Delhi, Tokyo and Washington, which Beijing has previously expressed reservations about for its potential to contain China in the Indo-Pacific.

"We've also revived the so-called Quad, comprised of the U.S., India, Japan and Australia," Pompeo said in his message. 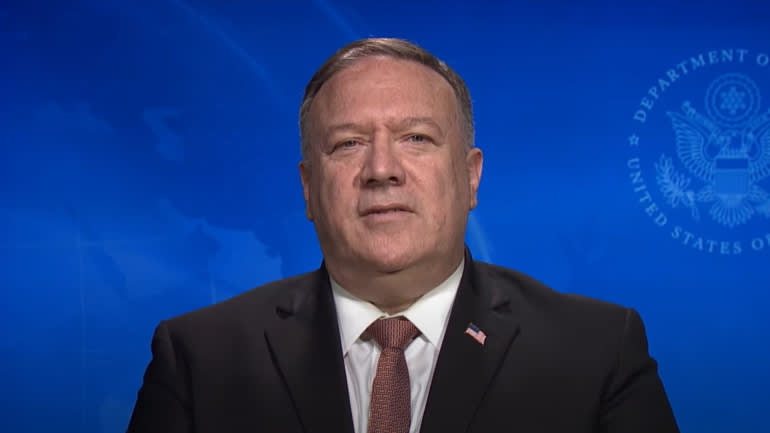 "It's important that democracies like ours work together, especially as we see more clearly than ever the true scope of the challenge posed by the Chinese Communist Party," Pompeo said. "Our infrastructure projects, our supply chains, our sovereignty and our people's health and safety are all at risk, if we get it wrong."

His comments came on a day when the U.S. announced the closure of the Chinese consulate in Houston and amid strains in Sino-India ties following last month's clashes between their troops in eastern Ladakh along their disputed Himalayan border , leaving 20 Indian soldiers dead.

"The recent clashes initiated by the [People's Liberation Army] are just the latest examples of the CCP's unacceptable behavior," Pompeo said. "I'm confident that with our concerted efforts we can protect our interests."

The parallel military exercises in the Indian Ocean and the Philippine Sea come days after the U.S. said Chinese claims in the disputed South China Sea have no legal basis.

In a move that will further cement the security aspect of the Quad, India is also reportedly planning to invite Australia to its annual Malabar naval exercise with Japan and the U.S. later this year. India rejected Australia's participation in 2018 out of consideration to Beijing and an invitation this year would signal a major shift in position.

"Now it is time our partnership plays an important role in helping the world bounce back faster after the [coronavirus] pandemic," Modi said. "American investors often look out for the perfect timing to enter a sector or a country. To them, I would like to say: There has never been a better time to invest in India."

"We've also invited Prime Minister Modi to the next G-7, where we will advance the economic prosperity network," Pompeo said. "It's a group of countries and organizations that we consider natural partners because we share the same values like democracy and transparency and the rule of law."