US to press Japan on currency in trade talks TOKYO -- The chief U.S. trade negotiator has hinted that he will bring up currency issues in trade talks with Japan, moving beyond the scope of the goods-focused deal that Tokyo had in mind.

U.S. Trade Representative Robert Lighthizer said in a congressional hearing on Wednesday that he aims to go to Japan in March to kick off negotiations.

"We feel a certain urgency, a real urgency because of the combination of market access from TPP and Europe," he said, referring to the reworked Trans-Pacific Partnership regional trade pact and the Japan-European Union economic partnership agreement, which took effect in December and February, respectively.

Lighthizer noted that "there are a lot of places in Asia," including Japan, where currency manipulation has been a problem, suggesting that he could seek a provision in the trade deal to curb competitive devaluation.

Japanese Chief Cabinet Secretary Yoshihide Suga told reporters Thursday that Tokyo "anticipates constructive discussions toward a mutually beneficial relationship, based on the Japan-U.S. joint statement from last September." That statement makes no reference to currency issues, which Japan considers separate from negotiations on goods and says should be handled by finance officials.

Tokyo worries that a currency provision could open the door for Washington to take aim at the Bank of Japan's monetary policy by arguing that its goal is to push down the yen. Upward pressure on the currency would work against Prime Minister Shinzo Abe's economic policy. 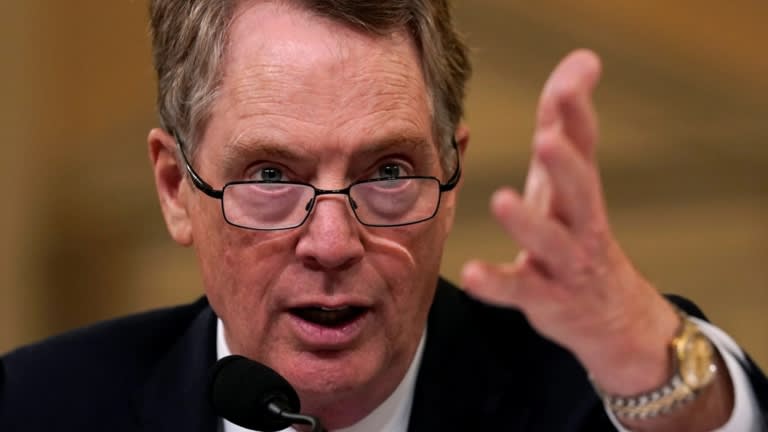 U.S. Trade Representative Robert Lighthizer told lawmakers Wednesday that currency manipulation has been a problem in "a lot of places in Asia," including Japan.   © Reuters

The currency issue could keep Lighthizer and Japan's top trade negotiator, Economic and Fiscal Policy Minister Toshimitsu Motegi, from reaching a consensus when they look to define the scope of the negotiations at their first meeting. Tokyo also would object if Washington tried to bring up topics such as Japan's drug-pricing system that fall under the umbrella of services.

The talks are already set to cover sensitive issues for Tokyo. Washington is pushing for Japan to open up its agricultural markets and limit auto exports to the U.S., as well as boost investment in America and scrap nontariff barriers.

The two sides are working to pin down a schedule. Tokyo on Thursday suggested starting talks in April instead, with a visit by Motegi to Washington. While Japanese officials generally see a March meeting as unrealistic, they hope to get negotiations moving before U.S. President Donald Trump's planned trip to Japan in late May.

Lighthizer is talking now about a specific time frame for negotiations with Japan -- which could have started at any time since late January -- because the U.S. seems to be approaching the endgame in its negotiations with China. Trump recently announced that he would delay a planned tariff increase, and he is expected to meet with Chinese President Xi Jinping in late March to sign an agreement.

Tokyo aims to make some headway on trade talks before Abe and Trump meet in June on the sidelines of the Group of 20 summit in Osaka, in hopes of showcasing its close relationship with the U.S. Some observers see a final deal taking a year or so to negotiate.