US urges allies to spend 2% of GDP on defense, citing China threat NEW YORK -- Washington is urging its allies to increase military spending to at least 2% of their gross domestic product to counter China, putting pressure on Japan to take a more assertive military role in the region.

"To our allies and partners around the world ... we urge you to increase your defense spending to at least 2% of GDP, and to make the needed investments to improve your capabilities and capacity, just as we are doing with our armed forces," to achieve their shared goals, U.S. Defense Secretary Mark Esper said Wednesday at a Rand Corp. event.

Esper cited "Beijing's aggression and disregard of its commitments in the South and East China Seas," among its "attempts to reshape and undermine the international order that has benefited nations large and small."

His proposition could have Japan, which has been pursuing a stronger alliance with the U.S., more than double its defense budget.

Washington has been calling for Tokyo to share more of the burden for their collective security in the Indo-Pacific as China's influence in the region continues to rise. 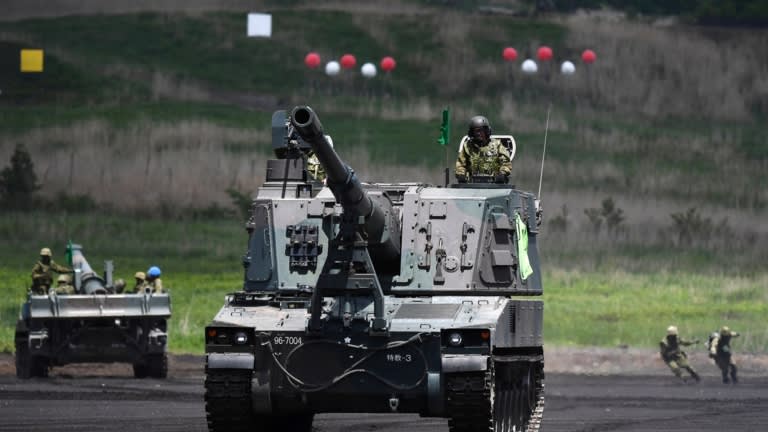 The Japan Ground Self-Defense Force's annual live-fire exercise at the Higashi-Fuji firing range near Mount Fuji. Japanese defense spending falls far short of 2% of GDP even under the calculation method of NATO, which casts a wider net than Tokyo.   © Reuters

Japan has approved fiscal 2020 defense spending of 5.31 trillion yen ($50.5 billion), a record high but still just 0.9% of its GDP. In 2019, then-Defense Minister Takeshi Iwaya estimated the medium-term percentage at up to 1.3% under NATO's calculation method.

The Asian country has been careful to keep its defense budget under 1% of GDP in a so-called minimalist approach to security, conscious of concerns from neighboring South Korea and China, which have not forgotten World War II.

China announced this May a 2020 draft defense budget of 1.27 trillion yuan ($187 billion). The country's military spending has hovered around 2% of GDP since 2000, according to the Washington-based Center for Strategic and International Studies.

Over the past year, Beijing has stepped up its activity near Japanese-administered Senkaku Islands, which it claims as the Diaoyu. It denies having an expansionist agenda.