US uses defense diplomacy to woo Bangladesh away from China DHAKA -- The U.S. has stepped up efforts to entice Bangladesh into buying more of its military hardware in recent weeks, as it hopes to win over an "emerging" ally in South Asia, where China has been expanding its economic influence.

The two countries opened talks on the sale of advanced military gear such as Apache helicopters and missiles last year. A deal is believed to be in the cards, although no details have been revealed, with Laura Stone, a deputy assistant secretary with the U.S. Department of State, saying that Congress had not yet been "formally notified." Any deal will frustrate China, which is now the biggest supplier of cheaper defense equipment.

"We're looking to deepen our security cooperation with Bangladesh, which is very much of mutual interest, with full respect for Bangladesh's sovereignty and independence of action," Stone wrote in an email response to questions posed by the Nikkei Asian Review recently.

"We stand ready to serve as the partner of choice for Bangladesh regarding the sale of defense articles," said Stone, who oversees India, Bangladesh, Nepal, Sri Lanka, Bhutan and the Maldives at the State Department's South and Central Asian affairs desk. Bangladesh has been buying more arms from the U.S. since the 1990s, with purchases reaching $110 million in the 10 years through 2019. But that is dwarfed by the $2.59 billion it spent on military equipment from China since 2010, according to the Stockholm International Peace Research Institute.

Ali Riaz, distinguished professor of political science at Illinois State University, said that the timing of the phone call between the U.S. defense secretary and Bangladesh's prime minister was "very important" because of Dhaka's warming relations with Beijing.

China's influence in Bangladesh goes beyond trade and infrastructure investment. After the COVID-19 pandemic took hold, China sent supplies, such as masks and gowns, and a medical team to Bangladesh to advise on the pandemic response. In addition, a Phase 3 trial of a vaccine developed by the privately owned Chinese company Sinovac Biotech is in progress.

Beijing recently lifted tariffs on 97% of Bangladesh imports after it secured a $250 million airport terminal construction contract in the northeastern city of Sylhet, which borders India.

Bangladesh is now trying to corral a $1 billion Chinese credit line to manage the Teesta River after a deal to share its water with India languished for years, mainly due to opposition from the state of West Bengal on the Indian side.

Bangladesh has been treading a fine line between India and China, but now Washington has taken a proactive approach.

"The Bangladesh government will have to balance conflicting expectations. Bangladesh can do it if the national interests remain the primary consideration," Riaz wrote in an email to Nikkei. Bangladeshi air force in a fly pass during a national celebration. The country has spent $110 million in arms from the U.S. but $2.59 billion in similar from China in the ten years to 2019.   © Reuters

Defense diplomacy is part of Washington's broader Indo-Pacific strategy. In June 2019, the Department of Defense released its first report on the strategy, in which it recognized Bangladesh as an "emerging partner," alongside Sri Lanka, Nepal and the Maldives in South Asia.

"Our Indo-Pacific vision is rooted in the fact that the United States, like Bangladesh, is an Indo-Pacific country," Stone told Nikkei. "Maritime and regional security in South Asia are critical to ensuring a free, open, peaceful, and prosperous Indo-Pacific region for the benefit of all its nations, which is why we prioritize efforts that promote security."

The growing influence of China in the region, and Bangladesh's participation in Chinese President Xi Jinping's signature Belt and Road Initiative, have made it imperative for the U.S. to vigorously pursue its Indo-Pacific agenda, said Riaz, who is also a senior fellow with the Atlantic Council, a Washington think tank.

The U.S. and Bangladesh have already collaborated on security in a range of areas, from counterterrorism to peacekeeping, under a foreign military financing scheme started in 2005. Since 2018, it has dispensed an additional $60 million to help pay for Bangladesh's maritime security and address other issues of critical concern. 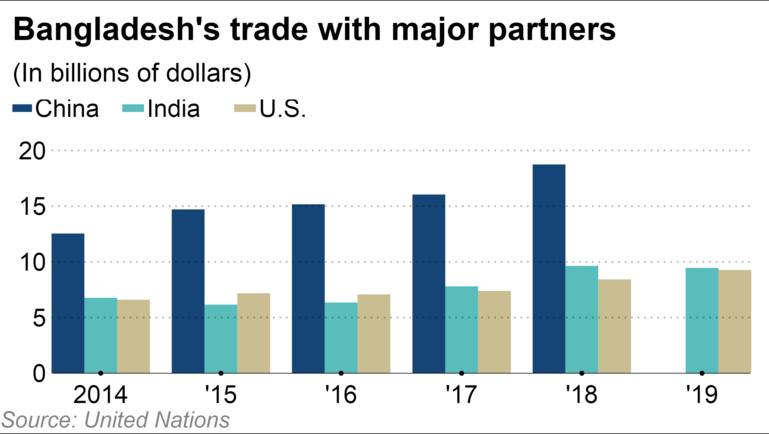 The U.S. administration is "aggressively pushing" the Indo-Pacific gambit to counteract China's BRI, of which Bangladesh has been a part since 2016, according to Amena Mohsin, a professor of international relations at Dhaka University. "The U.S. wants partnership on the war on terrorism [and] partnership on arms sales," she told Nikkei. "Bangladesh has strategic importance."

M. Humayun Kabir, a former ambassador to the U.S. who is now acting president of the Bangladesh Enterprise Institute, a Dhaka think tank, said this puts Bangladesh in a tricky position. "This will be difficult for Bangladesh, as it is a friend of both the U.S. and China," said Kabir.

According to an official data, the U.S., with which Bangladesh enjoyed almost $7 billion in trade surplus in 2019, is the country's single largest export destination, while the South Asian economy of 170 million people has a chronic trade deficit -- totaling $12 billion in 2019 -- with China, its largest source of imports.

Riaz of Illinois State University predicted a shift in U.S. policy toward South Asia, with more engagement, if Joe Biden is elected president in November. But he believes it "won't be more accommodative to China's growing influence."