U.S. Marines over the South China Sea. The waters are disputed by China and a host of Southeast Asian countries, including Vietnam. (Photo courtesy of the U.S. Navy)
Nikkei staff writersMay 21, 2020 01:48 JST | Vietnam
CopyCopied

HO CHI MINH CITY -- The CEO of Bayer Vietnam faces up to 70 million dong ($3,000) in fines for disseminating a map of the South China Sea that included the so-called nine-dash line, which China uses to demarcate its claims on the waters.

The Ho Chi Minh City government summoned Bayer's local chief Lynette Moey Yu Lin on Friday to inform her that she will be fined for violating Vietnam's regulation banning the spread of illegal information and images regarding Vietnam's sovereignty through a personal email.

According to Ho Chi Minh City's Department of Information Technology and Communications, Lin admitted that she had emailed a document named "COVID-19, lesson from China" containing the nine-dash line to nine people in the company.

The final fine has yet to be determined and will be announced within seven days. It will range from 25 million to 70 million dong.

The summoning and fine reflect Vietnam's stronger resolve against the dissemination of the nine-dash line map of the South China Sea -- better known as the East Sea in Vietnam -- amid heightened tensions in the region. 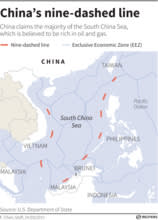 In recent years, maps of the South China Sea with the nine-dash line had been presented at various events, including conferences and trade or tourism fairs. But the Vietnamese authorities' responses were mainly to reprimand the offenders and to ask the distributors to withdraw the documents.

These soft-handed approaches had stoked public anger, with citizens criticizing the government for not standing up to China's aggressive sovereignty claims. They pointed out that Hanoi was losing the propaganda campaign against Beijing.

At a motor show last year, a Volkswagen Touareg CR745J was confiscated after it was found installed with a GPS navigation software that used a map that included the nine-dash line. The importer was fined.

Earlier this year, Hanoi announced a new regulation, which allows local authorities to suspend business licenses of any automakers or traders that import apps that run maps with the nine-dash line.

Meanwhile, many Chinese enterprises working in Vietnam use maps and images containing the nine-dash line for online games and cultural products. Vietnamese authorities have asked the public to report on these "illegal actions."

China claims sovereignty over about 80% of the South China Sea, almost all the energy-rich waters of the sea where it has established military outposts on artificial islands, but neighboring countries including Vietnam, the Philippines, Brunei and Malaysia also have overlapping claims.