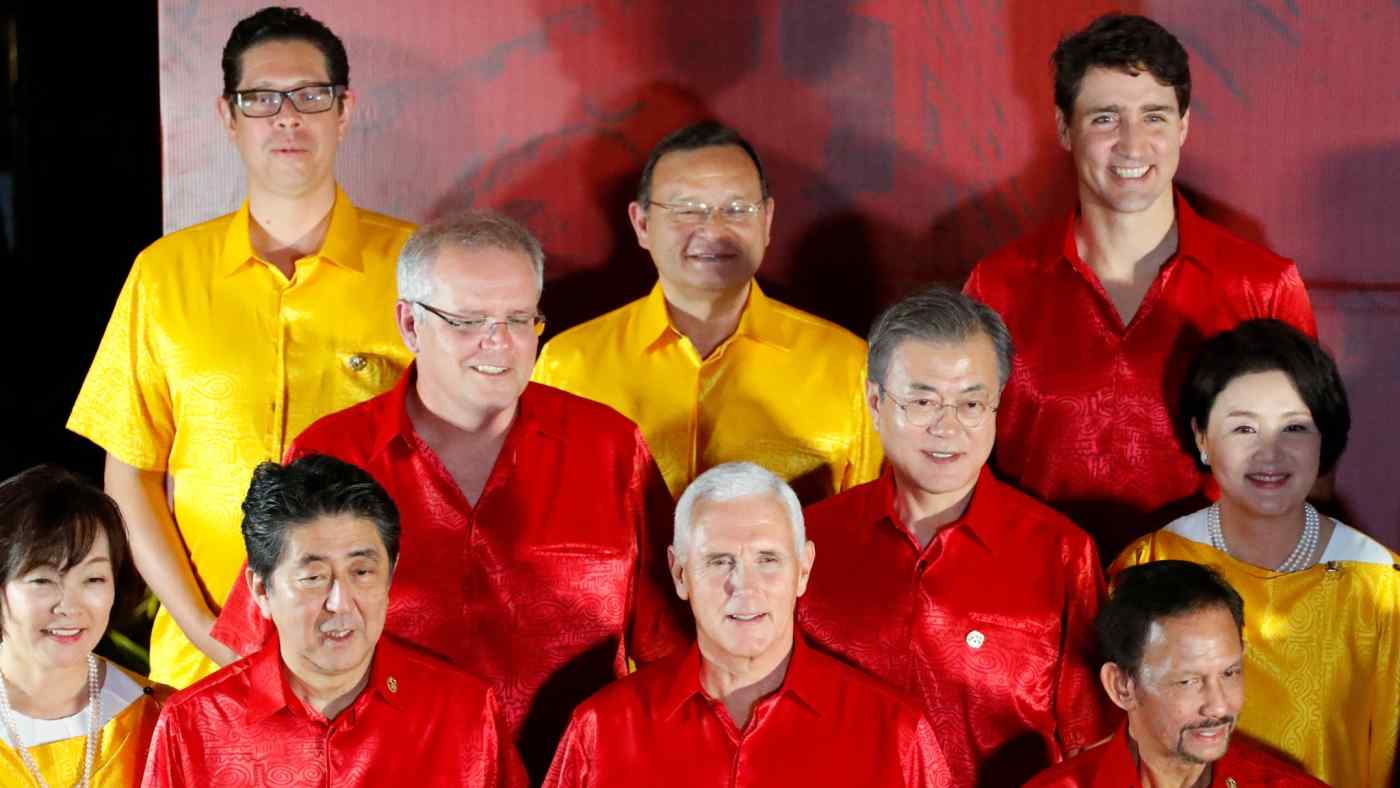 SEOUL/PORT MORESBY -- The Japanese and South Korean leaders skipped bilateral talks on the sidelines of international summits in Singapore and Papua New Guinea last week as the two sides remain deadlocked over a recent court ruling regarding wartime laborers.

Japanese Prime Minister Shinzo Abe and South Korean President Moon Jae-in shook hands and exchanged greetings before the "family photo" at the Asia-Pacific Economic Cooperation summit on Sunday. They also chatted twice in Singapore on Thursday and once in Port Moresby on Saturday, according to the Japanese government. No details about those brief conversations have been provided.

But formal talks did not materialize in light of tensions over the South Korean Supreme Court's Oct. 30 decision ordering Nippon Steel & Sumitomo Metal to compensate laborers forced to work for the company during World War II. It appears unlikely for the two sides to find a way to resolve their differences anytime soon.

To Tokyo's consternation, Seoul still has yet to say how it will deal with the issue, three weeks after the ruling was handed down. The Japanese government has denounced the court's decision, with Abe calling it "unthinkable in light of international law" and Foreign Minister Taro Kono arguing that it "fundamentally upends the legal basis for bilateral relations."

South Korea's Foreign Affairs Ministry criticized these comments on Thursday as "not at all helpful in resolving the issue."

In this climate, even if Abe sat down with Moon, he likely would have been able to do little more than reiterate Tokyo's position that individual claims to compensation were "settled completely and finally" in a 1965 agreement and urge Seoul to take speedy action.

The next opportunity for the two leaders to meet will be at the Group of 20 summit kicking off Nov. 30 in Argentina.

The ruling has also prompted the Japanese and South Korean chambers of commerce to postpone their annual meeting.

The leaders of the two chambers were scheduled to meet last week in the South Korean city of Busan. But the Japanese Chamber of Commerce and Industry insisted on discussing the Nippon Steel decision. The Korea Chamber of Commerce and Industry urged the Japanese side to change its mind. When that failed, the South Korean group asked to postpone the annual meeting. The two sides are not expected to reschedule.

In response to the ruling in Seoul, the JCCI had issued a statement with the Japan Business Federation and similar groups urging the South Korean government to take measures to protect Japanese business activities there. The ruling "could become an obstacle to investment and business in South Korea, and hurt strong economic ties between the countries," the statement said.

But the KCCI wants to keep political issues at arm's length. Moon's progressive government uses the chamber as its main link to business leaders, and the organization is loath to put this relationship at risk.

The South Korean government has said it aims to work out a course of action on the forced-labor ruling within the year. Prime Minister Lee Nak-yon met on Nov. 13 with academics, former diplomats and other experts to gather opinions on how to move forward.

Seoul plans to set up a joint public-private committee to work out a solution, but what this might look like remains unclear. The government may take a hard line against Japanese businesses, in line with the Supreme Court ruling, in order to respect the independence of the judicial branch.

The outlook for mending the South Korea-Japan rift looks likely to dim further. Decisions on two other forced-labor cases are due Nov. 29 and Dec. 5, and Seoul plans to announce within the month the dissolution of a foundation to support wartime "comfort women" set up as part of a controversial 2015 deal with Japan.