Who will be the next victim of China crisis?

TOKYO -- China's "One Belt, One Road" initiative has opened the door to financial crisis for its trading partners, and more are sure to follow.

China-driven worries are casting a dark shadow over the global market, with crude oil and other commodity prices crashing. A series of misfortunes has set equity markets worldwide dropping like dominoes. Many countries are coming under growing pressure to distance themselves from the star of the show in global growth -- China.

Amid global market turmoil, a sign of deeper trouble has appeared in Central Asia.

Unable to maintain its currency peg, Kazakhstan shifted to a floating exchange rate Aug. 20. For that Asian nation, China is a crucial trading partner.

China's devaluation of the yuan has begun to drag down other emerging currencies. Uncertainty over the weakening of Kazakhstan's tenge is sparking jitters among Western market players, because the low-key Asian player is an oil exporter.

Other currencies of resource-rich countries, including Brazil, Russia and South Africa, could soon follow suit. Slumping Chinese demand is delivering a heavy blow to resource exporters. 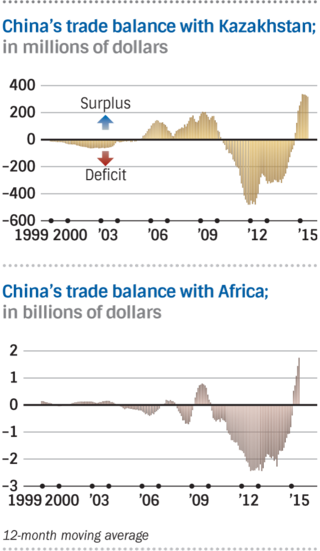 Take Kazakhstan. For that country, China is a neighbor and valued customer. China's trade balance with Kazakhstan had been in a deficit since 2010 as China's oil imports climbed. But it turned to a surplus in 2014. The reason is that China's economic slowdown has dampened the nation's appetite for oil. This hurt Kazakhstan's trade balance, leaving the country with no option but to scrap its currency peg.

A similar trend can be seen with China's trade balance with African countries, many of which depend on resource exports.

After the 2008 collapse of U.S. investment bank Lehman Brothers, the government of then President Hu Jintao introduced a 4 trillion yuan ($624 billion) stimulus package, helping the country become a major economic power capable of snapping up resources in countries across the globe. China has gained a greater voice in the international economy, giving it a push to establish the Silk Road Fund and the Asian Infrastructure Investment Bank.

However, despite those factors, China's golden days may have already peaked. The country has begun to lose its resource-buying clout in Africa, with its trade balance with African countries logging a surplus since the middle of last year. For such countries, China has long been a supplier of foreign currency, but now it has become a buyer.

China's weak demand is sending crude and other prices lower on international commodity markets, severely effecting the economies of resource-rich countries, which are suffering from sharp declines in their exports to countries other than China as well.

Many emerging economies are resource exporters with close ties with China. As such, they are holding a ticking time bomb of dollar-denominated liabilities, which they have piled up as central banks have loosened their policies. They have become less capable of earning foreign exchange through China-bound exports, while the dollar's rise is increasing the burden of such liabilities.

If another currency crisis happens, the hot spot will probably be one of those countries. In addition, if any of the emerging countries default on their debt due to a lack of dollars, it could spark a dollar panic on global financial markets.